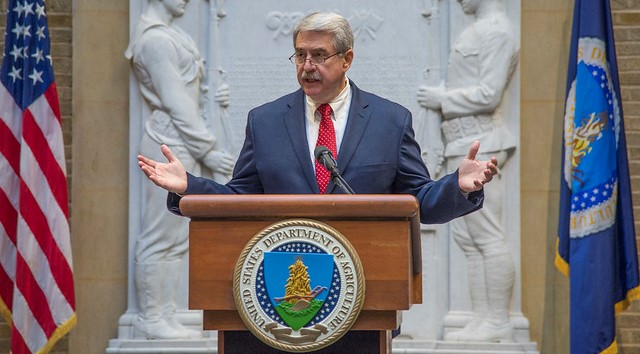 WASHINGTON — Throughout 2019, the U.S. Department of Agriculture (USDA) continued to deliver on its promise to pursue free, fair and reciprocal trade and open markets around the world for America’s farmers, ranchers, and agribusinesses.

“From North America, to Europe, to Asia, to Africa, we’ve made major strides this year in both the policy and marketing arenas,” McKinney said.

While continuing the push towards final passage of the U.S.-Mexico-Canada Agreement, which is widely supported by the U.S. agricultural community, the United States also inked a trade agreement with Japan that will enable nearly 90 percent of U.S. food and agricultural exports to enter that country either duty free or with preferential tariff access.

“Meanwhile, as the United States continued working towards a historic trade deal with China that will improve economic conditions in agriculture and across the economy, we successfully defended U.S. wheat, corn, and rice interests against China at the World Trade Organization.” McKinney noted.

“While trade agreements and trade mitigation payments may have garnered more headlines, we can’t forget about the ongoing market development and export assistance efforts by FAS that continued to make a major difference in U.S. exporters’ bottom lines in 2019,” McKinney noted.

In 2019, FAS hosted six agricultural trade missions and supported exporter participation in 22 international trade shows that together resulted in nearly $3 billion in projected 12-month sales of U.S. farm and food products around the globe. FAS also facilitated $2 billion in exports of U.S. commodities to Latin America, Africa and the Middle East, and Asia through the GSM-102 Export Credit Guarantee Program and helped numerous countries around the world improve their agricultural systems, boost food security, and effectively engage in global trade through FAS fellowship and exchange and food assistance programs.

“USDA’s day-to-day efforts to break down barriers and pursue export opportunities also resulted in new or expanded market access for numerous U.S. farm products in 2019,” said McKinney. “A few worth noting included securing full access for beef to Argentina and Japan, improving access for beef to the European Union and wheat to Brazil, preserving access for shell eggs to Mexico, opening the Tunisian market to beef, poultry, and eggs, and opening the Indian and Vietnamese markets to U.S. blueberries.”

FAS staff around the globe also assisted U.S. exporters in releasing hundreds of shipments that were detained at ports of entry in overseas markets.  The agency’s many interventions ensured that more than $95 million of perishable products arrived safely at their final destinations. Among them were shipments of turkey to Chile, soybeans to Pakistan, citrus to Peru, almonds to Spain, beef to Germany, and even zoo animals (giraffes) to Taiwan.

“Finally, one of the greatest, though less spoken about, victories of 2019 was our ability as a department to demonstrate U.S. agriculture’s leadership on the global stage,” McKinney noted. “Thanks to his tremendous leadership and the support of the FAS team, Secretary Perdue brought together Western Hemisphere agriculture leaders in common pursuit of science-based policies and regulations that promote agricultural innovation and foster global food security. USDA was also instrumental in organizing Hemisphere-wide support for such policies through the Inter-American Board of Agriculture.

“I believe that no victory is too small when it comes to the pursuit of free, fair and reciprocal trade,” said McKinney. “And thanks to the unwavering support of this Administration and the dedicated staff at FAS, there have been many victories this year for America’s farmers, ranchers, workers, and businesses in the international arena. I’m confident there will be even more in 2020.”

At each end of Pacific, skepticism over China farm purchases