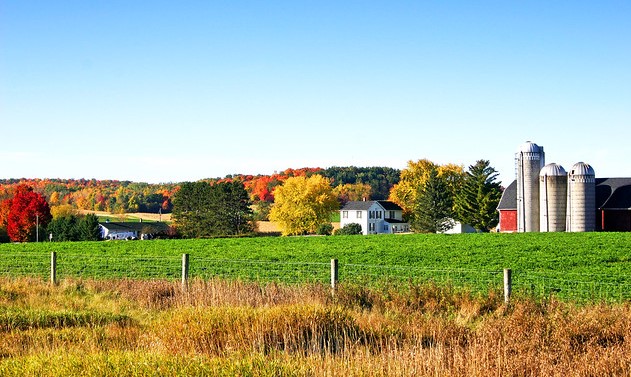 "We need to build on our previous actions to make sure that agriculture can thrive in the Empire State for generations to come," stated State Comptroller Thomas P. DiNapoli. (Randen Pederson, Flickr/Creative Commons)

“Agriculture is an essential part of New York’s economy,” DiNapoli said. “Farms generate billions of dollars in sales, provide jobs and enhance our quality of life. But farmers face challenges including fluctuating milk prices, threats from a changing climate and disrupted trade relations. We need to build on our previous actions to make sure that agriculture can thrive in the Empire State for generations to come.”

The state boasted more than 33,400 farms, employing more than 55,000 workers in 2017, according to the latest available data from the U.S. Department of Agriculture. Farms are located in every region of the state, covering nearly 23 percent of New York’s total land area, with 96 percent of those family owned.

While the total number of farms and acreage declined from 2007 to 2017, their overall economic impact increased as net farm income grew by more than 20 percent. In addition, the number of certified organic farms increased by over 60 percent from 2012 to 2017.

New York ranks as a national leader for a variety of agricultural commodities. Milk is the state’s largest commodity, ranking third for sales nationwide in 2017, with sales of over $2.5 billion. The state leads the nation in the production of yogurt, cottage cheese and sour cream.

New York ranks second nationwide for the production of apples and maple syrup, ranks third for grapes and eleventh for beer. New York is the third largest producer of wine, with its wineries producing nearly 32 million gallons in 2017.

The state has created a variety of policy initiatives to address challenges facing New York farmers, including efforts to limit state and local taxes on agricultural land, farmland protection initiatives, capital investment funds for new farmers, and financial incentives for schools that use locally sourced food.

For more details on agriculture in New York, visit the report at: https://osc.state.ny.us/reports/economic/agriculture-report-2019.pdf