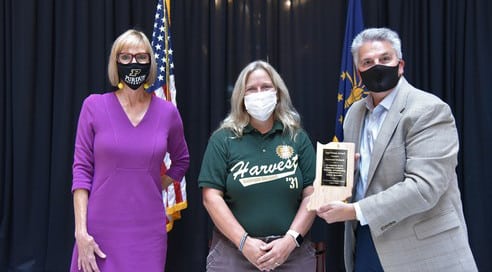 Garwood Orchards and MPS Egg Farms have been awarded the AgriVision Award, the highest agricultural honor from the State of Indiana. This award was presented at the Indiana Statehouse. Pictured at the ceremony are, from the left: Lt. Gov. Suzanne Crouch, Carey Garwood and ISDA Director Bruce Kettler. (Courtesy Photo)

INDIANAPOLIS — Garwood Orchards and MPS Egg Farms have been awarded the AgriVision Award, the highest agricultural honor from the State of Indiana. This award was presented at the Indiana Statehouse by Lt. Governor Suzanne Crouch and Indiana State Department of Agriculture Director Bruce Kettler.

Now in it’s 14th year, the AgriVision Award is presented to businesses or organizations within the Hoosier agricultural community that are advancing the industry, whether that is by developing a new technology, working to address a worldwide issue or creating a better community.

Garwood Orchards is an agritourism destination in LaPorte, Indiana where there is fun to be had for the whole family, along with nutritious locally grown fruits and vegetables.

Garwood Orchards began in 1831 and is now a sixth-generation family owned and operated business by brothers Tom, Mike and Brian Garwood. Their farm produces roughly 500 acres of fresh fruits and vegetables such as sweet corn, tomatoes, peppers and apples for U-Pick, farm markets and wholesale.

This orchard not only features U-pick orchards, wagon rides and live music, they also have a state-of-the-art packing house for fruits and vegetables and the Garwood’s cultivate crops using the latest technologies. During a typical school year, they host local schools and children on tours of their facility.

“We are so thankful to be chosen as an AgriVision Award recipient,” said Carey Garwood from Garwood Orchards. “This award means so much to our family and we were honored to be able to represent our industry and community at the Statehouse today.”

The Garwoods are an exceptional family owned and operated business in Indiana and quite deserving of the AgriVision award for the business they have created and for the nutritious food provided to consumers nationwide.

“These two agricultural operations take technology and community involvement to the Next Level,” said Lt. Governor Suzanne Crouch. “It was an honor to recognize the families and their agricultural businesses at the Statehouse today.”

MPS Egg Farms, one of the largest shell egg producers in the United States, is a sixth-generation family farm business based in North Manchester, Indiana.

The family business, run by Bob, Dan and Sam Krouse, has 630 employees who care for 11 million hens, which produce more than 9 million eggs daily at six farms in Indiana, Illinois and Texas. Each farm is equipped with top-of-the-line equipment and is certified by numerous third-party organizations for quality assurance, animal health and product safety standards.

MPS Egg Farms produces both conventional and cage-free eggs that are delivered to grocery stores and food distributors nationwide. MPS Egg Farms is a national poultry industry leader in the conversion to cage-free egg production, in response to client and consumer demand.

Sustainability and advancing the egg industry are top of mind for owners, Bob, Sam and Dan. Each serve on a number of industry boards such as the United Egg Producers, American Egg Board and Indiana State Poultry Association.

The Krouse family serves as leaders in their trade organizations and the agricultural community by focusing on what is best for the employees, their consumers, their flock and the environment.

As part of their commitment to enhancing the environment, they have installed over 3,000 solar panels at their North Manchester egg production facility.

“MPS Egg Farms is pleased and humbled to be recognized with this prestigious award,” said Sam Krouse, Vice President of Business Development for MPS Egg Farms. “We are proud to be part of Indiana’s storied agricultural heritage and look forward to continuing to work with our industry partners to further our state’s reputation as a global leader in agriculture and food production.”

MPS Egg Farms and the Krouse family had a vision to take egg production in Indiana, and across the U.S., to the next level and they did just that by creating a safe, healthy work environment, keeping poultry welfare a top priority and advocating for the continual success of the poultry industry.

“Garwood Orchards and MPS Egg Farms are pillars in the agriculture industry,” said ISDA Director Bruce Kettler. “The passion they have not only for their own businesses, but their respective communities is exceptional. It was an honor to recognize them and their contributions today at the Statehouse.”

Managing the spread of weeds