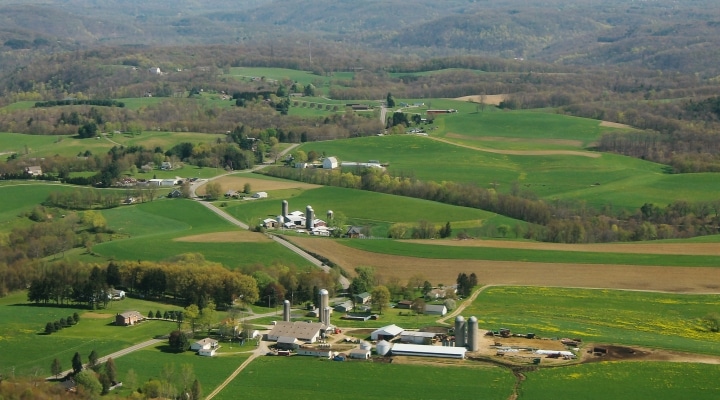 The number of acres of farmland in Pennsylvania fell by 6% between 2012 and 2017, at a time when the state's prime farming regions are experiencing population growth that may create long-term challenges for producers. (photo by formulanone, creative commons/flickr.com)

UNIVERSITY PARK, Pa. — The number of acres of farmland in Pennsylvania fell by 6% between 2012 and 2017, at a time when the state’s prime farming regions are experiencing population growth that may create long-term challenges for producers.

That’s one conclusion of a new report from the Center for Economic and Community Development in Penn State’s College of Agricultural Sciences. “Where the Soybeans Grow: An Exploration of Agricultural Land Use in Pennsylvania, 2017” is based on data from the U.S. Department of Agriculture’s 2017 Census of Agriculture.

The report is part of a series, “Understanding Pennsylvania Agriculture: 2017 Update,” which explores various aspects of the 2017 Census of Agriculture. The ag census is compiled every five years, and the 2017 census results were released in 2019.

According to the report, Pennsylvania is the 32nd largest state in terms of total land area with more than 28.6 million acres, about 25% of which — nearly 7.3 million acres — is farmland. This agricultural land is grouped into four categories defined by USDA: cropland, woodland, pastureland and “other land” dedicated to farming purposes.

The state’s total farmland acreage in 2017 was 6% smaller than it was at the time of the 2012 ag census, noted Timothy Kelsey, professor of agricultural economics and co-director of the Center for Economic and Community Development.

“At the same time, the number of farms in Pennsylvania fell by an even greater amount, 10%, which suggests that some operators who left farming may have sold land to other producers, who kept that land in production,” he said. “This probable consolidation would explain why farmland acreage declined at a slower rate than the decline in the number of farms.”

At the county level, the percentage of total land used for agricultural purposes ranged from virtually 0% in Philadelphia County to about 65% in Lancaster County. Counties with the highest percentage of their total land in farming tended to be in south-central and southeastern Pennsylvania — regions that also have seen robust increases in population.

“The top agricultural counties in Pennsylvania have experienced major population growth pressures, which could be problematic for them in the long run,” Kelsey said. “Strong population growth and land development can create challenges for agriculture by making farmland less affordable, raising property taxes, causing higher traffic that affects access to farm fields, and increasing potential conflicts between producers and their nonfarm neighbors.”

The largest proportion of Pennsylvania farmland in 2017 was dedicated to crop production, which accounted for 64% of the state’s total ag land. With a 2% increase in acres, cropland was the only category of farmland to expand between 2012 and 2017, the report revealed.

Woodland acreage, which includes natural or planted woodlot that might be used for wood products or timber, accounted for 20% of farmland; pastureland used for animal grazing was 10% of the total; and “other land” — which includes houses, barns, roads, ponds, wasteland or other infrastructure — represented 6% of ag land. Total acres devoted to woodland, pastureland and “other” ag land fell by 18%, 13% and 20%, respectively, from 2012 to 2017.

“Most counties’ agricultural land-use patterns were similar to the statewide pattern,” said report co-author Emily Ciganik, undergraduate research associate in the Center for Economic and Community Development. “The main exception was Pike County in northeastern Pennsylvania, which had nearly 86% of its farmland categorized as woodland.”

To enhance understanding of how agriculture varies across the state, the report describes three USDA-designated land-resource regions, which transcend state borders and are based on climate, soil types and geographic factors that may influence where different types and sizes of farms occur.

Parts of northeastern and northwestern Pennsylvania fall into the Northeastern Forage and Forest Region, which is made up largely of forested plateaus, plains and mountains. A wide swath of Pennsylvania from the southwestern corner to the northcentral counties bordering New York belongs to the East and Central Farming and Forest Region, which is characterized by rolling hills and valleys. Much of this region is located in the Allegheny Plateau.

Ciganik explained that the southeastern quadrant of the state is part of the Northern Atlantic Slope Diversified Farming Region — often called the “ridge-and-valley” region — which also consists of coastal lowlands and plains and contains nearly half of the state’s farmland.

“Because of this region’s rich soil and favorable climate, 73% of its farmland is devoted to crops,” she said. “Hay, corn and soybeans commonly are grown here as feed for beef and dairy cattle, and fruit crops such as apples and peaches also account for significant production.”

This and other reports in the “Understanding Pennsylvania Agriculture, 2017 Update” series can be found on the Center for Economic and Community Development website. Penn State Extension and the U.S. Department of Agriculture’s National Institute of Food and Agriculture supported this work.