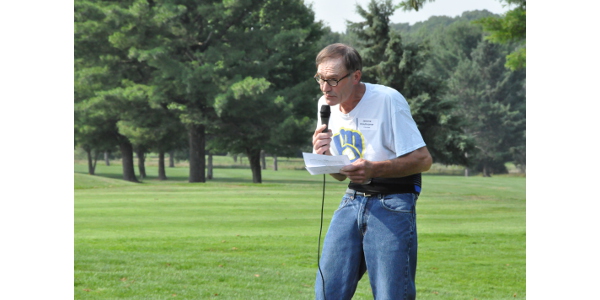 MADISON — Jerome Krautkramer had just graduated from high school a few months prior to a car accident that would leave his body with limitations for the rest of his life. On a foggy August morning, Jerome and some friends were headed to Wausau to finish the last day of their summer job. Visibility was tough that morning and in an instant, Jerome’s life was forever changed. A gravel truck was traveling down the same road and happened to turn directly in front of their oncoming car. Unable to stop, the two vehicles collided. Jerome was pinned in the car but luckily was able to free himself and crawl out of the car just before a second gravel truck slammed into the rear-end of their vehicle. Jerome was severely injured and rushed to the hospital where they discovered that his right hip had been smashed into his back, rupturing his spleen and damaging his kidneys. He also sustained injuries to his shoulders and hands and nearly lost the use of his right arm due to lacerations on his elbow. He would lay flat on his back in this position for two solid months before being released to in-home care, all the while hoping for a full recovery.

Jerome eventually moved on to obtain his diploma and worked as a print press operator for nearly 11 years – a job that requires hours of standing and heavy lifting. All the while he continued to fight through the pain of those life-altering injuries he sustained so many years before.

While working for a local newspaper, Jerome finally realized his heart’s true desire was to be outdoors, working on the land and with the animals. His brother approached him with an idea to start a farm and soon thereafter, they purchased the family farm they were raised on. Knowing the dedication it would take from each of them to make this a successful venture they started Krautkramer Brothers Dairy Farm.

After years of hard work on the dairy farm, at 61 years old, Jerome wasn’t quite sure he’d be able to keep working at his usual pace for much longer. Friends and family started noticing and pointed out how poor his posture had become. This was directly a result of the accident and the physically demanding labor of working on the dairy farm. But Jerome also knew he had to continue working until at least 65 years old to receive full retirement benefits. He couldn’t keep putting off the inevitable; he needed help.

That’s when fate stepped in one day while he was visiting with a local farm equipment implement dealer. The dealer mentioned Easter Seals Wisconsin’s FARM Program and soon thereafter, Jerome was meeting with Rural Rehabilitation Specialist, Jeff Kratochwill, at his farm. On a bitterly cold January morning in 2015, Jeff assessed Jerome’s 500-acre farm, along with the dairy operation that consisted of 140 cows – shipping 8,000 pounds of milk every day. It was easy for Jeff to see the struggles Jerome had been facing every day for over 40 years.

After working with the FARM Program to obtain the appropriate accommodations to continue running his farm, Jerome is now happy to report that he turns 66 in just a few short months. He will be able to receive his full retirement benefits. And he gives all his thanks to Easter Seals Wisconsin for helping him reach his goal. “Easter Seals worked for me. I think it’s a great program that can help a lot of people [with disabilities].”