Home / California / Farming was pathway to education for honors graduate 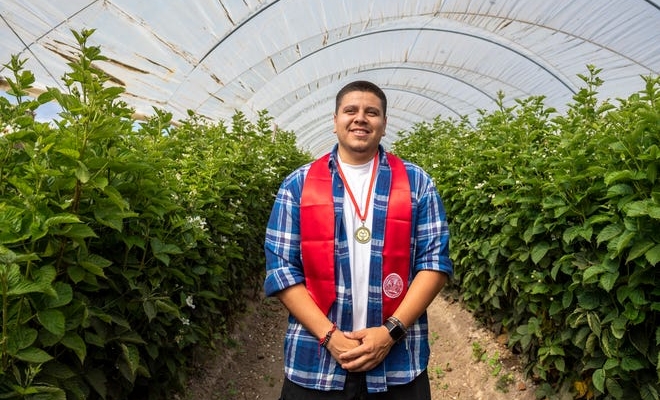 This became his gateway to higher education.

The 22-year-old Salinas native graduated at the top of his class at California State University, Chico. He received his degree in agricultural business.

“Agriculture saved my education,” Barba said. “It provided me with a path to follow.”

Barba said that graduating at the top of his class and getting a college degree was once a distant dream.

“It means a lot to me,” he said. “I didn’t plan to attend college because I was lost on what I wanted to do, but then the idea was implemented in me when I was part of the agricultural program during my junior year. To be part of the top 1% of the entire graduating class is just an amazing accomplishment and feeling.”

In high school, Barba often got kicked out of class because of his inability to stay focused. When he joined the more hands-on FFA program at his counselor’s suggestion, Barba went from a struggling student to a thriving one.

Barba graduated from Everett Alvarez High School in May 2017, with a 3.5 GPA. He was part of The National FFA Organization and Agricultural Program at his school.

“This program was amazing to me because it put me to work,” Barba said. “I was able to learn about an industry surrounding our area and was able to participate in it. While being part of the FFA program I was able to raise sheep and pigs.”

He was also given the agriculture award of “Most Likely to Succeed in Agriculture,” as a senior in high school.

“Having a degree in agricultural business means that I have opened new opportunities that my parents would never have had the chance to undertake,” he said. “By being top of my class as well as having this degree means I am able to do things others might not be able to do. Graduating with these honors is just a demonstration that I am able to do anything I set my mind to.”

Data from Pew Research reveals that in 2017 when Barba graduated high school, only 16% of all Hispanics in the U.S., 25 and older, had a bachelor’s degree or more. At that time, the rate for all Americans was double that of Hispanics at 32%.

Barba is the middle child and has two sisters — Lumi Diane Barba, 25, and a younger sister who attends Everett Alvarez High School, his alma mater. He said it was important he earned his college degree not just for him but for his parents.

“Their goal has always been to give their kids a better future,” Barba said. “They have always supported us in what we do and are always there.”

Barba’s parents both worked in the fields and have always believed in the power of a good education. The parents said they’ve instilled those same values in their children.

“For me as a father, it was very important that they continue their education so that they can forge a better future and not have to fight as we have struggled,” said Jose De Jesus Barba, Barba’s father.

Barba’s parents are from Jalisco, Mexico, and could not attend school past sixth grade because they had to work to help support their families.

‘Better than I was yesterday’

In July, Barba will enter the workforce as a production lead for E&J Gallo winery. The winery is headquartered in Modesto, Calif., and is the largest exporter of California wines.

He would eventually like to start his own ag business and attend graduate school to obtain a master’s in business. When times get tough, Barba said he can always look back on his degree and know he’s capable of overcoming any challenge.

“This degree means I am better than I was yesterday,” he added.

For students unsure what the future holds, Barba had some advice.

“I suggest to hold on to that thing that you love and follow it because it will introduce you to new opportunities and experiences,” he said. “I also advise those students to give things a try. It is better to experience things and see if you like them or not than to not try them at all. Take chances because you never know what will come out of it.”

Proposals sought for Ag in the Classroom programs
July 20, 2021