Home » Farming, and UF/IFAS, runs in the family 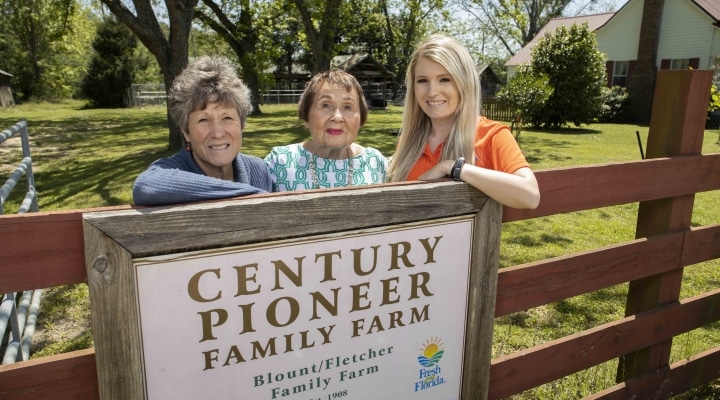 Ann Blount calls herself a “weekend farmer.” The Blount family’s 300-acre farm in Gadsden County can trace its roots back to 1908, evolving from shade tobacco to sweet potato fields, and eventually to its current timber, cattle and hay operation. (photo by UF/IFAS)

GAINESVILLE, Fla. — Ann Blount calls herself a “weekend farmer.” The Blount family’s 300-acre farm in Gadsden County can trace its roots back to 1908, evolving from shade tobacco to sweet potato fields, and eventually to its current timber, cattle and hay operation.

While some “part-time-retired” local farmers handle much of the farm’s day-to-day operations, Ann’s day job is in another field – at least physically speaking. She’s spent the past 30-odd years researching forage breeding and genetics at the University of Florida’s nearest research facility in Quincy.

Her role at the UF/IFAS North Florida Research and Education Center (NFREC) also includes Extension work, helping cattle ranchers throughout the state determine the best ways to nourish their herds and protect them from consuming toxic weeds. In 2018, she was honored by the Florida Department of Agriculture and Consumer Services as its Woman of the Year in Agriculture.

Her work life and home life often blend together, especially since her daughter, Evie, started her career with UF/IFAS as the 4-H Extension agent in Gadsden County in January 2020. The two women, along with Ann’s 93-year-old mother, Harriet, live at the family farm and have shared its management decisions for the better part of the last two decades.

Farming since childhood
Ann’s family owned a vegetable and tropical fruit farm in the Virgin Islands. She finished high school early, and at age 17, started pursuing a bachelor’s degree from Texas A&M University. It was there that Ann gained the first foothold in the career that would shape her life’s work.

“I got a job working for a plant breeder at TAMU, and I’ve never done anything but that,” Ann said. “I think the jobs you take early on help define your career path.”

At that point, she envisioned eventually returning to the Virgin Islands to apply her agronomy expertise there and help feed the place she called home. But first, she set her sights on obtaining more advanced degrees, which took her to the University of Florida campus in Gainesville. After earning a master’s degree in plant ecology and a Ph.D. in plant breeding and genetics, she took on a faculty position at the NFREC.

The rest, of course, is history. Although her route back to the Virgin Islands never happened full-time, she has returned over the years and has been able to develop forages for that part of the world.

Following in Mom’s footsteps
“I really thought she’d do something totally different,” Ann said of her daughter’s unfolding career path. “She’s much more creative and outgoing. I thought she would do something like agricultural marketing.”

Much like her mom, Evie’s life has always centered around agriculture. She grew up with chores to do on the family farm, eventually taking on more responsibilities as she grew older and after her dad died when she was 12 years old.

Although Evie took some ag business classes while attending Abraham Baldwin Agricultural College in Tifton, Georgia, and “really enjoyed them,” her roots were fixed. She even worked jobs in horticulture and agronomy before obtaining her bachelor’s degree in crop and soil science.

One of those jobs, an internship at the Georgia Department of Agriculture’s seed lab in Tifton, turned into a full-time position as a seed geneticist after she graduated. (“Must be genetic!” Ann jokes.)

Once a 4-Her…
Fast forward a few years, and Evie learns the former UF/IFAS Extension Gadsden County 4-H agent is set to retire. Ironically, this is the same program in which Evie had once been a member, from ages 8 to 18.

“When I started 4-H, she was the agent. I had known her practically my whole life,” Evie said. “I decided to apply and just thought, ‘If it’s meant to be, it will be.’”

When Evie considers her upbringing, often traveling with her mom to different farms for Extension work, it certainly seems that it was.

“I’ve been around Extension since I was little. Sometimes in meetings they’ll joke that I was born in Extension,” Evie said.

Evie would regularly accompany her mother to clients’ farms and became quite skilled at tasks like weed identification. Ann also occasionally brought her along to forage breeding conferences, where she would often sit in and learn from the sessions.

“Evie was always involved, and wanted to be,” Ann said. “Even now, if I’m heading to a producer’s field and need an extra pair of discerning eyes, she’ll go with me. She’s always taken an interest.”

The other full-time job
When it comes to life at home, Ann and Evie have made managing the farm a 50-50 partnership – well, with input from Grandma, too, Evie notes. They are always sure to run any ideas past one another, especially since they all approach problems from different viewpoints.

“When we make decisions for the farm, I’m looking at sheer cost and practicality,” Ann said. “Evie looks at the beauty of something that I sometimes wonder if it’s worth the investment. My mother keeps us both grounded with a common-sense perspective.”

Evie adds: “Sometimes there’s some compromise, but we all handle it well.”

Ann offers an example of Evie’s dreams for the farm: an event venue. For the past several years, excepting the last two due to the COVID-19 pandemic, the farm has hosted a “Spring Fling” for the NFREC faculty, staff and their families. The visitors are treated to an Easter egg hunt, a bonfire and beef sourced right from the farm. Ann and Evie say they’re hopeful for a revived event in 2022, if not sooner.

Reflecting on the past, and looking forward
The pandemic, of course, swept in all manner of change to daily life. Virtual interaction became a new normal, and Extension services were no exception.

And, as Ann points out, “it certainly made for a strange start to Evie’s Extension career.” Evie’s first day was just a few short weeks before the landscape changed under COVID-19 restrictions.

“There was a lot of change, but I feel fortunate to have had the opportunity to take on leadership roles that I wouldn’t have otherwise been able to do,” Evie said. “One of my big accomplishments was working with Chris DeCubellis (a Florida 4-H statewide specialized agent) to create the Florida 4-H Virtual Agricultural Judging Contest. We had kids from all over the state compete, and they all really enjoyed it. Now we’re making it an annual virtual contest.”

To add to her already busy schedule, Evie has also begun a master’s program at UF, pursuing her next degree in agricultural communication and education.

But as Evie begins her career with UF/IFAS, Ann says hers is nearing the end. She has not set a retirement date yet, but she says it will be in the next few years.

Ann, however, does not paint a picture of kicking her feet up in retirement. She hopes to remain active with UF/IFAS while also traveling to countries where she’s worked over the years and still maintains several forage breeding projects.

The first thing on her mind, though, is at home: “I’d like to spend a little more time on the family farm, not just on the weekends.”