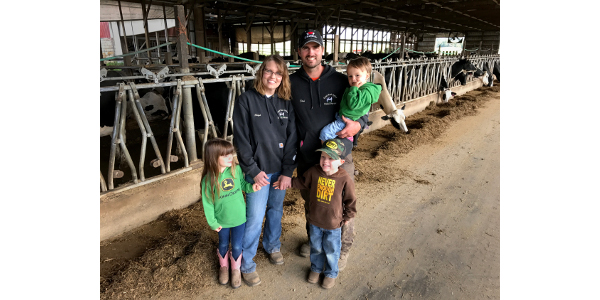 Raising children on a farm might sound idyllic, but in a national study, most farmers with children under 18 said childcare was a challenge. Over two-thirds of first-generation farmers, people who had not grown up on farms, reported struggles with childcare. (Courtesy of Minnesota Department of Agriculture)

COLUMBUS, Ohio — Raising children on a farm might sound idyllic, but in a national study, most farmers with children under 18 said childcare was a challenge.

Over two-thirds of first-generation farmers, people who had not grown up on farms, reported struggles with childcare, from finding affordable options nearby to finding providers whose childrearing philosophy matched theirs.

Even multigenerational farmers, many who live near relatives, said childcare’s affordability, availability, or quality was a problem. Just over half of those farmers reported some type of childcare challenge.

“This is going to come as a surprise to a lot of people who don’t think childcare is an issue for farmers,” said Shoshanah Inwood, an assistant professor at The Ohio State University College of Food, Agricultural, and Environmental Sciences (CFAES) and the lead researcher of the study.

Of the 654 people who responded to a written survey, 186 had children under 18 years old.

Although the surveys were taken in metropolitan areas with likely more childcare options than in rural areas, childcare still was a major challenge.

Beginning farmers often make land-purchasing decisions based on cost and proximity to markets, Inwood said. But when those decisions take them far away from relatives, that can affect the well-being of their family and productivity of their farm.

“Oftentimes there’s this romantic idea of what it is to grow up on a farm, but what people are realizing is, ‘We can’t just let the kids run around all day unsupervised,’” she said.

“There’s machinery and it’s dangerous, and it isn’t cute when you find out your child followed you down the row, plucking out the onions you just planted.”

With farming being a seven-day-a-week job lasting much longer than eight hours a day, finding a childcare provider to meet that schedule can be especially difficult.

While there’s an emphasis on attracting more young people into farming, they are farmers in their prime child-bearing years, Inwood said. As a result, there needs to be some help for them in planning for how they’re going to take care of their children if they decide to become parents, she said.

Farmer education is focused on helping farmers set their business goals, identifying markets, and working out the financials, Inwood said. “Nobody is talking about childcare.”

What’s left out of much of the training for farmers is a discussion about how they’re going to work out childcare if and when they decide to become parents, Inwood said.

Farmers’ ability to find childcare affected their production and marketing decisions in wide-ranging and surprising ways, the researchers found.

“There are tradeoffs farm families make as they need to decide how much money and time to spend on childcare versus time and money they spend investing in growing and building their enterprise,” Inwood said.

One of the farmers interviewed lost a significant amount of income when she had to stop selling at a farmers market because she couldn’t meet the manager’s requirement that sellers arrive an hour before opening. She couldn’t get a babysitter that early.

On another farm, the wife planted crops in fields nearest their home to be as close as possible to their children, while still working. Without a babysitter, she had to prioritize being close to home over other critical factors determining a crop’s success such as the type of soil or slope of the land.

The majority of farmers interviewed said they could not scale up their farm businesses because they were limited by childcare responsibilities.

“Our interviews with young farmer-parents clearly showed that even though childcare seems like an issue confined to the farm household, it has real impacts on farm businesses as well,” Rissing said.

“So much of a farm’s success and the quality of life of the farmers is tied to these dynamics, like having family nearby and a strong support network.”

Even farmers with relatives nearby couldn’t always count on their relatives to watch their children. Sometimes those relatives had jobs and other responsibilities or health issues that prevented them from being able to babysit or chauffeur kids to activities.

When the reality of raising children on a farm doesn’t meet what people had imagined it would be, parents’ stress can be infectious, Inwood said.

“And then what kind of example are they setting for kids about what it’s like to grow up on a farm?”

May USDA forecast remains stable for Florida orange production
May 13, 2021

USDA to provide nutrition assistance to 30M+ kids over the summer
April 26, 2021