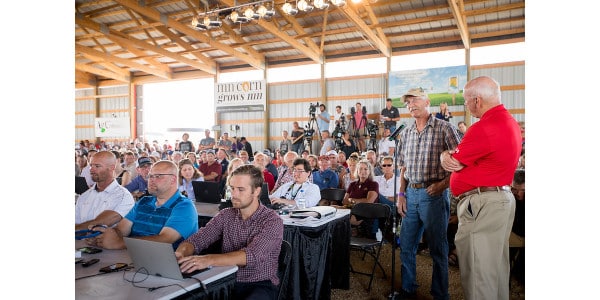 “This is a very intriguing line-up of Candidate Forums, and the Forums are quite timely, considering Minnesota’s statewide primary and special elections in the First Congressional District are being held the following week,” according to Kent Thiesse, Farmfest forum coordinator.

The forums will be held August 2, 3, and 4, in the Wick Buildings Farmfest Center, which is near the center of the show site. Farmfest is located at the Gilfillan Estate, 7 miles southeast of Redwood Falls, Minnesota, on U.S. Highway 67.

The “Minnesota Governor Candidate’s Forum” is being held on Wednesday, Aug. 3, at 10:30 a.m., and will feature the two major candidates in Minnesota’s gubernatorial race. Confirmed candidates are incumbent Governor Tim Walz, the DFL-endorsed candidate, and Dr. Scott Jensen, the Republican-endorsed candidate. The Forum will be broadcast live on WCCO radio, and the Forum will be moderated by the station’s analyst, Blois Olson. The questions will be asked by rural leaders and will focus on variety of issues affecting the agriculture industry and greater Minnesota.

Farmfest will host a special “First District Congressional Candidate Forum” for candidates from Minnesota’s First Congressional District. The Forum is scheduled for Tuesday, Aug. 2, at 9:30 a.m., and will feature Republican Brad Finstad and DFL-candidate Jeff Ettinger. Both are vying for an open seat in the First Congressional District in a special election on Aug. 9, which was created by the death of Congressman Jim Hagedorn earlier this year. A panel of agriculture leaders will pose questions to the candidates on a variety of issues affecting farmers and rural families.

The “Women in Ag Event” takes place on Thursday morning, Aug. 4, at 10:45 a.m., and will feature keynote speaker, Michelle Miller, The Farm Babe. Her keynote address will help attendees bridge the gap between farmers and consumers and asks, “how can we as farmers and ranchers better tell the story of agriculture?” She will share her journey to social media stardom and inspire others to step up to the plate, fight misinformed activists, and proudly communicate tough topics and all the success that is modern farming. At the conclusion of the panel, the five finalists for the 2022 Farmfest Woman Farmer of the Year Award will be introduced, concluding with the announcement of this year’s winner.

A Farmfest tradition will continue with the annual “Farm Family of the Year” Recognition Program on Thursday, Aug. 4, at 1:15 p.m. Approximately 80 farm families from each county throughout Minnesota have been selected at the county level for this special recognition. This event is jointly sponsored by the University of Minnesota and Farmfest.

The Linder Farm Network Noon Show will be held each day at Farmfest from 12:00-1:00 p.m., featuring many special guests each day. Other educational sessions include “Market Disruptors in 2022” on Tuesday, Aug. 2, at 8:30 a.m., sponsored by CHS Hedging; “Changing Hands: Practical Tips in Farm Estate and Succession Planning” on Tuesday, Aug. 2 at 2:45 p.m., sponsored by Farm Bureau Financial Services, and “Farm Transition Planning: Where to Start and How to Keep Momentum Going” on Wednesday, Aug. 3 at 2:45 p.m., sponsored by Ag Country Farm credit Services. The University of Minnesota will also host a “Manure Applicator Certification Program” on Thursday, Aug. 4, beginning at 8:00 a.m.

For more details on the Farmfest candidate forums and other presentations, please contact Kent Thiesse, Farmfest Forum Coordinator at (507-381-7960) or kent.thiesse@minnstarbank.com. For more information on the companies exhibiting, the full schedule of events, and other details at Farmfest, please refer to the IDEAg Farmfest website at: www.farmfest.com or contact Niki Jones, Director, Event Marketing at (816-863-3974) or niki.jones@ideaggroup.com