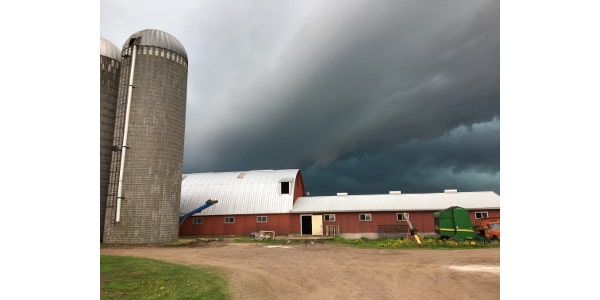 Storm clouds brew over a farm in Chippewa County. (Photo by Danielle Endvick)

CHIPPEWA FALLS, Wis. — While we still have much to learn, and far more to do, about climate change, it’s impact on natural resources and communities is becoming increasingly clear. Lake Superior, the largest single source of fresh water on the planet, seemed immune to algal blooms that trouble the more small and shallow Lake Eerie, as well as smaller bodies of water throughout Wisconsin. Superior was believed too vast to allow for the concentration of nutrients needed to fuel a bloom and too cold for the algae to multiply. Only a few surface blooms of cyanobacteria, occurring in the 1960s and linked to acute releases of mining byproducts into Superior, have been recorded through modern history. Unfortunately, the deepest of the Great Lakes started experiencing these blooms since 2012, with one bloom stretching about 50 miles along the shoreline in 2018.

The lake is getting warmer. Meanwhile, escalating average temperatures allow the atmosphere to hold more moisture, which results in more frequent and intense downpours. The increasing frequency and intensity of these storm events flush nutrients from overwhelmed municipal wastewater treatment plants and farm fields alike into vulnerable surface waters. Trout streams and wild rice beds in Superior’s watershed that have provided reliable sustenance to Native American communities in Minnesota, Michigan and Wisconsin through time immemorial are threatened by the increasing temperatures and potential for blooms, demonstrating that today’s conditions are new to Lake Superior.

While changes in Lake Superior and other water bodies throughout Wisconsin are uniquely visible, climate change’s impacts can be observed across Wisconsin’s farming landscape. More intense spring rains and the resulting mud are keeping folks out of the field. Bill Hogseth, Wisconsin Farmers Union’s Watershed and Organizing Coordinator, discusses climate change with farmers through Governor Tony Ever’s Climate Change Task Force. “Strongest on the mind of farmers I’m working with is that last year was the wettest on record,” Hogseth said. “The fact that Wisconsin farmers are three weeks ahead of where they were this time last year reminds many farmers how crazy this is. In the Driftless Area, flooding has become expected over the past several years.”

Rachel Bouressa, a Wisconsin Farmers Union member raising cows on grass from start to finish in New London, is also witnessing how the changing climate impacts farmers in her community. Rachel serves on the Farm Service Agency County Committee, where she participates in the execution of emergency farm support programs. “Lately it’s been so wet that we’ve had to use emergency programs like prevented planting because so much land has gone unplanted, totally fallow and unproductive,” she said. The window for completing harvest, Bouressa noted, has also narrowed as weather in the fall has become more erratic.

This is in stark contrast to the experience of Bouressa’s parents, who manage a more conventional operation in Australia. While Wisconsin experiences more intense rain, the community where Bouressa’s parents farm went nine months with no rainfall leading into the wildfires in late 2019 and early 2020. Their farm ultimately wasn’t damaged by the fires, but the surrounding community was decimated.

The added risk from all the extreme weather facing farmers across the globe, both drought and deluge, track with a July 2019 report issued by the USDA Economic Research Service, Climate Change and Agricultural Risk Management Into the 21st Century, that modeled farmers’ likely utilization of the Federal Crop Insurance Program and determined that agricultural risk management programs are likely to become more expensive to manage as the climate continues to change.

Farmers place themselves in peril by ignoring the mounting evidence and need for action on climate change. The higher the cost of the farmers’ safety net, the more difficult these programs become to justify to taxpayers. Fortunately, there is growing interest in supporting farmers to manage their operations in ways that reduce their own risk in a changing climate while also reducing the emissions of greenhouse gases that exacerbate climate challenges. Rachel explains “soil health principles using practices like no-till and cover crops allowed a lot of farmers to get into the field earlier.” And while witnessing neighbors struggle with mud, Bouressa said that the soil health practices she employs, like interseeding with legumes instead of chemical fertilizer and maintaining pasture for over twenty years, allow her ground to absorb more water and hold it against future dry spells while remaining traversable. Further, her grazing regime avoids the need for many passes with heavy equipment that may be prone to damaging or getting stuck in wet ground. Bouressa also points out that grazing is generally far less fossil fuel intensive than growing crops for feed with a lot of chemical input.

Making the changes to more resilient farming is a big lift for any farm operation, but the investment in the stability of the food supply is worth it. Farmers can make several asks of government officials to help clear the way for climate resilient farming, including investing in diverse agriculture research, support for farm bill conservation programs, and reducing barriers to market for animals on pasture.

Hogseth’s work with the Climate Change Task Force also involves identifying policy solutions to encourage climate-resilient farming. Farmers on the task force have indicated interest in carbon credit programs that reward farmers for avoiding emissions and storing atmospheric carbon dioxide in their working soils, incentivizing renewable energy on the farm, and encouraging grazing and reforestation. WFU is currently working with farmer members to prepare formal testimony on both challenges to farming and potential policy improvements, for upcoming public hearings on climate solutions.

Climate change presents serious challenges to farmers, rural communities, and the stability of domestic and global food systems. Despite overwhelming scientific consensus that the phenomena is occurring, and that human activity is contributing to its severity, the issue has become politicized and often painfully difficult to discuss. There are plenty of options for empowering farmers to adapt to and mitigate climate change, but denying the challenge prevents us from coordinating efforts and maximizing results from farming practices with climate benefits. Hopefully, developments like algal blooms in Lake Superior and USDA’s predictions on the rising expense of crop insurance programs will provide the motivation needed to address climate change in farming communities.

Thomas Driscoll is helping to elevate key rural issues through Wisconsin Farmers Union’s Rural Voices project. He also is a consultant, advising farmers and communities on collaborating with consumers to realize more societal benefits from agriculture. You can learn more about his work here and about the Rural Voices project at wisconsinfarmersunion.com/ruralvoices.

Legal dispute over logging in state forest back in court
September 21, 2020