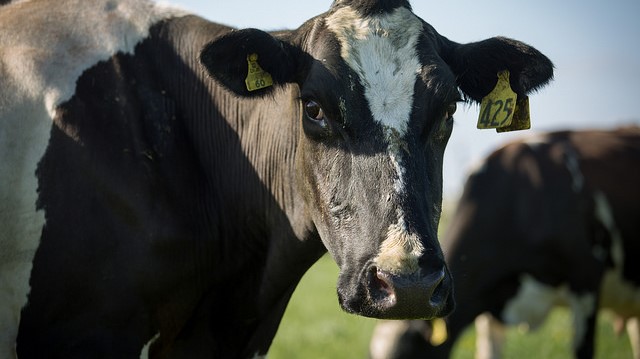 In their letter to President Trump, more than 60 companies asked the administration to work collaboratively with Mexico and suspend the steel and aluminum tariffs on Mexican products until the negotiations for a modernized NAFTA have been concluded. (Farm Watch, Flickr/Creative Commons)

WASHINGTON — More than 60 companies and organizations representing American dairy farmers and cheese makers commended President Donald Trump today for his efforts on equitable trade and for insisting that Canada halt its market-distorting dairy practices. At the same time, the companies urged the administration to reconsider its imposition of new tariffs on Mexico in light of that country’s constructive engagement in North American Free Trade Agreement (NAFTA) negotiations and the harm that Mexico’s retaliatory tariffs will have on U.S. dairy’s trade with its largest and most reliable market.

In retaliation for U.S. actions on steel and aluminum imports, Mexico recently added new tariffs – some of which will reach as high as 25 percent next month – on American-made cheeses, among other products. These tariffs will certainly diminish demand for high-quality dairy products that are produced across the United States. The production of cheese and other dairy products in the U.S. supports nearly 3 million American jobs. The additional Mexican duties also will allow the European Union, which recently signed a bilateral free trade agreement with Mexico, to take hard-earned market share from American dairy companies.

In their letter to President Trump, the companies asked the administration to work collaboratively with Mexico and suspend the steel and aluminum tariffs on Mexican products until the negotiations for a modernized NAFTA have been concluded.

“Our industry recognizes that the U.S. must be resolute in ensuring our trading partners uphold their end of the bargain with us,” they said. “We trust that your administration’s skilled staff can find a way to resolve this issue, given Mexico’s strong commitment to working with the U.S. to further improve U.S.-Mexican trade.”

Mexico has been a model for open dairy trade with the United States. Through investment and cooperation, the United States has become Mexico’s biggest dairy supplier, with cheese purchases last year totaling nearly $400 million. Today, Mexico accounts for about one-quarter of all U.S. dairy exports. Until the tariffs were imposed, all U.S. dairy products enjoyed duty-free access into the Mexican market.

“Our first four months of 2018 showed a strong expansion in the volume of U.S. dairy exports into Mexico,” said Tom Vilsack, president and CEO of USDEC. “But these tariffs have introduced uncertainty and concern. A renegotiated NAFTA 2.0 would go a long way toward restoring our industry’s momentum.”

“Maintaining dairy market access in Mexico is IDFA’s number one priority in the NAFTA modernization efforts, specifically because the duty-free access has allowed trade between our countries to flourish and Mexico to become our number 1 export market,” said Michael Dykes, D.V.M., president and CEO of IDFA. “We’re confident that the administration and U.S. negotiators will find a way to preserve this vital partnership, which allows the U.S. dairy industry to create more jobs and drive our economy.”

“After rising during the spring, dairy futures markets and the farm-level milk price outlook for the rest of 2018 have deteriorated significantly in recent weeks, in reaction to the prospects of lost dairy export sales,” said Jim Mulhern, president and CEO of NMPF. “No one wants to see lasting damage to our farmers result from lost access to our top foreign market. That’s why resumption of tariff-free trade between the U.S. and Mexico is so critical.”