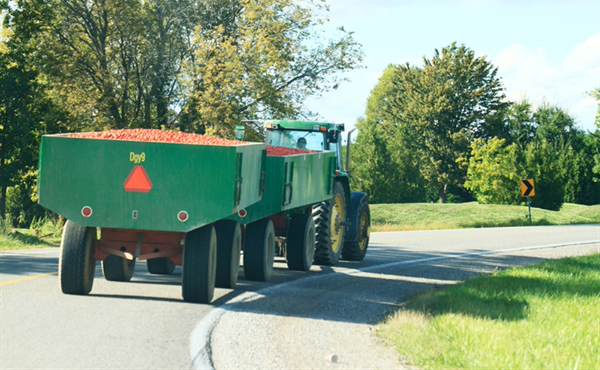 When drivers encounter a tractor pulling equipment or a combine on the road, they should wait for the equipment to pull off the road or watch for a clear line of sight to pass. (Virginia Farm Bureau Federation)

LOVETTSVILLE, Va. — Farmers want motorists to exercise caution when they see them driving farm equipment on back roads and busy highways.

“Highway accidents involving farm equipment are something we’re seeing a lot of recently,” said Dana Fisher, chairman of Virginia Farm Bureau Federation’s safety subcommittee. “Between more farmers having land divided up and away from their main home or farm, and machinery being larger, it creates a challenge for motorists and farmers.

“This is especially true in high-traffic areas where there are more people following a GPS who may be unfamiliar with the area, or using back roads as cut-throughs. They may not be familiar with rural roadways and farm equipment,” he said.

During hay-cutting season, Loudoun County Farm Bureau President Chris Van Vlack frequently drives farm vehicles on rural roadways. And in areas like Loudoun, the roads are small and rural, yet traffic volume is higher than in many other areas of the state.

“We have more miles of gravel roads than any other county, and many of those gravel roads are one-lane. But we also have a population of more than 400,000,” said Van Vlack, who also grows grain. “I store all my equipment at home, but most of the land I farm is spread out over an area within about five miles of my house.”

When he needs to work in a crop or hay field, he must drive equipment on the road. “As farms become smaller and more split up, others in the community are spreading their operations farther from their home farms, which requires them to move more equipment on roadways,” he said.

When Van Vlack drives equipment on roads with a higher speed limit, he pulls over as frequently as possible if it is safe to do so. “Chances are we (farmers) know you’re back there, and we’re looking for a safe way to let you pass, but if we don’t see you, and you come up beside us or cross in front of us, that’s when tragedies can happen.”

He said his closest calls have been when he is slowing down to turn into a field. “I’ll start to turn, but the vehicle behind me will at the same time try to pull out and pass me.”

When drivers encounter a tractor pulling equipment or a combine on the road, they should wait for the equipment to pull off the road or watch for a clear line of sight to pass.

“We all have a legal right to be on the road — pedestrians, cyclists, myself on farm equipment and motorists. We all likewise want to arrive home safely, so it’s on all of us to take the extra time and use a little bit of extra caution to look out for the other guy,” Van Vlack said.

Pesticide may be behind Md. bald eagle deaths