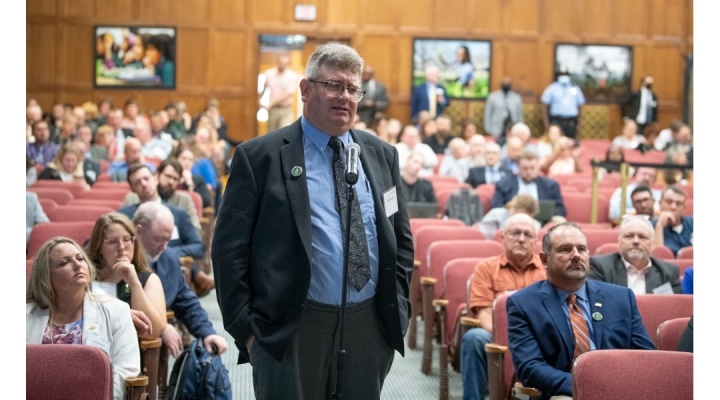 Last week, more than 250 Farmers Union members from across the country arrived in Washington, D.C., for the 2022 Fall Legislative Fly-In to advocate for family farmers. Members are pictured here during an address by Agriculture Secretary Tom Vilsack at the Jefferson Auditorium, U.S. Department of Agriculture on Sept. 12. (Tom Witham, USDA)

“This has been an incredibly productive and successful fly-in for Farmers Union. It’s a testament to the passion and interest of our members that they’re willing to take time away from the farm and come to Washington and build bipartisan support for Fairness for Farmers and their farm bill priorities,” said NFU President Rob Larew.

In his introductory remarks to Farmers Union members, Secretary of Agriculture Tom Vilsack said, “In many respects, National Farmers Union has been the architect and the designer of the work we are doing in this administration in terms of farm country and in terms of agriculture.”

“Competition in agriculture is critical. Too often, farmers and livestock producers have too few suppliers to buy from and too few buyers to sell to. Farmers and their families work incredibly hard and deserve to see the fruits of their labor and the American dream,” said Assistant Attorney General Jonathan Kanter of the Justice Department’s Antitrust Division in a Department of Justice press release. “[…] Protecting competition and the rule of law in agricultural markets is core to the work of the Antitrust Division, and we will vigorously enforce the antitrust laws in this area.”