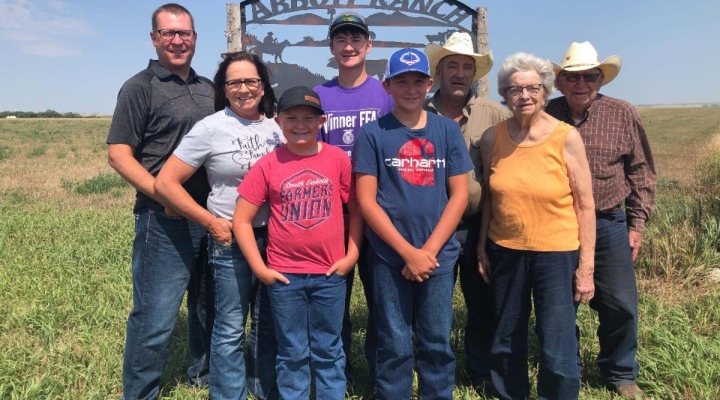 South Dakota Farmers Union has served South Dakota farm and ranch families for more than a century. Throughout the year, we share their stories in order to highlight the families who make up our state’s No. 1 industry and help feed the world. This month we highlight the Abbott family of Hidden Timber. Left to right: Chad and Kodi Blotsky; Chord, 10; Chaz, 17 (SDFU 2022 JAC) and Chase Blotsky, 14; Bryan Abbott, Kay and Bill Abbott. (Courtesy Photo)

HURON, S.D. — Rancher Bill Abbott was just a kid when a neighbor hired him and his sister to ride pastures checking cattle and water tanks.

“He was a big operator and most of his hired men were drafted into World War II, so he was hard up for riders to check pastures. You talk to all guys my age, who were kids when World War II was on, and we all started working early because all the young men and women left for the war,” explained Bill, who at 89 is still actively involved in ranch work. Only, today, he works with his son, Bryan, and daughter, Kodi Blotsky, on the Todd County ranch where he and his wife, Kay, raised their six children: Kasey, Tracy, Bryan, Cleo (deceased), Lisa and Kodi.

Bill is the third generation to raise cattle near Hidden Timber, S.D. – a small ranching community 42 miles west of Winner. He said he realized this was where he wanted to make his life after he spent time away serving in the Army during the Korean War.

“I made a good soldier, but I didn’t like the Army. I had a lot of chances to stay in the Army, but I just said, ‘I don’t want any part of it.’”

Bill met Kay a few years after returning home to ranch with his dad, and namesake, William “Willy” Abbott. Kay grew up on a ranch a little more than three hours away, near Elm Springs.

Her parents, Milton “Slim” and Hallie Cordes, were good friends of Bill’s parents, Willy and Inez. When Bill returned to the ranch after the war, the couple visited, and Slim invited Bill to hunt on his Cheyenne River ranch.

“He made a comment about having plenty of deer and five daughters,” Bill recalled.

When the couple married, Kay’s dad and mom gave them 15 heifer stock cows. And together they grew their family and ranch.

“Kay knew how a ranch should run and she has always done a great job of keeping the family together,” Bill said.

Like his dad, Bryan decided to remain on the family ranch. Along with cattle, Bryan manages all the crop acres. “We feed nearly everything we raise,” Bryan explained.

All together Bill, Bryan and Kodi manage 2,000 acres of native range and cropland. The family owns some land and lease many acres from the Rosebud Tribe. “We would not be able to ranch without my dad’s support,” explains Kodi, Kay and Bill’s youngest.

Kodi decided to make ranching her career after she and her husband, Chad, had their first son, Chaz. At the time, she was teaching high school computer classes in Todd County.

“I wanted my kids to grow up on the ranch,” Kodi said. “My dad always taught us how to work hard and gave us a love for the land and animals.”

The timing was right. Her dad and Bryan had recently lost a hired hand. “I asked Dad if they wouldn’t mind if I stayed home and helped out,” Kodi said.

Chaz, 17, has two younger brothers, Chase, 14, and Chord, 10. Kodi said that she and Chad made the right decision to return to the family’s ranch to raise their sons.

“It is a peaceful place to raise them, but also, my boys learn that it is not always fun. They learn the hardship of raising a calf or goat and even though we try our best to provide them shelter and food, but sometimes it doesn’t work out,” Kodi explained.

Getting through tough times is not foreign to the family. Bill’s grandpa, Frank Abbott, was lured west from Rock Rapids, Iowa, by the Homestead Act but his name was not drawn. After leasing some Tribal land, he bought his own place and built a successful ranch – only to lose everything in the 1920s when the banks failed.

Willy got his start working for a cattle company, the Carr Ranch, and eventually built up a small herd and land of his own.

As Bill and Kay expanded the ranch, Kodi and Bryan said their parents created an environment for their children where they were encouraged to not only work hard, but to embrace their passions.

For Bryan, it was rodeo. “I always enjoyed working around the animals and being out in the country. I used to rodeo and thought that was pretty neat,” said Bryan, who was named 1980 champion bull rider at the State High School Rodeo Finals and he received the same title in 4-H Rodeo three years running. “We used to practice on calves here,” Bryan explained. “Dad built a chute we could buck out of.”

“We would invite my grandparents to watch and have a rodeo night,” Kodi added.

Kodi enjoyed watching her older siblings rodeo, but it wasn’t for her. She found she enjoyed participating in other 4-H activities. She is happy her sons get to continue this tradition.

“Today people are so in tune with technology, but they are not able to communicate. I stress that my boys need to be able to communicate outside of technology and 4-H helps them with this because they all do 4-H demonstrations,” Kodi explained. “Public presentations help them gain confidence in themselves and they are able to stand up in front of people and be proud of themselves and teach others about something that they love.”

Chaz agreed with his mom, saying that in addition to the public speaking skills he’s gained through 4-H, the opportunity to work with his parents, uncle and grandparents on the ranch has helped him develop the skills he needs to succeed in other areas of life.

He added that his grandpa’s advice, to “pay attention,” comes to mind often.

His brother, Chase, is going to enter a wooden sign he designed that features a flag and a cross. “At the fair I enjoy seeing all the things kids make and I also like to help at the petting zoo.”

And Chord is going to enter a horse show. “I have gotten into riding horses and – I am looking forward to that and look forward to the petting zoo,” said Chord, continuing a long-standing family tradition of horsemanship. More than a century ago, his great-grandfather trained horses for the Calvary.

Overall, Chaz said he sees his family’s involvement in the fair as a positive way to promote agriculture.

Agriculture advocacy is a family tradition. Kodi, Grandma Kay and Great-Grandma Hallie have all been actively involved and held leadership roles in the South Dakota Cattlewomen’s Association.

“What I found is involvement really broadens my perspective,” Kodi said. “After being out here on the ranch, doing our own thing, raising cattle the way we do, involvement in Cattlewomen’s forces me to think about where the beef we raise goes and what consumers in California or New York think about the product we raise.”

A few years ago, Kodi, Kay and Bill joined with other South Dakota cattle producers in a South Dakota Cattlewomen’s booth where they provided beef jerky to bikers from across the nation during the Sturgis Rally.

“It was amazing because the majority of everyone we talked with loved beef (I only ran into about six vegetarians),” Kodi said. “I met many who had jobs related to the industry – working as a butcher or truck driver. The experience gave me hope that our nation does not look at agriculture as a negative.”

Prepare for high variability during 2022 harvest