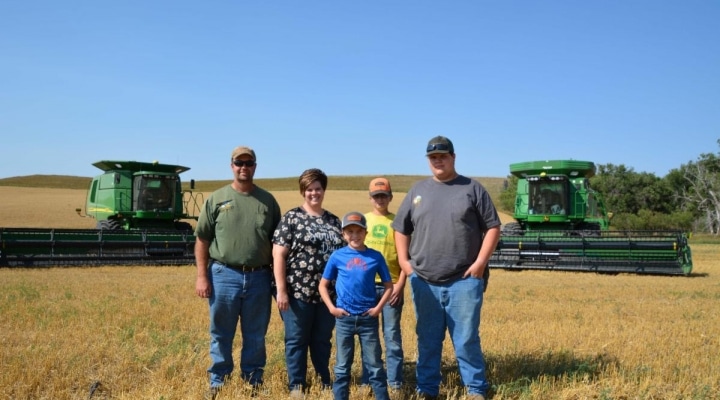 South Dakota Farmers Union has served South Dakota farm and ranch families for more than a century. Throughout the year, we share their stories in order to highlight the families who make up our state’s No. 1 industry and help feed the world. This month we highlight the Melling family, pictured here: Donald, LeiLani and their sons: Kaison, Kolby and Kolson. (Courtesy Photo)

“We started right after spring planting. We’d get stuff ready and head to Johnson, Kan. We went from there to Interior and Wall, S.D.,” Donald Jr. recalls. “When we came home, it was just in time to jump right into the combine and harvest our own fields.”

The last year they custom harvested, Kolson was 5. Now Donald Jr. and LeiLani’s oldest son is 16.

“I didn’t want to go anymore, and my dad was dealing with some health issues,” Donald Jr. explains.

Instead, Donald Jr. decided to focus his time and invest his energy taking care of his and LeiLani’s cattle and managing rangeland and crop acres. In 1994, he accepted an opportunity to farm and ranch on land owned by a family he used to custom harvest for.

“The family was tired of hiring people to farm for them, so they asked us to take over. We own some of our own land, but rent most of it,” Donald Jr. says.

His efforts have not gone unnoticed. April 2021, he received a phone call from a landowner he has leased from for several years. “He said, ‘I know things are tough right now, so how about I draft a new contract and we lower the rent,’” Donald Jr. shares. “I bet our family has farmed this land for at least 50 years.
First my dad and uncle, and now my brother and I. It made me feel really good that they are aware of the situation, and they are looking out for us.”

The Melling family raises wheat, sunflowers and flax along with a Black Angus cow/calf herd west of Lodgepole, S.D.

This growing season Perkins County, like most of South Dakota, has experienced drought conditions. So in most fields their bushels will be cut by more than 70 percent.

“Moisture and hail,” LeiLani adds. “We have hail every year.”

Even with the dry conditions, Donald Jr. remains cautiously optimistic. “We are trying to get flax to work because the market is really high right now and the price of sunflowers is astronomical.”

Moisture is not the only issue with flax. Kolby, 13, points out that the viny plant is difficult to combine. “Harvesting it is the worst,” he says. “It sticks to your reel. You pull it off and it does it again.”

Kolby and his brothers are actively involved in every aspect of their family’s operation. They each have an area they enjoy.

For Kolson, it’s raising the crops. “I enjoy watching what is happening throughout the year and see how it is going and see what we achieve at harvest.”

Kolby enjoys hay season. “It’s the shortest season. And I rake the hay.”

“He likes doing the hay because he gets to drive his favorite tractor, a 4440 John Deere,” Donald Jr. adds.

And for Kaison, 9, it’s riding in the combine. “Getting to talk to my brothers.”

“It’s fun watching them do all the stuff on the farm and learn,” says LeiLani.

LeiLani grew up in Hettinger, N.D. Although she wasn’t raised on a farm or ranch, she grew up around it. And she appreciates the lifestyle it provides.

“I like being out and away from people. The peacefulness of being out on the farm – our kids can experience things other people don’t get to experience. It’s a good experience and we can do it together,” she says.

During the work week, LeiLani spends most of her time working off the ranch for social services. “I work in town for health insurance,” she says.

Health insurance has been especially necessary in recent years. In 2017, Donald Jr. began experiencing multiple seizures. It took several tests and specialists before he was told he had Multiple Sclerosis (MS).
An unpredictable disease of the central nervous system, MS disrupts the flow of information within the brain, and between the brain and body.

“Neighbors said he went from 10-foot-tall and bullet proof to human in a day,” LeiLani explains.

Fortunately, with medication, Donald Jr. is able to slow the progression and today, although he doesn’t have the energy he once had, he feels mostly normal.

Without insurance, the medication would be cost-prohibitive.

LeiLani works in Hettinger, only a 30-minute drive from the ranch. A fact that also impacts where their sons attend school. The family lives in the Lemmon, S.D., school district, but the 50-minute drive made their decision to open-enroll in Hettinger easy.

“If you talk to anyone in this township, even though we are in Perkins County, S.D., most of us consider Hettinger, N.D., our hometown,” Donald Jr. explains.

Actively involved in their community, Donald Jr. and LeiLani make time to serve on the township board – Donald Jr. is the current president and LeiLani is clerk/ treasurer. LeiLani also serves as a BetterLife Board Member, and Donald Jr. is President of Perkins County Rural Water.

“In this small, rural community, you have to get involved because there are not enough people to go around,” LeiLani says.

To learn more and view more photos of the Melling Family, visit www.sdfu.org, click on the S.D. Farm and Ranch Families link under the About Us tab.

Forum on impact of tax proposals on ag