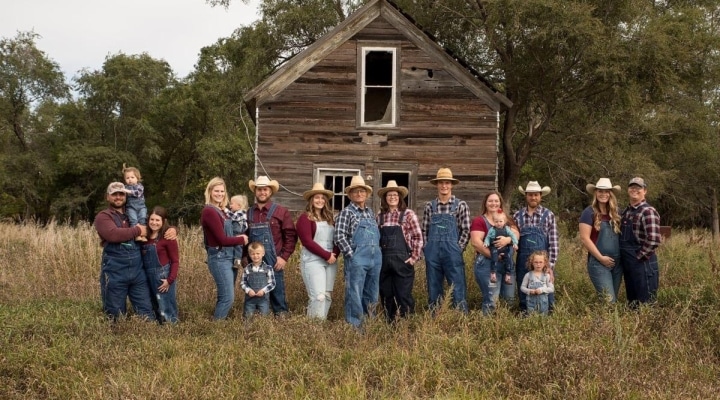 This month SDFU highlights the Nightingale family of White Lake: Zane, Alayna and Kayla; Kalli, Wesley, Ethan and Grayson; Kathryn, Craig, Sandy and Levi; Jennalee, Aurora, Beau and Hanley; Maria and Matthew. Three grandchildren who arrived after this photo was taken are not pictured: Stetson, Aubrey and Walker. The family is pictured here with the Nightingale homestead home. (Courtesy Photo)

“We are a wrestling family. My dad wrestled in college. He also coached wrestling. At one time, all of us kids wrestled,” explained Levi Nightingale.

The youngest of the six Nightingale kids, Levi grew up wrestling – quite literally, explained his mom, Sandy.

“For us, wrestling is a family affair. I helped with the youth wrestling program. Craig coached. Even before our kids were old enough to wrestle, he coached,” said Sandy, a teacher at White Lake High School. “I’d bring the little ones along, and I’d pack snacks and some toys and they would just play in the bleachers beside me. That’s how we spent our Saturdays during wrestling season.”

It’s appropriate the sport of wrestling plays such a key role in the Nightingale family. Sandy and Craig first met because of wrestling. She was a Kimball High School cheerleader and he wrestled for White Lake. They were introduced through mutual friends but did not start dating until they were both in college.

In 1978, Craig became the first wrestler from White Lake to wrestle in college. After college, he said he didn’t intend to become the local wrestling coach, but when tight budgets forced the White Lake School to cut funding to the wrestling program, he was asked to coach youth wrestling.

He served as the volunteer youth wrestling coach for 25 years. When the school re-started wrestling, they asked Craig if he would also fill the role of high school wrestling coach. All in all, there were years when Craig was coaching 40-50 hours a week during the wrestling season.

“I had so much going on, but I knew at the time if somebody didn’t get the wrestling program going, my boys would never have the chance to wrestle,” said Craig, who would get up to feed his cattle at 2 a.m. so he could wrap up chores in time to coach – the bus left for tournaments at 6 a.m.

There are many reasons Craig wanted his children and other White Lake youth to have the opportunity to wrestle.

“Wrestling teaches you so much about life. If you put the hard work in, in the practice room, you will have success wrestling,” Craig explained. “As a coach, I always tell the wrestlers, ‘You won’t win every match, but you will learn more from your losses than your wins.’”

Wins and losses on the wrestling mat have a lot to do with who Craig is today. The tenacity he developed through wrestling, proved valuable when it came to taking over his family’s farm. When Craig was only 24, his dad, Lyle, died unexpectedly of a heart attack.

Like the role of coach, Craig had no intention of becoming a farmer. In fact, just a few years earlier, he had told his parents as much. “Because of college financial aid forms, I knew my folks were losing $10,000 to $20,000 a year. To me, personally, I saw no future in farming. I had a future as a mechanic,” Craig said. “I had my future figured out. I’d given Sandy her engagement ring two days before Dad died.”

Craig’s mom, Ruth, wanted to keep the farm and she needed her only son to help her. It was 1984 and interest rates were at 20 percent. “Here I am 24 and I have the responsibility of a quarter million dollars in debt.”

The Nightingales had been farming in Aurora County since they homesteaded in 1883 and Ruth’s family had been farming about as many generations. Craig accepted the responsibility to carry on his family’s farming tradition. From the start, he eagerly sought advice. He attended every Extension workshop he could and began to make decisions based on what he learned.

He sold the farm’s dairy herd through the Whole Herd Dairy Buyout Program and invested in a farrowing barn. He let co-op agronomists test out no-till farming on his land because they covered the expenses on those acres. Craig saw the benefits and continues the management practice on all his acres today.

He said because his older sisters and their children chipped in, he didn’t have to hire help in the early years.

Craig also credits Sandy with her role in keeping the farm afloat. “I didn’t have take-home pay so to speak, so Sandy’s teaching salary paid the bills. I’ve got to hand it to Sandy. She worked full time and raised our kids.”

Although her parents were dairy farmers when she was young, Sandy says when Craig’s career changed, she was a bit apprehensive. “I didn’t really know much about the farm until we got married. It was hard for me at first because Craig would be out in the field baling late at night. I remember waking up a few times and driving down the road to see if the tractor was still moving – to make sure he was OK.”

Reflecting on where they raised their children, she said she would not do it any different.

“The mom and teacher in me learned to appreciate farm life over the years because there was always something for the kids to do and something to learn,” she said.

Working on the farm also taught the Nightingale kids responsibility and instilled in them a strong work ethic, added middle son, Zane.

“It’s a lot of hard work, but there’s always something going on, and it teaches you a lot of life lessons,” Zane said.

Before returning to farm with Craig, Zane spent a decade working full time for the Air National Guard.

“I had a good job and a nice house, but I didn’t have the satisfaction at the end of each day like I do now,” Zane said. “When we started having kids, I wanted to come back to the farm because my wife and I want to raise our kids the way we were raised. Kayla grew up on a farm too.”

Zane works full time for his parents and he and Kayla also have a small cattle herd that they run with Craig’s cow/calf herd. They recently began leasing a small parcel of land.

When Zane talks about returning home to continue his family’s farming legacy, he refers to farming as an opportunity, not a job.

“I owe it to the generations before me who kept this farm together. Right now, I’m in the combine sitting on a hilltop and I can point out quarters left and right of family farms that don’t exist anymore because the farm was given up during the ’80s,” Zane said.

To learn more about the Nightingale farm, view photos and video, visit www.sdfu.org and click on the S.D. Farm & Ranch Family link in the About Us tab.