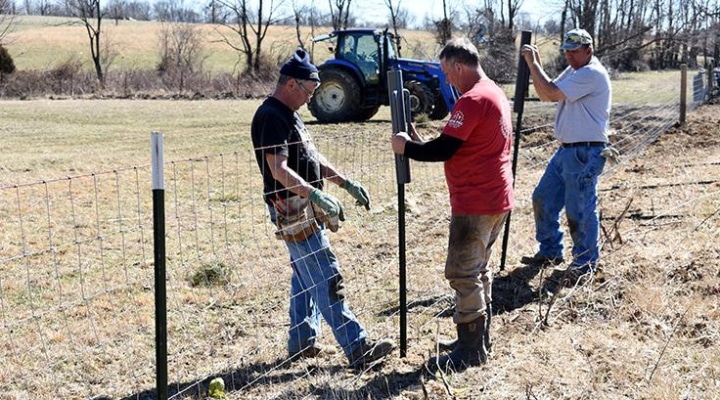 Dealing with the effects of a devastating tornado was all too familiar for the Campbell County farmers. In March 2012, their small community of Peach Grove suffered a blow from an EF-4 tornado. Campbell County cattle farmer Tim Bertram lost his home in that tornado.

“When we pulled up down here, we were like ‘oh boy,’” he said. “It’s the same kind of deal down here. It gives me the quivers to see it again.”

Bertram said the help he received in 2012 was phenomenal, and he wants to help others recover from similar devastation.

“We had a lot of help after the tornado hit my farm,” Bertram said. “There were five trailers coming down my driveway to help before the insulation stopped falling, and more people came that night to pick up debris in my fields. I just want to pay back the help that I got.”

“Being an extension agent for 31-plus years, it is in your heart to serve other people,” Sorrell said. “We had experienced a tornado and received so much help up there in Campbell and Pendleton counties. That set the stage for us to repay all the volunteers and support that we received.”

Sorrell had a strong professional and personal relationship with Darrell Simpson, longtime Muhlenberg County agriculture and natural resources extension agent with the University of Kentucky Cooperative Extension Service. Sorrell contacted Simpson after he got the group of farmers together, and they began organizing plans to help.

The fence repairs come at a critical time for livestock producers with spring turnout quickly approaching.

“It’s so important to get these fences back up and get these cows back on grass,” Simpson said. “Really, it’s been a pretty tough winter with the muck and everything. We really need to get these cattle back out.”

The group was able to assist several area farmers including Muhlenberg County farmer David Jarvis. The night of the tornados, Jarvis lost most of his fencing, four buildings, two calves and damage to the roofs of two homes on his registered red Angus seedstock operation.

He said the support he has received has been so helpful but knows there’s still a lot that needs to be done to get his operation back to pre-tornado condition.

Simpson echoed Jarvis’ sentiments and said the outpouring from fellow extension agents and clients has been tremendous.

“I cannot express my gratitude; it’s beyond words. When I say, ‘thank you’, it just doesn’t seem like enough,” Simpson said. “The folks here are so grateful as well.”