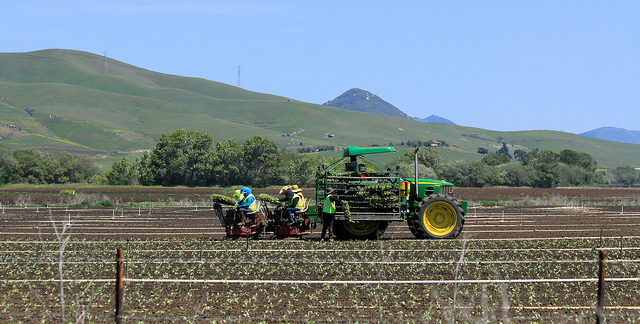 There aren't enough U.S. workers who will do the labor-intensive work in the agriculture industry. (devra, Flickr/Creative Commons)

GREELEY, Colo. (AP) — When Robert Kraft wakes up, usually before sunrise, the first thing he thinks about is his dairy.

There’s always a lot to do.

He’s the owner of Kraft Family Farms, a dairy in Fort Morgan. The day can start in a number of ways but includes milking or feeding a cow. It also can mean feeding a calf still needing milk — the stuff from mama is being saved for humans.

There’s also checking on the cows to make sure they’re OK, watching over pregnant cows, monitoring the breeding or the calving, and oh yeah, there’s vaccines and vet care and clean-up. There’s always pens to clean. That means shoveling poop, which is not exactly a glamorous job.

It’s long, hard, cold or hot work that doesn’t allow for much time off. At most, Kraft gets one day per week off.

It’s a lot, and Kraft knows that.

“We do not shut down,” Kraft said. “We’re like a hospital. The cows don’t stop working on Christmas.”

Another cow needs to be milked about every 45 minutes, and every person has about 60-75 cows worth of a workload. The work seems to get harder as time goes by.

This is why Kraft understands why he and many other agricultural producers struggle to find workers. It’s tough work, and the wages for oil and gas or construction are hard to match.

Kraft gets that, but it doesn’t make it any easier.

SEARCHING FOR A SOLUTION

Dave Petrocco is a third-generation Weld County farmer, and he faces the same, underlying problem: There aren’t enough U.S. workers who will do the labor-intensive work in the agriculture industry.

Many workers used to be willing. But a few years ago, they started to move to other labor-intensive industries like oil fields or construction. Petrocco, like many producers, turns to H-2A workers to fill the void. For Petrocco, the solution isn’t ideal. For Kraft, the solution doesn’t exist right now.

H-2A participants are non-immigrant workers who come to the U.S. for seasonal jobs. The workers aren’t given immigrant status and can work only the job they’re assigned to for the time limit the producer requests.

There are limitations for producers, though. These workers cost more, require extensive paperwork and take a while to reach the fields.

“In my opinion, (H-2A) is a last-resort option to get seasonal farmworkers,” Petrocco said.

For dairies, H-2A isn’t even an option. It’s not seasonal work, so dairies don’t qualify for the extra hands.

Petrocco said he’s spending about 25 percent more per year because of the H-2A program, but at least the participants are willing to do the work.

One of Petrocco’s fields was full of shredded cabbage he could no longer sell. With the H-2A program, workers are guaranteed pay — with a minimum of 40 working hours per week — regardless of what happens. Mother Nature essentially dealt Petrocco two losses.

Farmers can ask for an earlier end to the contract if an “act of God” occurs, meaning an unforeseeable event that leads to less or no need for the workers. This is subjective, however, and has to be reviewed.

Petrocco said that’s not always a good option, either, as there might be more work one or two weeks later, so they need to keep workers around.

At a Colorado Livestock Association meeting this month, a panel of three agriculture leaders talked about issues they are facing. The labor immigration process — which Jackie Klippenstein, vice president of industry and legislative affairs for Dairy Farmers of America, called broken — was something everyone agreed is a serious issue.

For dairies, though, the fight is even harder.

Since the H-2A program can’t be used for dairy farmers, they’re hoping for legislation of any sort.

“You need to address this issue because we will have foreign-born workers milking these cows,” Klippenstein said. “The question is will they be doing it here or be doing it somewhere else.”

Kraft said his dairy has the 75 employees they need, but some of them are high school kids, like his son, who will be off to college soon.

Plus, the harder it is to get U.S. workers, accompanied with the obstacles H-2A presents, there’s the question of how long producers can continue. The additional dollars spent on H-2A workers hurts that much more when low commodity trends come into play.

“We question the future of our business,” Petrocco said. “How long will we be able to withstand the trend?”

For some, like Bob Winter of Windsor, labor problems are part of the reason genetically modified organisms are used in crops. The technology offsets labor, like in sugar beets. The GMOs used in the beet crop tolerate a weed-killer. When you can have weed-killers used on crops, it reduces the amount of workers needed.

That’s why many organic farms are either small or have large staffs. But as many producers find, large staffs are hard to get and keep.

Winter, however, quit raising sugar beets in the early 2000s. He also used to grow barley for Coors, pinto beans, corn for silage, carrots and alfalfa.

“You just couldn’t get the labor,” he said.

WHEN AND WHAT ACTION IS WANTED

In August, Robert Sakata, owner of Sakata Farms in Brighton and president of the Colorado Fruit and Vegetable Growers Association, said at a roundtable event he decided to forgo cabbage — a main crop for his farm — because there weren’t enough workers.

Petrocco theorizes there won’t be any major government reform on farm labor until there are too many crops going to waste.

Kraft said there needs to be something done to help dairy farmers get the labor they need to survive.

He said he knows the labor issue in the agriculture community isn’t priority No. 1, or even in the top five.

But it’s a priority that seems to already be atop many producers’ minds already.

“This trend has been going on for about 10 years,” Petrocco said. “Each year it seems to get worse to find people who are capable and able.”

Information from: The Tribune of Greeley, Co, http://greeleytribune.com

Latest from Trump on dairy trade