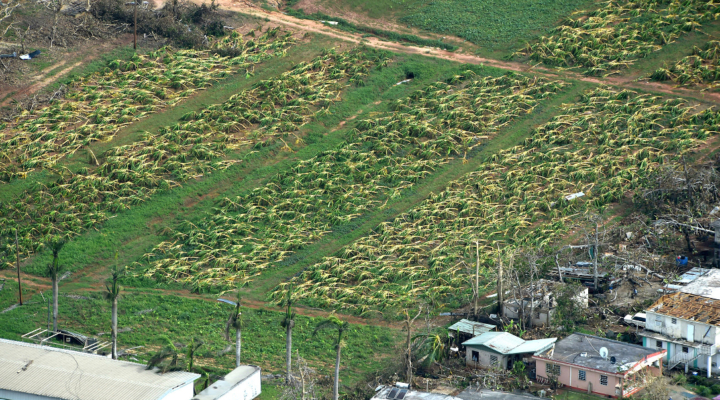 BARRANQUITAS, Puerto Rico — For 21 years Hector Alejandro Santiago spread joy throughout Puerto Rico with the poinsettias, orchids and other ornamental plants he raised and sold to major retailers including Costco, Walmart and Home Depot. In a matter of hours Hurricane Maria wiped it away.

The greenhouses and other buildings on the 40 acres where he grew the plants and prepared them for customers lie in tatters, ripped to shreds by 155 mph (244 kph) winds and driving rain. Trees are flattened.

“I will need to begin from zero,” said Santiago, 43, whose Cali Nurseries is located in Barranquitas, a small mountain city 34 miles (55 kilometers) southwest of San Juan. He’s determined to rebuild and get back into business despite the losses he estimates at $1.5 million.

Hurricane Maria struck Puerto Rico on Sept. 20 as a Category 4 storm, the strongest to hit the island in a century. At least 16 people died and nearly all 3.4 million people on the island were left without power and most without water.

The hurricane devastated agriculture, a small bright spot of economic growth in a U.S. territory mired in a decade-long recession and crushing debt.

While most of the island’s food is imported, statistics from the governor as of late 2016 show about 7,000 people working in agriculture, farm income growing and acres under cultivation up 50 percent over the past four years.

Agricultural income is divided nearly equally between crop and livestock production, according to the most recent Census of Agriculture compiled by the U.S. Department of Agriculture for Puerto Rico in 2012.

Crop sales generate about $271 million a year led by production of plantains, vegetables and melons, nursery and greenhouse crops, fruits and coffee. Livestock sales are about $276 million led by milk production, poultry and cattle, the report said.

Without electricity, Lopez spent days after the storm focusing on finding enough diesel fuel to keep generators running so the cows could be milked and the milk could be kept cool. Failure to milk the cows could lead to an infection that could kill them and the milk can spoil within days without refrigeration.

Lopez said he has managed to get back into operation.

Jayson Harper, a professor of agricultural economics at Penn State University, spent three months in Puerto Rico in 2014 and said the hurricane has destroyed the high value crops that farmers produce, some which take years to replace.

The losses are different from crops in the Midwest, where a tornado could take out a field of corn. It’s a major loss but the farmer can replant the next year. Coffee trees, when destroyed by wind, take several years to mature enough to produce beans again.

The coffee industry was hit at the worst time, just before the beans are picked, said Eva Legner, who with her husband Kurt operates Hacienda Pomarrosa in Ponce, a city on the island’s southern coast where they have 8 acres of coffee plants.

The couple operates a small specialty coffee growing operation and a cottage where guests can stay on the coffee farm, tour the field and experience production. It is part of the island’s growing agri-tourism industry.

She said the storm cut right through the island’s mountainous coffee-growing area. The specialty beans their farm produces grow on bushes that are planted beneath taller trees to protect them from direct sun.

“We’ve lost many trees which fell on the bushes and broke them,” Legner said. “My husband tells me we lost a complete harvest.”

Santiago, the ornamental plants farmer, said he was unable to get to his farm for five days after Maria. When he arrived he found his employees had been working since the first day.

“I just started crying, I choked up, when I saw them working like nothing had happened,” Santiago said. “They give me the strength to not give up and to do whatever I have to do to continue with my business.”