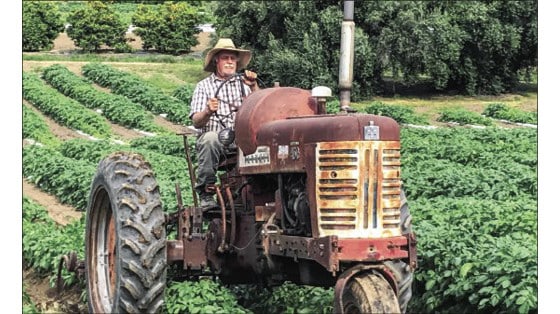 Despite the pandemic, work on the farm continues for Tulare County organic farmer James Birch, who says he’s “having a good time focusing on my fields and doing something different when it comes to marketing my produce.” Rather than going to farmers markets, he and his wife Dawn have switched to selling their produce to a CSA in Los Angeles and at their farm stand in Three Rivers. (Photo/Dawn Birch)

At the time, Gov. Gavin Newsom had called on seniors and individuals most vulnerable to COVID-19 to stay home, so the couple ended their twice weekly, 200-mile trips to Santa Monica, where they sold their organic produce mostly to chefs who bought truckloads of products from farmers markets.

When restaurants closed as the coronavirus spread, James Birch said cash flow to his farm plummeted overnight, leaving him and his wife no choice but to upend their business strategy and look for alternative market avenues—something many organic farmers have had to do as the pandemic shook markets throughout the food chain.

“We had to; we couldn’t survive,” he said. “Our income went from many tens of thousands of dollars to nothing, and it wasn’t like we had money in the bank.”

Birch said the farm immediately diverted some of its produce to a newly formed community-supported agriculture business in Los Angeles. Another outlet is the couple’s existing self-serve farm stand near Three Rivers, which Birch said “most people in town didn’t even know existed.” Thanks to social media and word of mouth, he said, the farm stand may now be “the busiest business in town.”

Whereas his niche was in specialty greens and vegetables chefs favored, Birch said he’s changing his crop mix to cater to people cooking at home, with plantings of staples such as carrots and strawberries that he never grew before. Herbs he grew mostly for beneficial insects and habitat will now be harvested for the farm stand, he added.

Skipping farmers markets has allowed him to cut his overhead, while government loans will help cover the farm’s payroll, allowing him to keep his employees and to “get through,” Birch said, though he noted his current income falls two-thirds short of what he had been making. With CSA subscription boxes growing from 100 to 400 within a couple of weeks, he said he thinks “there’s a lot of growth potential there” and that demand for CSAs will continue to rise in the pandemic era.

The key to starting the CSA, he said, was building a proper website to handle orders. Though too early to know how successful his new venture will be, Zadeh said he’s had “great numbers of people coming out” and spreading the word on social media.

“There’s a whole bunch of us that are starting to do the CSA boxes,” he said. “We’ve just been lucky to have a strong customer network in the LA area (who are) farmers market patrons and family friends who are trying to help us out.”

Zadeh said he plans to continue the CSA as a long-term business, noting he’s already looking to partner with another farmer who can supply salad greens in the summer, when triple-digit heat waves in his region make growing lettuce difficult.

Steve Zaritsky, an organic egg farmer and cattle rancher in Santa Barbara County, said he’s had “many phone calls” from customers asking him to ship products to their homes, but Zaritsky said he doesn’t have the manpower nor is he set up to make CSA deliveries. Prior to the pandemic, his revenue came solely from selling at 18 Southern California farmers markets, all of which closed during the initial days of the state lockdown, forcing him to let go all but one of his employees.

Reconnecting with old contacts in the retail business, Zaritsky said he began selling some eggs to grocery stores, which struggled to find eggs in the early weeks of the crisis.

“They were taking everything I had,” he said. “I was getting calls from everybody in the world and then all of a sudden, it flattened out. Everybody started buying normal again.”

Zaritsky said his sales slowed just as egg production on his farm is rising. In March, he took delivery of new chicks in anticipation of demand during spring and summer months, when he typically moves “huge volumes” at farmers markets. Though some of those markets have reopened, Zaritsky said he attends just one because he can’t afford to pay employees to staff them. Social-distancing requirements have also limited attendance at the market, he said, with his sales falling more than 55%.

“Paying the bills is just really tough,” he said. “I’ve been trying to shift the eggs over to different avenues, but when you’re getting $8 from the farmers market and you’re wholesaling the eggs to the grocery store at $3, it’s a huge hit.”

For Dana Corbin, who produces organic eggs in Manteca for sale at San Francisco Bay Area farmers markets, the challenge has been trying to keep up with demand—to the point she’s now limiting how many eggs each customer can buy to ensure she has enough for all her markets.

“I’m picking up new clients because the supermarkets have run out, so they are now turning to the farmers markets to get their eggs,” she said.

San Benito County organic farmer Phil Foster said his diverse market channels, which include farmers markets, several CSAs, a produce stand and wholesale markets, have buffered him from shocks created by the pandemic. Though business at some farmers markets is slower due to social distancing, he noted increased orders from CSAs have offset lower sales elsewhere.

“Things are not stellar, but we’re keeping our nose above water at this point,” Foster said. “We’ve been real steady at markets for a number of years, and it seems like those customers are still buying and supportive.”

Because his production is “pretty low volume right now,” Riverside County organic farmer Gerald Bodily said he’s been selling his produce directly from the farm in lieu of going to his usual farmers markets. Once he begins harvesting tomatoes and other summer crops, he said he plans to advertise on Craigslist and begin taking orders.

July 1 is the deadline to apply for Jersey scholarship

Plant pathologists at Penn State to aid investigation into lettuce disease
May 31, 2020

Ohio farmers can apply for assistance
May 29, 2020