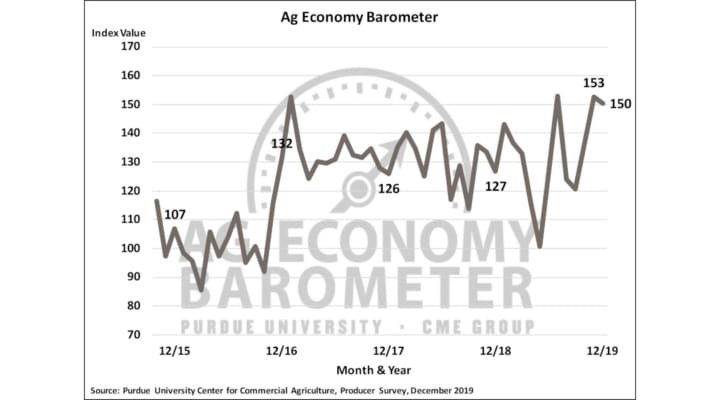 Farmers optimistic about the future, even as their perception of current economic conditions drops. (Purdue/CME Group Ag Economy Barometer/James Mintert)

WEST LAFAYETTE, Ind. and CHICAGO — Producer sentiment regarding current economic conditions of the agricultural economy dropped 12 points in December, according to the Purdue University/CME Group Ag Economy Barometer. The Index of Current Conditions registered a reading of 141, down from 153 in November. Meanwhile, the Index of Future Expectations remained strong, up 2 points in December, to a reading of 155.

The Ag Economy Barometer, which encompasses results from both indices and is based on a mid-month survey of 400 U.S. crop and livestock producers, dropped 3 points in December to a reading of 150, down from 153 in November.

In the December survey, producers were asked whether their farm’s 2019 financial performance was better, as expected, or worse than their initial budget projections. Just over half (52 percent) stated that their initial projections matched their farm’s financial performance; 30 percent stated it was worse, and 19 percent stated it was better than expected.

“These results are indicative of the variability in economic conditions on U.S. farm operations, with some farms performing better than expected and others worse than expected,” Mintert said.

To better assess the level of financial stress among U.S. farms, producers were asked in both the November and December surveys whether they expected their farm’s 2020 operating loan to be larger, about the same, or smaller than in 2019. In a follow-up, those who expected a larger loan were asked why. Approximately 1 of 5 farmers on the two surveys indicated that they expect to have a larger operating loan in 2020 compared to 2019 and, of those, 3 of 10 indicated that the reason is unpaid operating debt from 2019. Carrying over unpaid operating debt from year to year is an indicator of financial stress, and these results suggest that about 6 percent of farms surveyed for the Ag Barometer in late 2019 were experiencing financial stress.

Producers remained relatively optimistic that a resolution to the ongoing trade dispute with China will take place soon and that the outcome of the dispute will benefit U.S. agriculture. In December, 54 percent of respondents stated they expect a resolution soon. Although this is down from 57 percent in November, it was still the second most positive response to this question since last March. The percentage of producers who expect the outcome will ultimately favor U.S. agriculture dropped to 72 percent, down from 80 percent in November. Since this question was first posed in March 2019, over 70 percent of respondents have, on average, indicated they expect a favorable outcome to the trade dispute for U.S. agriculture.

Read the full December Ag Economy Barometer report at https://purdue.ag/agbarometer. This month’s report also looks at producers’ views on future farmland values, both 1 and 5 years out, as well as whether they think now is a good time to make large capital expenditures on farm machinery and buildings. The site also offers additional resources – such as past reports, charts and survey methodology – and a form to sign up for monthly barometer email updates and webinars. Each month, the Purdue Center for Commercial Agriculture provides a short video analysis of the barometer results, available at https://purdue.ag/barometervideo.

For more articles on the farm economy, click here.