Home » Farmers on the front lines 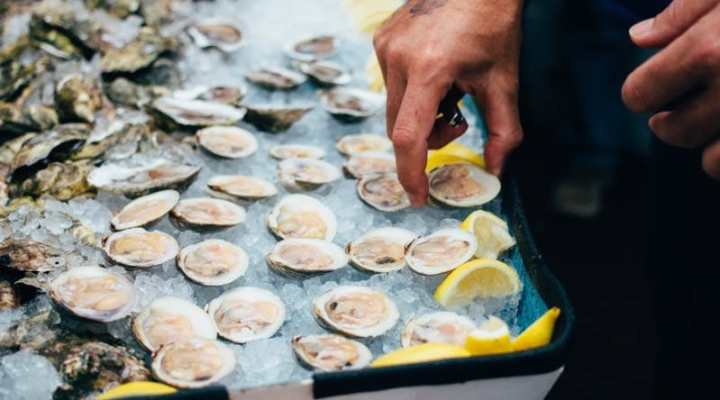 The region that currently accounts for 90 percent of the world's total production -- Indo-Pacific countries such as China, Bangladesh and Indonesia -- will likely feel the biggest impacts. (pangeashellfish, Flickr/Creative Commons)

SANTA BARBARA, Calif. — Many of the world’s future farmers will likely be farming oceans, as aquaculture – the cultivation of fish and other aquatic species – continues its expansion as the fastest growing food sector. New research shows that in order for this next generation of farmers to thrive, there is an urgent need to prepare them for climate change.

Researchers from the National Center for Ecological Analysis and Synthesis (NCEAS) at UC Santa Barbara have published the first comprehensive analysis of how climate change could affect marine aquaculture production, specifically of finfish and bivalves (e.g., oysters), around the world. Published in the journal Nature Ecology and Evolution, their study, “Global change in marine aquaculture production potential under climate change,” reveals that climate change is not only a threat to global production in the future, but also is affecting producers today.

“Climate change is impacting marine aquatic farmers now, and it’s likely to get worse for most of the world if we don’t take mitigating measures,” said lead author Halley Froehlich, a postdoctoral researcher at NCEAS.

Their analysis reveals an important and previously missing piece of the puzzle in understanding how climate change will affect the future of global food security. It provides an essential first step toward helping ocean farmers and coastal countries prepare for the coming changes and to ensure sustainable seafood production worldwide.

According to the newest State of World Fisheries and Aquaculture report by the United Nations’ Food and Agriculture Organization (FAO), aquaculture’s contribution to global seafood production now surpasses that of wild-caught fisheries. The sector is gaining increasing attention globally as important for achieving not just food security but also Sustainable Development Goals.

“There’s a lot of push for ‘blue growth’ in aquaculture in both developing and developed regions, but less effort has gone into how to develop adaptive measures under climate change, mostly because we do not have a good sense of the level or location of impacts,” said Froehlich. “Our study begins to shed light on these unknowns.”

The authors found that coastal countries should expect their overall potential for aquaculture production to decline over time, as water temperatures rise and oceans undergo other shifts due to a changing climate.

What is more, the region that currently accounts for 90 percent of the world’s total production — Indo-Pacific countries such as China, Bangladesh and Indonesia — will likely feel the biggest impacts. Without intervention, by midcentury declines in finfish could be as high as 30 percent in some areas, and there is even the risk of a complete loss of suitable waters for bivalves.

Such declines would harm not only the global availability of farmed seafood but also the lives of Indo-Pacific people, who depend more heavily on seafood for sustenance and farming for livelihoods than the rest of the world.

“The issue is less about whether or not we will be able to grow enough fish in the ocean under a changing climate globally — we can — and instead about who wins and who loses, and by how much,” said co-author Ben Halpern, director of NCEAS and a professor at UCSB. “Climate change will likely have highly inequitable consequences among ocean farmers.”

There will be some “winning” patches of ocean, however, where aquaculture production could fare well or better under climate change. For example, rising water temperatures will make sub-polar waters, such as those near Norway, hospitable for finfish farming.

Even so, the study indicates there are no absolute winners or losers among countries that are farming or could farm the ocean. Rather, production levels worldwide will be patchy due to variable ocean conditions, even within the same country.

The authors looked specifically at three shifting ocean conditions that are among the most important for supporting aquaculture production, as well as with sufficient scientific information available to analyze: warming sea surface temperatures, ocean acidification and changes in algae, a primary food source for oysters and other bivalves.

The patchiness in future production potential will matter when it comes to preparing ocean farmers for climate change or mitigating its impacts — and is part of what gives Froehlich hope.

One strategy to help ocean farmers adapt will be to move or place farms in more favorable ocean patches, a measure the FAO also highlighted in another recent report. According to Froehlich, good planning now could help marine aquaculture adapt to the changing conditions while enabling ocean planners to balance aquatic farming with the many other uses of oceans, such as wind energy and conservation.

“The industry is still in its growing phase, and that allows some flexibility,” said Froehlich.

This flexibility is particularly advantageous for countries with large Exclusive Economic Zones (EEZs), such as the United States or Australia, since having more ocean space to move farms could alleviate much of the threat. Already, Froehlich said, there are reports of salmon farmers in Australia relocating their pens because waters are getting too warm, and U.S. oyster farmers are moving their hatcheries away from the acidified waters of the Pacific Northwest.

“Aquatic farmers are on the frontlines of climate change. Some are already seeing the effects and know they need to be prepared for what’s to come. But that’s going to take planning by not only the farmers, but governments too,” emphasized Froehlich.

While countries with more winning patches may be able to pick up the slack where others fall short, local planning will be essential to support small-scale farmers, the current majority of producers, who lease ocean plots or specialize in a particular species, as it may be harder for them to move their farms or switch species.

According to Halpern, their results offer a blueprint for long-term planning for ocean farming.

“Governments provide permits and leases for growing different species, and setting those locations now with the future in mind will help avoid putting things in riskier places,” he said. “If you were a land farmer, would you want to buy property that will be plagued by drought in 15 years? I doubt it. The same thinking should be applied to ocean farming.”