Home » Farmers markets: An important part of our food system then & now 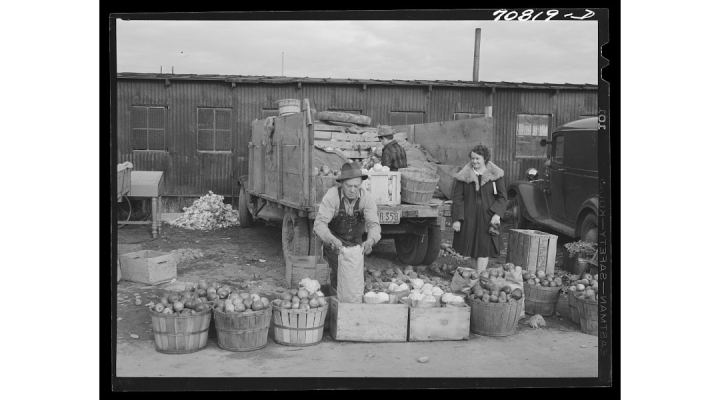 GREENWICH, N.Y. — Summer is here which means it is the high point of the year for farmers markets. Farmers markets across the country will be offering fresh produce, meat, flowers, and other local products to their communities all summer. Farmers markets have played a role in the United States’ food systems since colonial times and continue to play an important role today.

The concept of a marketplace in which farmers can sell their crops directly to consumers dates back to ancient times. The ancient Egyptians had a version of the farmers market where farmers that worked along the Nile River would bring their produce to a marketplace to sell. This practice dates back to around 5,000 years ago.1 The ancient Greek agora was a place where people of a town or city congregated to discuss affairs, conduct business, and sell food. Similarly, the Roman macellum was an indoor marketplace where meat, fish, and various kinds produce were sold. Other ancient civilizations had similar gathering places to sell food and other goods, and the practice was common through the Middle Ages and beyond.2

The first officially recorded farmers market in the United States was founded in Boston in 1634. Major cities in other colonies established markets around the same time such as Hartford, CT in 1643, and later New York City around 1686 and Philadelphia in 1693.3 Street markets or farmers markets were common through out the 18th century and early 19th century. For country farmers who sold some of their products in towns or cities, farmers markets provided an avenue to not just earn income, but also to connect to townspeople and their communities.

Farmers markets increasingly fell out of fashion in the later half of the 1800s as cities continued to grow. The expansion of cities pushed farmers and farmland further from densely populated areas. Advances in transportation, packaging, and food processing gave consumers alternatives to getting fresh food at markets. Grocery stores or general stores were eventually more convenient than markets.4

Farmers markets did see a brief return during the 1930s and 1940s as the Great Depression and World War II disrupted food systems. An example of this occurred in San Francisco in 1943. San Francisco-area fruit growers could not sell as much of their crops to local canneries which were short-staffed due to the war. As opposed to letting their remaining harvests rot in the field, a group of five farmers went to the city to sell some of their crops. It turned out the city dwellers were having difficulty affording fresh produce due to the war and rationing, so this small market became swarmed with customers wanting fresh fruit and they sold out in just two hours. Hearing of the success of the event about 25 farmers returned the next day and the same thing happened. By the next week 135 farmers showed up to sell their wares, and the first San Francisco farmers market was established.5 The disruptions caused by the Depression and the war made farmers markets a necessity during this time.

The rise of the supermarket in the post-WWII decades again led to the decline of the farmers market. Better roads, refrigeration, and western irrigation infrastructure made supermarkets a more convenient choice for shoppers to get their food. By 1970 it was estimated that there were only around 340 farmers markets across the country.6