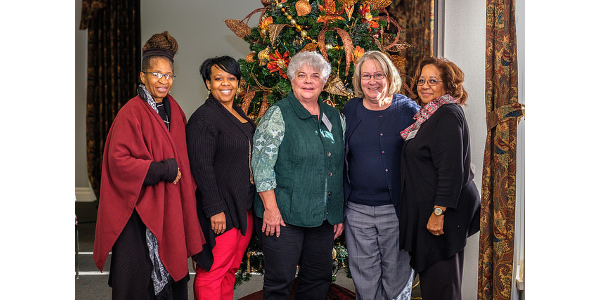 MCPHERSON, Kan. — For Donna Pearson McClish, it all started with a question.

It wasn’t her question, not then, though it would become hers in the weeks and months and years to come, and uttered in such a way that while anyone in that room could put forth a response, by familial hierarchy the answer was hers alone to give. As the eldest of 12 siblings, it was her birthright, her responsibility, her duty, and she felt the weight and gravity of it as surely as the chair she was sitting on.

Three years ago, it was, three momentous years. She and her brothers were sitting around the table of the Pearson family farm, a small operation at the end of a dead-end road on the outskirts of Wichita, when the conversation turned to an excess amount of fresh produce that remained unsold. “What are we going to do with it,” one brother asked, and before the question had time to grow stale McClish took charge and said, “Let’s do something with it.”

Which, of course, invited even more questions, most of them without even a glimmer of an answer. Not that she was too concerned. Questions were powerful, more summons than inquiry. Answers were what happened when questions were raised. And if her voice sounded light and airy whenever she said, “Every question has an answer,” there was steel inside of it.

Finding those answers would require an act of such audacity and ingenuity that even now government agencies struggle to categorize the nature of the business she created, even though she works closely with some of them.

“The government doesn’t know what we are or how to characterize it, because most farmers markets are stationary,” McClish said. “I think we’re the only one that’s mobile.”

Mobile, as in, on wheels. Or, as she liked to think of it, takin’ it to the streets.

McClish, founder and director of Common Ground Producers and Growers, Inc., addressed members of the Kansas Farmers Union during their annual state convention held Dec. 7 and 8 in Wichita. The convention’s theme, “Helping Communities Help Themselves,” focused heavily on the need for individuals, families and communities to work together in the face of an increasingly uncertain future as a new presidential administration takes office. Topics included Managing Change in Turbulent Times, A New Vision for Agriculture, Cultivating Accessible Agriculture, Responding to the Next Farm Crisis, and policy and legislation updates on both state and national levels.

Common Ground Producers was an example of agricultural innovation providing solutions to problems increasingly endemic to urban areas. In McClish’s thinking, it was all about connecting the dots. If every question had an answer, then it stood to reason that every problem had a solution. But before she could connect a solution to the problem, she first had to define the scope of the problem, and that wouldn’t happen until the problem manifested itself.

Her first order of business was to arrange an interview with Bev Dunning, director of the Sedgwick County Extension Office. The meeting went well even if her questions remained unanswered. Dunning recalled working with McClish’s mother during the 1980s teaching sewing classes on the front porch of the farm, so there was a warm connection between them.

Shortly afterward, McClish was on her way to a meeting when her phone started ringing. Friends and family members were asking if she’d seen that morning’s newspaper, where an article announced Dunning’s retirement after 50 years of service. She hadn’t but promised to grab a copy after the meeting.

The calls intensified, only now people were asking about her plans for the farm. Plans? At the first opportunity, she bought a paper and started reading. The first sentence stunned her: “Donna Pearson McClish wants to start a farmers market in Wichita.”

“This wasn’t even on the drawing board,” she said. “It was just an idea we had talked about.”

Dunning went on to say that normally she wouldn’t have been directly involved in such a meeting but because she had worked with McClish’s mother, it was very important to her. McClish found herself tearing up.

And so she had her answer, even if in a most unexpected way.

That first year, 2014, the family was ready for business. The amount of produce they had amassed was matched only by their enthusiasm, and far, far greater than the number of customers that showed up. The response was, frankly, underwhelming.

A few weeks later a friend dropped by.

“We have a problem,” her friend said.

The problem had nothing to do with McClish and the Pearson family farm, though directly or indirectly they might provide a solution, her friend said. The problem was Wichita itself, and a growing lack of access to fresh, affordable food and vegetables. Mom and pop grocery stores had closed down, leaving only a scattering of big box stores to fill the gap. When Walmart closed five smaller stores in the inner city, that gap widened. Many residents had to travel miles for groceries, a considerable handicap for people with limited means of transportation, or the elderly. The elderly were particularly affected by the loss. Nationally, the trend had left more than five million citizens aged 60 or older facing hunger. And while retailers like Dollar General and Family Dollar and others had trickled in, their food items were packaged in cans or boxes or flash frozen in the freezer section.

That hollowing out of the inner city wasn’t peculiar to Wichita, her friend said, but was taking place all across America. There was even a term for it-a food desert-and Wichita had 44 square miles of it.

Her friend, a coordinator for a senior citizen high rise facility, asked if she could deliver fresh produce to the center. By doing so, it would solve problems for both the residents and McClish. A supplemental food assistance program for residents aged 60 and older left them trapped in a virtual Catch 22, she explained. Though they were provided vouchers to use at farmers markets, they had neither transportation nor a farmers market. Pearson farm, on the other hand, had produce that it needed to sell.

McClish didn’t hesitate. Since customers weren’t coming to the farm, the farm would go to the customers. And so Common Ground Producers and Growers was born.

She and her grandson piled as much as they could squeeze into a 2000 Honda van and hit the road. By the time they arrived, residents were lined up waiting for them. The produce was an instant hit, and the deliveries so successful that the Sedgwick County Department on Aging asked if they would deliver to all of the facilities.

“Seniors are an overlooked population,” McClish said. “In the food desert areas they have limited resources and limited transportation, so the senior residents of Wichita became our target audience.”

In 2014, Common Ground served 11 senior centers and residences. The following year that number increased to 16, and in 2016 they expanded to 23 centers. They deliver twice monthly on a rotating schedule that includes the towns of Haysville, Derby, Eldorado, Augusta, Andover and Wichita. Currently they serve a total of 1,239 senior citizens and other community customers, she said.

At each delivery site, tables are set out with ample room for residents with wheelchairs and walkers. For their part, the residents are delighted to be able to pick their own produce, even if they don’t always know what to do with it.

McClish discovered early on that people had a lot of questions about fresh produce, such as how to take care of it, how to cook it, can it be frozen, what recipes would they recommend, and she knew that they had to be prepared to answer their questions. The Sedgwick County Department on Aging is now working with some of the centers to provide on-site cooking classes, and Common Ground supplies recipes. For the rest, McClish has to be the resident expert on cooking.

“We learned that I’m going to have to know how to cook all this stuff,” she said. “So the other day, I cooked acorn squash. I hadn’t cooked it before and they kept asking me about it, so I tried it. Delicious. Delicious.”

One resident suggested that instead of telling them how to cook the produce, she should cook it herself and deliver it ready for consumption. “I told her I’m not going to start that,” she said.

Pricing has to be kept to a manageable level because they can’t sell at regular farmers market prices. “Ours is not a bottom-line system, ours is a if-you-need-food, we-can-provide-food-for-you system,” McClish said. “Our motto is, all are fed and no one is hungry. We don’t turn anyone away. We take all forms of payment, but if they don’t have any money, they get fed anyway. We’ll even barter.”

Doing that requires a network of community growers, which in turn sells their surplus produce to Common Ground. In order to keep up with demand, the company intends to increase that network as they reach out to several new communities next year.

“What is happening just thrills my heart,” McClish said. “Everyone is benefitting on both ends. The growers are making extra income during the growing season, and the seniors are getting fresh produce at a reduced cost.”

Purchasing additional delivery vans, delivering year round and adding staff are also goals they’re exploring. “My grandson and I have done a good job holding it down, but there comes a time when you can’t do everything,” she said.

Getting people to take control of their food by teaching them how to cook and prepare it as well as to store it continues to be a major emphasis. “We are preparing people for winter,” McClish said. “More and more people need food, and we need to tackle these issues now and be prepared for what’s coming ahead.” she said.

McClish’s mother tried to instill the same concept into the community back in the 1980s, she recalled. “All the time, over and over, my mother used to ask, what are we going to do when we don’t have grocery stores to go to? And guess what, in my lifetime I have seen that take place,” she said. “This legacy my mother and father left us is a lot of hard work, a lot of due diligence, but we are on the cutting edge of meeting the needs of people in a food desert and food insecurity area. I say like we’ve never meant it before, we can do it. I think we can get together and we can get it done.”

For every question, an answer.

Kansas Farmers Union is the state’s oldest active general farm organization working to protect and enhance the economic interests and quality of life for family farmers and ranchers and rural communities. For more information, visit their Web site at www.kansasfarmersunion.com or call 620-241-6630.