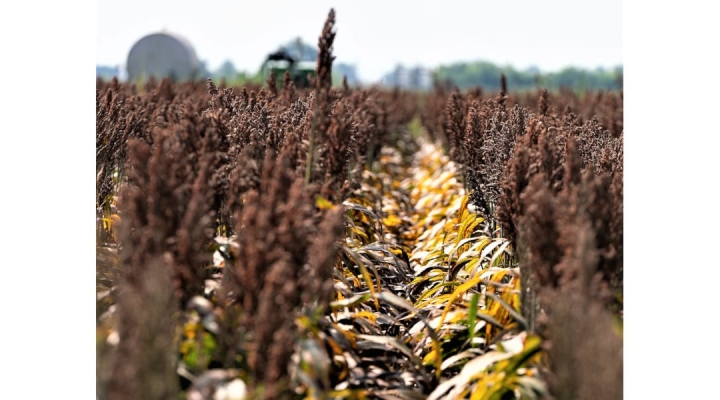 Getting late-planted sorghum to harvest could be an uphill battle for Texas producers, especially with nature, the grain market and break-even budget costs aligning against profit potential. (Texas A&M AgriLife photo Laura McKenzie)

COLLEGE STATION, Texas — Late-season sorghum has been a consideration for Texas growers stymied by drought so far, but the risks appear higher than the reward, especially in South Texas, according to a Texas A&M AgriLife Extension Service report.

“Drought has depressed interest, even on irrigated acres,” Trostle said. “On dryland, planting is a moot point unless we receive significant rain, and there are no assurances for that. There are also the input costs to contend with, and I think growers with irrigation are going to sit it out.”

Trostle said there is no good information to provide growing recommendations for much of the state.

Texas A&M AgriLife does not have data regarding the crop potential for mid- to late-summer planted sorghum for fall production in the Coastal Bend and South Texas. This is because, historically, late plantings of sorghum have never been the practice in those regions.

However, there is still time for historic planting dates in the High Plains, Trostle said. Shorter-maturity hybrids can be planted in the Lubbock region until July 10 and July 15 to the south. But yields for late-planted hybrids is typically 15%-20% lower than medium and early hybrids.

Crop insurance is also not available for sorghum planted this late, Trostle said.

Other grains like sorghum and wheat often track similar to corn prices. The price reductions will likely be another influence on producers already facing high input costs and risks of planting in such droughty conditions, Trostle said.

“Much of the High Plains did get 3-6 inches of rainfall from May to June, and that helped make things possible,” he said. “But we are going on a month without rain. Late dryland plantings are unlikely, and even producers with irrigated fields are weighing the risks versus the crop potential.”

Hoping for better luck next time

Saenz and Lopez said dry conditions are not the only thing sorghum growers would be up against in Central and South Texas. They also reported a litany of potential issues that could impact late-planted crops beyond moderate to exceptional drought in the regions as shown,  on the U.S. Drought Monitor map for Texas.

Saenz and Lopez said damage to sorghum grain heads by birds, the high potential for sugarcane aphid infestations, and potential for tropical storm damages make late-planted sorghum risky. There is also the fact that the crop would sap moisture and nutrients from the soil needed for next year’s crops.

Some growers in the Rio Grande Valley do plant late corn between mid-July and Aug. 1 because corn handles cooler temperatures in November. But there is always the danger of an early freeze arriving in November for either crop.

Trostle’s 2022 Alternative Crop Options after Failed Cotton and Late-Season Crop Planting for the Texas South Plains provides some guidance for producers hoping to make a crop in his region.

“Producers may be looking for a crop to plant, but the cost of diesel and nitrogen fertilizer and with a lot of popular herbicides and insecticides having limited to no availability, it makes any decision tough,” he said. “I think a lot of growers are just going to wait and hope that input costs go down and growing conditions improve for 2023.”