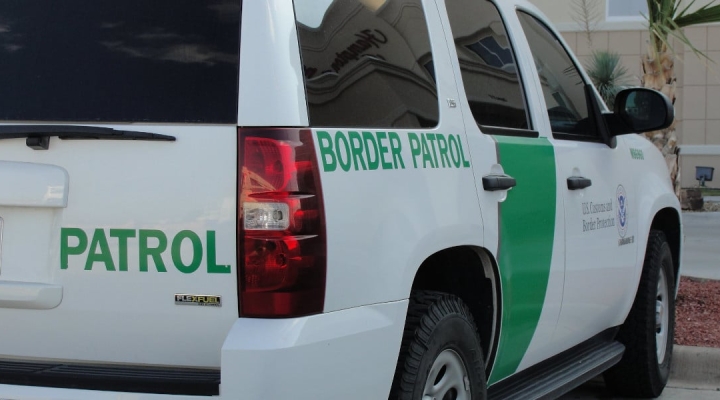 The Border Patrol’s Del Rio sector, which includes Eagle Pass where most of the nearly 470-acre farm is located, is fast becoming the busiest corridor for illegal crossings, with thousands passing each week onto the farm alone. The sector may soon surpass Texas’ Rio Grande Valley, which has been the focus for the last decade. (Photo: Frank Heinz, Flickr/Creative Commons)

EAGLE PASS, Texas (AP) — A Texas pecan farm nearly the size of Disneyland has become entangled in a turf war between the Biden administration and Republican Gov. Greg Abbott over immigration enforcement on the southern border.

Hugo and Magali Urbina, who bought Heavenly Farms in April 2021, at first welcomed the state footing the bill for a new chain-link fence through their property earlier this year as part of Abbott’s multibillion-dollar crackdown on border crossings along the Rio Grande. But then, one day, they found the fence’s main gate unexpectedly locked.

The lock was put there, the couple says, by Texas authorities who have spent months arresting thousands of migrants on trespassing charges on private land. But the Urbinas didn’t want the lock and neither did the U.S. Border Patrol, which found it impeded the agency’s own immigration enforcement and had it removed.

Now a single gate on the 1,200-mile Texas border has swung open a new dust-up over how to address near-record levels of migration on America’s southern doorstep, a fight the Urbinas say they want no part of.

“Unbelievable,” Abbott lashed out on social media last month after the lock was removed. “While Texas secures the border, the federal government is enabling illegal immigration.”

The dispute is the latest example of how Texas’ unprecedented challenge to the federal government’s authority on the border has created a clash among agencies working at cross purposes.

The Border Patrol’s Del Rio sector, which includes Eagle Pass where most of the nearly 470-acre farm is located, is fast becoming the busiest corridor for illegal crossings, with thousands passing each week onto the farm alone. The sector may soon surpass Texas’ Rio Grande Valley, which has been the focus for the last decade.

The Urbinas do not oppose Abbott’s massive border mission. But in the case of the lock, they say it went too far. They blamed what they see as a lack of single command in an area saturated with state troopers, Texas National Guard members, U.S. Border Patrol agents and local authorities, all of whom constantly cross paths and often work in tandem.

“They are all doing what they are being told,” Magali Urbina said. “It is really not their fault, but there is nobody running or telling them. There is no boss.”

It isn’t an isolated case.

In September 2021, Texas troopers told Border Patrol agents on horseback to block migrants from crossing the river to a camp of nearly 16,000 predominantly Haitians in Del Rio, about an hour’s drive north of Eagle Pass. Images of Border Patrol agents twirling reins at overpowered migrants sparked widespread criticism, including from President Joe Biden.

The internal investigation found that agents acted against Border Patrol objectives and “resulted in the unnecessary use of force against migrants who were attempting to reenter the United States with food.” The agents had been “instructed to help where needed” and not told anything more specific about how to respond to requests from another agency.

Abbott, who is seeking a third term, launched his multibillion-dollar “Operation Lone Star” last year, creating an overwhelming presence on the border. The size and cost of the mission has grown in defiance of the Democratic administration in Washington:

— Since July, the state has picked up 5,600 migrants who have entered the country illegally in Texas and returned them to ports of entry on the border, a role that has been reserved for U.S. Immigration and Customs Enforcement.

In Eagle Pass, state buses drop off migrants throughout the day at a border crossing with Piedras Negras, Mexico, as far as they can go. CBP releases them, creating a circular flow.

Since April, Texas has bused more than 7,000 migrants to Washington and New York on free, voluntary trips, attempting to call attention to what it considers Biden’s failed policies. This week, Abbott began sending buses to Chicago, with the first arriving Thursday at Union Station. White House press secretary Karine Jean-Pierre has called the move a “political ploy.”

— Since last year, the state has charged more than 4,800 migrants with trespassing, a misdemeanor that carries a maximum penalty of a year in jail.

The Urbinas’ farm, which winds along the river, includes an old house that the couple is restoring for visitors to sample pecans, coffee and wine. They were inspired by Fredericksburg, a town of German heritage near Austin that draws tourists.

The farm of neatly manicured rows of trees had long drawn migrants but was relatively peaceful before the lifelong Eagle Pass resident couple bought it. It is located at the end of a stretch of new border fencing that was built on Abbott’s orders, on the edge of the 30,000-resident town that is dotted with warehouses, decaying houses and chain stores.

Agents stopped migrants nearly 50,000 times in the Del Rio sector in July, with Rio Grande Valley a distant second at about 35,000. About 6 of 10 stops in the Del Rio sector were migrants from Venezuela, Cuba or Nicaragua, who are likely to be released to pursue their immigration cases because poor diplomatic relations with those countries means the U.S. can’t send them home.

Migrants cross the river and climb a few feet uphill amidst overgrown Carrizo cane and concertina wire to surrender on the farm’s edge, expecting they will be released. U.S. Border Patrol agents, state troopers and journalists are a regular presence.

Border Patrol unlocked the gate and took migrants in for processing, a regular procedure for the federal officials in any situation involving a lock within 25 miles of the border, said Jon Anfinsen, president of the National Border Patrol Council union chapter that includes agents in Eagle Pass.

“The governor is telling everyone, ‘Secure the border.’ I have no doubt that is the intent but the reality of it is that it’s just not that simple,” Anfinsen said. “We’ve been doing this forever and it hasn’t been fixed yet. So it’s a noble attempt, I suppose, but we’re going to have to take these people into custody.”

Ericka Miller, a spokeswoman for the Texas Department of Public Safety, said the agency is accommodating the Urbinas’ request to have the gate unlocked. She said DPS is also working to have carrizo cane on the property removed but said the Urbinas are allowing concertina wiring to stay on the property.

“All landowner agreements are voluntary and can be eliminated at any time. Again, DPS is there to assist the landowner,” Miller said in an email.

The chain-link fence, which rises over the cane intertwined with the razor wire, makes it easier for the Urbinas to pursue trespassing charges against people crossing into their farm. However, they haven’t, although they know cattle ranchers who have.

The state and federal governments are each “wanting to pull all the levers” and not working together, Hugo Urbina said. The couple regrets what they see as a disconnect.