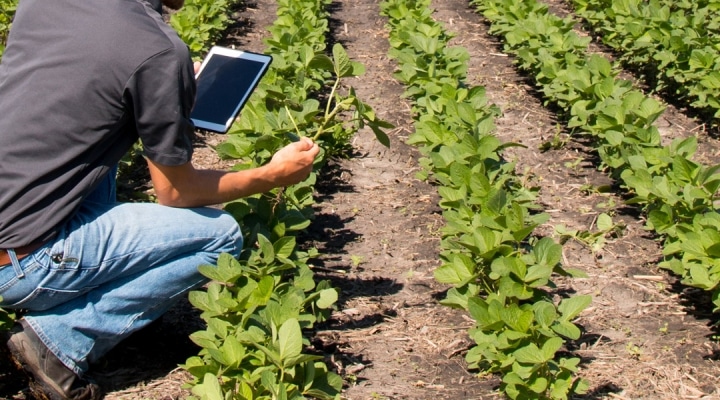 The lawsuit claims that four major manufacturers worked together with major wholesalers and retailers to deprive farmers of a free and open market in order to artificially inflate the price of of seeds, pesticides, herbicides, fertilizers and other agricultural products used in planting and raising crops. (Stock photo via United Soybean Board, Flickr/Creative Commons)

BOISE, Idaho (AP) — A group of farmers has filed an antitrust case against several big agricultural companies, contending the companies worked together to ban e-commerce sales in order to keep prices artificially high.

The farmers are seeking class-action status and they want a judge to force the companies to give up “unlawful profits” and pay compensation to those impacted by the high prices.

The Idaho farming operations — B & H Farming, Tyche Ag. LLC, Ceres Ag. LLC and Cedar Draw LLC, all based in Rupert — filed the lawsuit seeking class-action status on behalf of all farmers in similar situations in Idaho’s U.S. District Court last month. The lawsuit is similar to other federal lawsuits filed around the country.

The lawsuit claims that four major manufacturers worked together with major wholesalers and retailers to deprive farmers of a free and open market in order to artificially inflate the price of of seeds, pesticides, herbicides, fertilizers and other agricultural products used in planting and raising crops. The products are called “crop inputs,” because they are all materials used to start and keep the crop growing, rather than to harvest.

“Syngenta is dedicated to the support and success of our customers, and we will vigorously defend any allegations that our actions have been improper or illegal,” wrote Syngenta spokesman Saswato Das in an email to the AP.

Odessa P. Hines, an external affairs manager for the manufacturer BASF Agricultural Solutions North America, said BASF has been named in several such cases, and takes the allegations seriously.

“However, we deny that any of the allegations are indicative of anything other than a very competitive marketplace,” Hines wrote in an email to AP. “BASF is committed to fair competition and to providing farmers with access to the critical products they need to be successful.”

The Idaho farmers said the defendants worked together to create a secretive supply-chain process that effectively prevented farmers from comparison shopping and stopped other retailers from competing. The result, the lawsuit says, is that the cost of crop inputs dramatically outpaces yields, pushing some farms into bankruptcy. The farmers cite the price of seed corn, which rose by 300% over the last 20 years while corn yields increased by roughly 34%, according to the lawsuit.

“The cost of Crop Inputs is increasing at a significantly faster rate than profits from farmers’ crop yields,” the farmers’ attorney, Vaughn Fisher with the Boise law firm Fisher Hudson Shallat, wrote in the lawsuit. “These increases are proving increasingly devastating to farmers, who are now the least profitable level of the American food supply chain and are drowning in hundreds of billions of dollars of operating debt that is forcing them into bankruptcy at a record pace.”

Generally, farmers who want to buy common pesticides, fertilizers or genetically engineered seeds have to go through authorized wholesalers and retailers selected by the companies that make the products. The wholesalers and retailers are bound by confidentiality contracts, according to the lawsuit, and are also offered various incentives by the manufacturers to hit sales goals, sometimes by offering different prices in different regions. Sometimes, the farmers contend, seeds that have gone unsold for a time are relabeled under different brand names so they can be sold at a new, higher price. Often, seeds and farming chemicals are sold in bundles, making it difficult for farmers to determine what they’ve been charged for any individual product.

The farmers say the companies worked together to boycott e-commerce sales platforms that wanted to increase price transparency, like Farmers Business Network, which made its price and product database available to farmers so they could negotiate for better prices.

The farmers said it all amounted to a “scheme to defraud through anticompetitive conduct,” and that the behavior has caught the eye of government regulators. According to the lawsuit, the Federal Trade Commission, the U.S. Department of Justice and the Canada Competition Bureau have all launched investigations into the big companies’ actions.