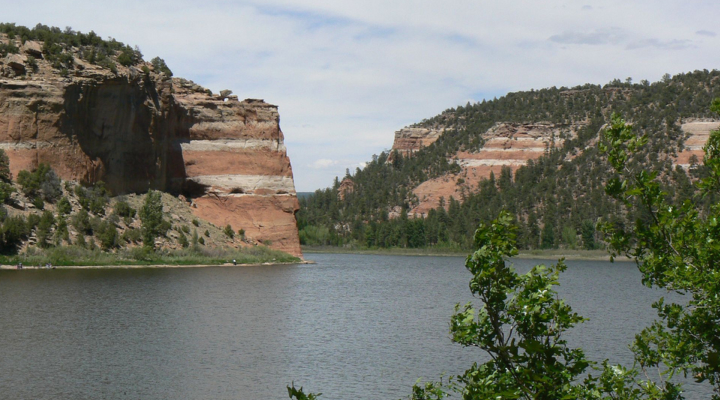 Extreme drought conditions caused Ramah Lake to dry out completely in 2014. The lake has made a surprising comeback, and while local farmers have been planting again this year, they are still skeptical about the future. (Ben Burkland Carolyn Cook, Flickr/Creative Commons)

RAMAH, N.M. (AP) — After church service Sunday in late February, Tucker Simons drove with his wife and their two baby daughters to Ramah Lake, and they were surprised to see water up to the boat ramps. “I got excited,” Simons, 33, a teacher at the Pine Hill Schools, said. “This is going to be a good year.”

His wife Jade Asher, who is originally from Spokane, Washington, told him she had never seen the lake that full since they got married and teased him, saying, “Oh, it does get water in it.”

The family then started planning summer activities, and for the first time in seven years, Simons started plowing his field along New Mexico Highway 53 in preparation for this year’s alfalfa and oat crops — which he is now irrigating with water from the lake. Ironically, he said, when he was a young boy growing up in Ramah, he did not like the work at the farm and preferred to spend the summers fishing at the lake. Now, farming has become his passion, but it’s still more of a side job, a hobby.

The unpredictable weather, drought, the high alkalinity in the mountain soil and the challenges of growing crops at more than 7,000 feet in elevation make it extremely difficult to earn a living with farming at Ramah and surrounding areas.

Extreme drought conditions caused Ramah Lake to dry out completely in 2014. The lake has made a surprising comeback, and while local farmers have been planting again this year, they are still skeptical about the future.

“You know, sometimes I think it’s kind of crazy,” Simons said about farming in Ramah.

“But, mostly, I think we are keeping our heritage. Grandpa put everything he had on this field. Of all my brothers and sisters, I was the one that hated chickens, horses and cows. Now I have chickens, geese and ducks. If the lake was full more consistently, we could do this full time. That’s something I would love.”

Could it be done full time?

Dean Bond, 79, is a rancher and farmer born and raised in Ramah.

When his son Kelly Bond saw photos of Ramah Lake on social media in early March, he called his father from Colorado to share his excitement. Dean Bond was not surprised because he had been driving to the snowmelt run off stream that feeds the lake several times in winter and knew the lake was coming back.

“With this magic little machine, my son called and said, ‘Hey, dad it looks like the lake has water,'” Dean Bond said, standing before his oat field in Ramah with a cellphone in hand. “You see, all this technology, that phone can’t raise that grain.”

Last fall, Dean Bond planted 300 acres of winterfeed pasture at his ranch on the mountains and another couple dozen acres of oats along N.M. 53 — a field he irrigates with water from Ramah Lake. Every year, he raises about 100-120 head of cattle.

“I tell my wife and my kids, in the last 10 years, if we didn’t have the big semi-trucks and (Navajo Agricultural Products Industry) farms in Farmington, we would’ve been outta here, because NAPI raises a lot of feed and we have trucks bring loads of hay,” he said. “We’ve been depending on big trucks to feed the cattle and horses. Without them, we would’ve been out of business because we would not have had anything to feed the cows.”

John Lewis, 58, was born and raised in Ramah. The owner of the Stagecoach Cafe on N.M. 53, Lewis also raises cattle, and this year he has 30 cows and has planted about 300 acres of rye and other grain to feed his cattle and horses. But his ranch is on dry land and he depends on “mother nature” to rain on his fields, he said.

“I usually have more cows. Right now things are kind of rough. We had a few years of drought and I didn’t want to overgraze,” Lewis said.

His property near the lake is not set up to irrigate with water from the lake, but he is in the process of setting it up.

“I think it is a good source,” he said. “The lake is only, in my opinion, probably filled by 40 percent capacity. It could probably hold another 50 percent if we got run off. I have seen it full. It was in the 1980s.”

As drought continues and winters get warmer, farming is declining and the lake is used for recreational purposes. More locals are spending their days kayaking at the lake or walking along the trails. Most local farmers grow small gardens or grow their produce in greenhouses and sell at the local farmers market.

Despite the challenges, Dean Bond is not discouraged. His grandson Benjamin Larson, 11, has been shadowing his grandfather, helping him care for the cattle and fields in the summer.

“My mom died when I was 3 years old,” Dean Bond said. “I rode behind my dad’s back on the back of a horse until I got big enough to ride a horse. I’ve been in the cattle business all my life. Here we cut the bail. We cut the hay to feed the cattle in the winter. In the last 20-30 years, the young people didn’t like hard work so they left to the city, they like computers. But now they want to come back … farming isn’t going anywhere. You have to eat something that a farmer, or a rancher or a hunter produce. We feed the world.”