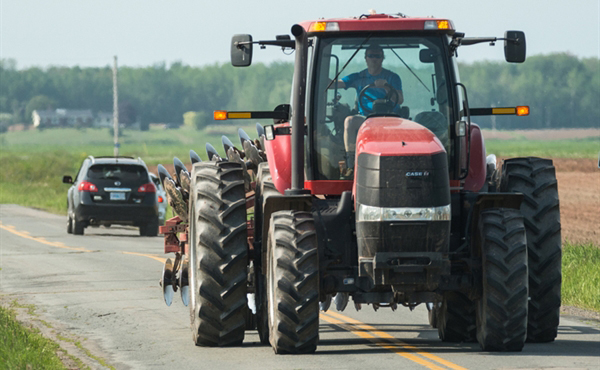 The average American is three generations removed from the farm, and that's creating a problem on Virginia's roadways. (Virginia Farm Bureau Federation)

WYTHEVILLE, Va. — The average American is three generations removed from the farm, and that’s creating a problem on Virginia’s roadways.

“Drivers today aren’t familiar with farm equipment, and when they approach it, they may not realize how large it is, how hard it is to pass it and how slow it travels,” explained Jonathan Grimes, a Wythe County farmer and educator. Grimes also chairs the Virginia Farm Bureau Federation Young Farmers farm safety subcommittee.

That group has been trying to find ways to educate drivers about what to do when they encounter farm equipment on the road. Each fall they sponsor a farm equipment safety display at the State Fair of Virginia that emphasizes how large farm equipment is compared to passenger vehicles.

Grimes said more farmers are renting or buying land wherever they can find it, and that often means they need to move equipment between locations. “You will see accidents with farm equipment all over the commonwealth, but there are more in higher-traffic areas.”

Glenn Dye of Stafford County farms in his home county as well as in Fauquier and Appomattox counties. Some of his farms are 145 miles apart, so he often travels with his farm equipment. “It is safer for me to haul equipment further distances on a trailer, but sometimes I drive my equipment on the roadways if it is a short distance,” he said.

Dye noted that most farm equipment won’t exceed 26 mph. He said sometimes it’s impossible to move over or out of the way, so he uses an escort vehicle when possible.

“People tend to discount the (flashing) lights, or get used to them or the emblems on the equipment, so having an escort vehicle adds another layer of safety and catches drivers’ attention,” he explained.

Dye added that one of the reasons he was drawn to Farm Bureau was to help promote farm safety.

“We can try to cram this message down everyone’s throats, but that’s not the message to send. I try to take an educational approach and let people see the equipment and understand why we can’t go faster and how to approach farm equipment,” he said.

Grimes added that it’s important for drivers to have patience. “No farmer wants to hold up traffic; we are just trying to do our job.”

He said drivers should use caution when passing equipment — even when it is safe to do so — because most farm equipment is wider than a typical travel lane and may be longer than it appears.