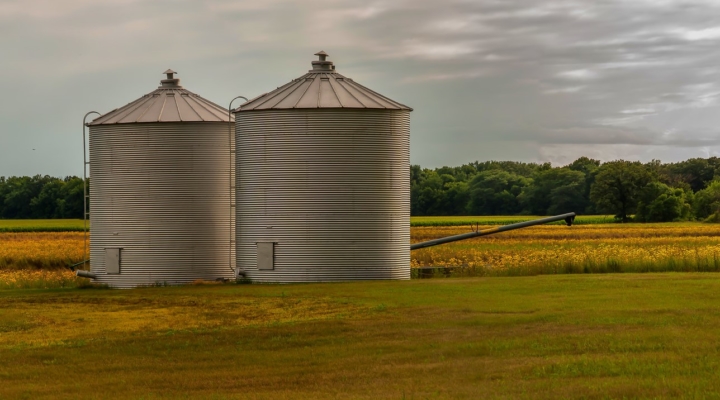 SASKATCHEWAN, Canada — Nothing says “Saskatchewan” quite like spending a night inside an old grain bin.

In recent years two families in the province have converted decommissioned round metal grain bins into unlikely accommodations, and opened their yards for visitors to stay.

Grain farmers April Anderson and her husband, Darryl, run Alive Sky Lodge, outside of Rosetown, Sask., about an hour’s drive from Saskatoon.

The property’s accommodations include Canada’s original four-season luxury grain bin, April Anderson says — they’ve dubbed it BINcredible and it is generally booked full from May through to August.

“We were trying to think of what we could build that would be quintessential prairie accommodation,” said Anderson.

The interior of their swanky grain bin features a vaulted ceiling with some of the bin’s original metal finish along the wall. It also has a bed, kitchenette, in-floor heat and fireplace.

She’s passionate about giving visitors an authentic farm experience, which is why they are insured to ride along on their family’s farm equipment.

They are also strong believers in promoting rural Saskatchewan through agri-tourism, and Anderson says the bin has sparked conversations with curious guests, some of whom hail from Europe and the United States.

Julie Hilling and her husband Dennis are retired grain farmers near Moose Jaw, Sask., who heard there was a lack of group camping in their area close to Buffalo Pound Provincial Park.

This past June, they opened the Bin There Campground after transforming six leftover grain bins into two-floor cabins with skylights and an old seed-cleaning plant into a hall.

Some of their bins are from the ’70s and ’80s, and at first it was a challenge to do the carpentry work inside because of their round shape, she said.

Hilling is surprised by their popularity and by how many people are looking for somewhere different to stay.

Both she and Anderson agree spending the night inside an old grain bin is a novelty for guests, but Anderson believes it means something more to locals.

“People want to reconnect with their roots,” she said, adding many of their Saskatchewan visitors are two or three generations removed from living on a farm, or haven’t been back to one since they were kids.

“It’s all of the great reminders of growing up for a lot of people: The dogs. The farmyard. Seeing the tractors drive through the yard.”

Woman who can't walk teams up with blind man for hiking adventures: 'He's the legs, I'm the eyes'

So many pets have been adopted during the pandemic that shelters are running out
January 11, 2021

So many pets have been adopted during the pandemic that shelters are running out
January 11, 2021

Horse, dog and pony are best friends and look like siblings thanks to spotted coats
January 7, 2021