Home / California / Farmer-Veteran grant helps Marine transition into beekeeping
A new user experience is coming! We'll be asking you to login to your Morning Ag Clips account March 1st to access these new features.
We can't wait to share them with you! Read more here. 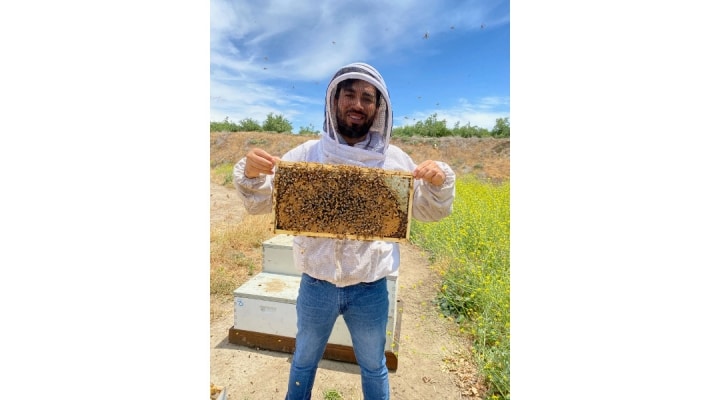 Jesus Toro displays a tray of his bees. (Courtesy Photo)

MADERA, Calif. — Jesus Toro is a man with a plan. The son of a farmworker and a former Marine helicopter mechanic, Toro’s goal is to become a fulltime beekeeper within three years, servicing orchards in California and the Pacific Northwest. A just-awarded Farmer Veteran Coalition grant – funded by Farm Credit – will be a big step toward achieving that goal.

The Coalition’s small grant program is designed to support veterans in their early years of farming and ranching by directly purchasing a piece of equipment the farmer has identified as being critical. In Toro’s case, that need was a trailer so he could haul his forklift to farms to unload and load his beehives during pollinating season.

“My goal is to have 1,000 hives within three years,” said Toro, a Madera native. “The hives will go on my flatbed truck, but I needed the trailer to haul around the forklift. The $5,000 grant made that happen.”

Keith Hesterberg, President and CEO of Fresno Madera Farm Credit, said grants like this one really make a difference.

“The Farmer Veteran Fellowship Fund provides direct assistance to veterans like Jesus Toro who are in their beginning years of farming and ranching,” Hesterberg said. “The funds are given directly to third-party vendors for items the veteran has identified will make a crucial difference in the success of their farm business.”

“Veterans receiving these grants need to have an agricultural business in operation and a business plan. In addition, they must provide progress reports and must be willing to mentor other farmer veterans,” Littlefield said. “Farm Credit is proud to be able to help individuals who have served in our armed forces build a new life in agriculture.”

This year, more than 100 farmer veterans across the country received grants. Over the 11 years the program has been in place, more than 700 veterans have benefitted, with $3.5 million in equipment distributed.

Toro said when his enlistment ended, he enrolled at Reedley College to study engineering, until he took calculus and physics in the same semester and decided perhaps engineering wasn’t for him. But a new career path was soon found.

“While at Reedley, one of my close friends told me that the bee business was going to be big in a few years because established beekeepers were getting old and there weren’t enough new guys stepping up to replace them. Then when I got to Fresno State, a beekeeping and biology class popped out at me,” he said.

In fact, Toro is featured in a 2019 You Tube video https://www.youtube.com/watch?v=p7iYB853WTo about the course in which he outlined his goal of establishing his own business.

After graduating with his degree in plant science, he’s currently working for an area fertilizer business and working with bees on the side. He now has 50 hives – each with up to 40,000 bees – and is looking to ramp up.

“The goal for me is to buy some land in southern Oregon and take the bees up there for honey production,” he said. “I also want to get contracts for almond pollination in California and for apple and cherry growers in the Northwest, which flower later than trees in California.”

And no doubt the trailer funded with the Farm Credit grant will put on many miles in the process.

Organic farmers warned against the use of certain pesticides