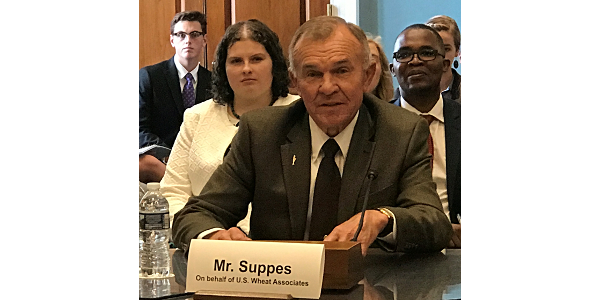 Ron Suppes, a Kansas wheat farmer and former U.S. Wheat Associates Chairman, testified in front of the House Agriculture Committee on the importance of food aid, discussing his recent trip to Tanzania where he viewed programs that used wheat. (Courtesy of Kansas Wheat)

MANHATTAN, Kan. — On June 7, Ron Suppes, a Kansas wheat farmer and former U.S. Wheat Associates Chairman, testified in front of the House Agriculture Committee on the importance of food aid, discussing his recent trip to Tanzania where he viewed programs that used wheat.

Suppes is a wheat farmer from Dighton, Kansas, and food aid is a topic that hits home to him. On his recent trip to Tanzania, Suppes gained more knowledge than ever about wheat food aid programs. He then decided to take his knowledge back to America to talk to farmers about the value these programs offer.

“More wheat is used in U.S. in-kind aid than any other commodity, averaging 40 percent of the total. It is also the most popular commodity for monetization,” said Suppes. “It is a versatile product and of key dietary importance-bread products are staples in diets around the world. Wheat is the source of 20 percent of the world’s caloric intake and provides 20 percent of protein for the world’s most vulnerable 4 billion people.”

The U.S. is the top leader of food aid donations and total development assistance. Suppes says the wheat he grows is “doing good half way around the world,” and feels that is something to be proud of.

“What the world likes about U.S. wheat is the quality as well as the consistency so they don’t have to change their mill settings. We’re the most reliable source of wheat in the world, and you go visit these customers we have and they’ll tell you that.”

Food aid continues to be a powerful tool used to help others in need.

Suppes said, “It helps generate goodwill in other countries, a sentiment I saw firsthand in Tanzania. But in the short-term, these programs also involve a significant amount of wheat, a fact not lost on Kansas farmers with full grain bins and more wheat piled on the ground from last year’s historically high harvest.”

“While these tools have a place in foreign assistance programs, U.S. commodities play an important role in helping regions unable to produce wheat and other commodities on their own due to drought, conflict or other circumstances,” he says. “We have enough surplus that no one should be going hungry.”

“In marketing year 2015/16, we sent almost 600,000 metric tons (MT), or about 22 million bushels of HRW as food aid. That makes up almost 10 percent of last year’s HRW exports and only Japan, Nigeria and Mexico imported more HRW,” Suppes says.

Suppes says a significant portion of these donations went to Ethiopia because their country was facing famine.

Suppes strongly believes that monetization is a strong tool that will provide necessary commodities to food-insecure areas and will benefit development programs by “generating funding from the sales of donated U.S. commodities.”

Not only does monetization benefit development programs, it can also give local small- and medium-sized buyers a competitive advantage because it is priced comparably to what a large buyer would pay.

During Suppes’ trip to Tanzania, he saw how the Hard Red Winter and Hard Red Spring wheat monetized there allowed the miller purchasing the wheat to pass along savings to their poorer customers. He also visited four of the projects funded by wheat monetization in the country.

When asked about the importance of food aid, Suppes replied, “I’m here because I think monetization is very important. In fact, I’m currently planting sorghum right now and my tractor is idle, so that’s how important I think it is. I need to be here to talk to you about it.”