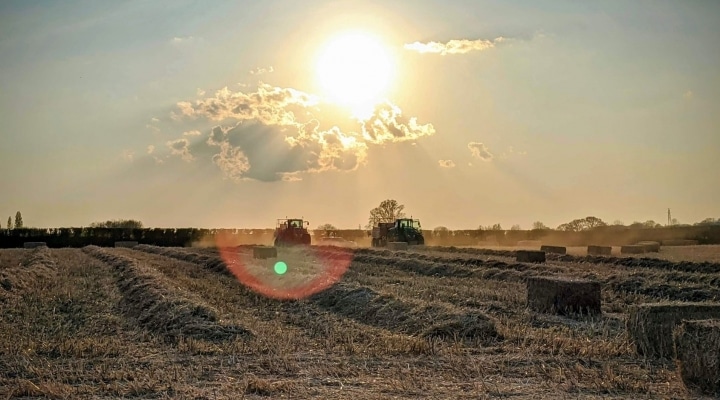 This month’s report includes insight into farmers’ intentions towards investing in farm machinery in the coming year and their thoughts on attending virtual events like field days and conferences this fall and winter. (Photo by John-Mark Strange on Unsplash)

WEST LAFAYETTE, Ind. and CHICAGO — There was a big improvement in farmer sentiment in August, according to the Purdue University/CME Group Ag Economy Barometer. The index rose to a reading of 144, up 26 points from July. The Ag Economy Barometer is based on survey responses from 400 U.S. agricultural producers and was conducted between August 17-21, 2020.

Increases in the barometer and its two sub-indices marked the most positive readings since February 2020 when record highs were established and before the pandemic began. The improvement in sentiment was also underpinned by expectations for excellent crop yields, as reported in the USDA’s August Crop Production report, and rallies in key agriculture commodity prices that took place this month.

“This month marked a considerable increase in farmer sentiment,” said James Mintert, the barometer’s principal investigator and director of Purdue University’s Center for Commercial Agriculture. “With a positive crop production outlook, rebounding commodity prices, and news of additional export sales to China, producers were much more optimistic about the future for the U.S. agricultural economy.”

Farmers were more optimistic about U.S. agriculture’s trade prospects compared to the past several months. In August, 67 percent of producers said they expect exports to rise over the next five years, compared to just 57 percent who felt the same way during the spring and summer months of 2020. Mintert attributed this change in perspective in part to rising export sales to China that began over the summer and now appear likely to continue into fall.

Farmers’ perspectives toward land values also improved in August. Those expecting land values to increase over the next 12 months rose to 20 percent in August, up from 16 percent in July and 7 percent back in April. The percentage of producers expecting values to increase in the next five years rose to 59 percent, up from 48 percent in July and just 40 percent who expected higher values back in May.

Each summer survey respondents are asked their opinion regarding changes in farmers’ equity position over the upcoming year. The percentage of respondents in the August 2020 survey who expect equity to decline in the upcoming 12 months was 38 percent. This marked the second lowest percentage since the survey question was first asked in 2016 and was well below a year earlier when 48 percent of respondents said they expected farmers’ equity to decline.

Read the full Ag Economy Barometer report at https://purdue.ag/agbarometer. This month’s report includes insight into farmers’ intentions towards investing in farm machinery in the coming year and their thoughts on attending virtual events like field days and conferences this fall and winter. The site also offers additional resources – such as past reports, charts and survey methodology – and a form to sign up for monthly barometer email updates and webinars.

Each month, the Purdue Center for Commercial Agriculture provides a short video analysis of the barometer results, available at https://purdue.ag/barometervideo, and for even more information, check out the Purdue Commercial AgCast podcast. It includes a detailed breakdown of each month’s barometer, in addition to a discussion of recent agricultural news that impacts farmers. Available now at https://purdue.ag/agcast.

Sponsors to be honored during 93rd National FFA Convention & Expo