Home / Illinois / Farmer sentiment jumps as harvest winds down
A new user experience is coming! We'll be asking you to login to your Morning Ag Clips account March 1st to access these new features.
We can't wait to share them with you! Read more here. 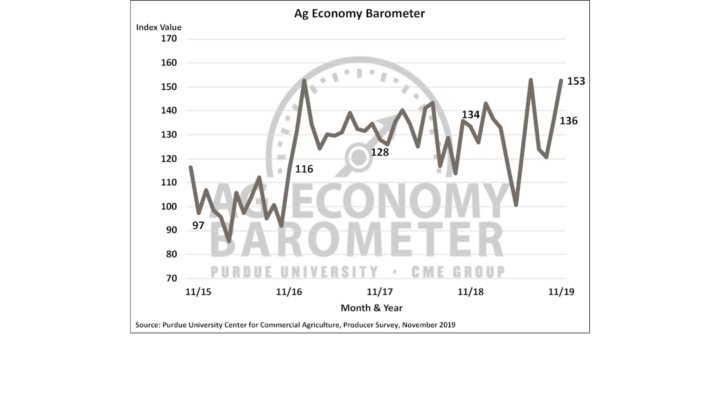 WEST LAFAYETTE, Ind. and CHICAGO – Agricultural economy sentiment tied with its highest reading of 2019, according to the November Purdue University/CME Group Ag Economy Barometer. Rising for a second month in a row, the barometer improved to a reading of 153 in November, up 17 points from October and matching the previous high set in July.

The Index of Current Conditions saw the biggest boost, soaring 38 points to a reading of 153 in November, while the Index of Future Expectations rose modestly, up 7 points to a reading of 153, as more producers believe that current and future economic conditions will continue to improve. The barometer is based on a mid-month survey of 400 U.S. crop and livestock producers.

“Except in the northern Corn Belt, farmers were wrapping up their fall harvest in November and yields were better than expected earlier this year, which helped boost sentiment along with news that the trade dispute might be settled soon.” said James Mintert, the barometer’s principal investigator and director of Purdue University’s Center for Commercial Agriculture. “Since early fall, cattle prices also rallied substantially, helping make both cattle ranchers and feeders feel better about their operations’ finances.”

Producers’ optimism about making farm capital investments also improved during November. The Farm Capital Investment Index rose to a reading of 71 in November, its highest reading since February 2018 and 12 points above October’s index value. This month’s rise in the investment index coincided with a sharp upward move in the Current Conditions Index, suggesting that, as producers’ perspective regarding their farm’s current situation improved, they were more favorably inclined toward making farm capital expenditures.

Read the full November Ag Economy Barometer report at https://purdue.ag/agbarometer. This month’s report also looks at producers’ views on farmland values at both 12-months and 5-years out. The site also offers additional resources – such as past reports, charts and survey methodology – and a form to sign up for monthly barometer email updates and webinars. Each month, the Purdue Center for Commercial Agricultural provides a short video analysis of the barometer results, available at https://purdue.ag/barometervideo.

For more articles about the agricultural economy, click here.