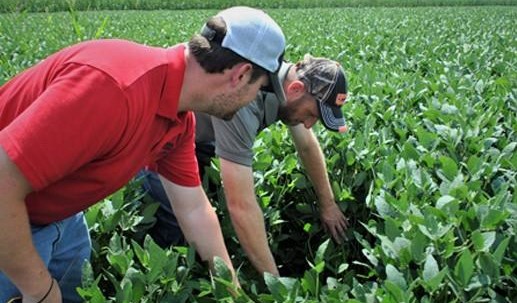 LINCOLN, Neb. — Farmers have been innovators and experimenters for millennia. They developed new types of crops and methods of farming.

Agronomic researchers – the scientists who study how our food is grown – have been working on their own fields. When they make new discoveries, they transfer the knowledge they’ve gained through workshops and publications to farmers.

A few decades ago, farmers and researchers began working together more closely. This “on-farm research” allows farmers a chance to work side-by-side with researchers. Collaborations like this allow for the testing of new agriculture products and methods in real-world conditions.

Laura Thompson and her team were interested to determine what motivated farmers to participate in on-farm research. So, their group at the University of Nebraska interviewed the 140 farmer-researchers in their network. The results, recently published in Agronomy Journal, can help future collaborations improve processes – and perhaps increase the number of farmers involved.

“Part of the goal was that we’d be able to document these experiences and motivations,” says Thompson. “The hope is that it will provide some guidance to others who are looking to start these programs.”

The Nebraska On-Farm Research Network started in 1990. Since then, participating farmers have taken a very active role. They conduct the research using their own equipment and resources. Conducting research on several farms allows for research in different environments versus a singular, university research station.

Farmers may also propose the research question. That was one of the motivators for participating. “We found that frequently their motivation was they wanted to find answers to a specific question,” says Thompson.

Research topics focus directly on what’s relevant to farmer-production questions. One example might be to compare the effects of two different fertilizers on crop production.

But, choosing the research question is often not solely the idea of the farmer or university educator. “We found that it was not so black and white usually,” says Thompson. “Choosing research projects was really collaborative.” Regardless of who came up with the question, the farmer’s overall satisfaction with the program was not affected.

Throughout the research process itself, Nebraska faculty provide technical expertise for running experiments. They also analyzed data collected by farmers.

Having this opportunity to work so closely with university faculty throughout the season, says Thompson, is another motivation for farmers’ participation in the program.

“One of my biggest take-aways was how much the farmers emphasized the relationships with people,” says Thompson. “When we asked about their experience in research and what made it positive, the dominant reason they gave was the interaction with university people and other farmers.”

This collaboration with the university also increased farmers’ confidence in the results. They viewed the results as trustworthy and unbiased, regardless if the results were what they hoped for, says Thomson.

After the season, farmers, university faculty, and industry professionals attend an annual meeting to discuss their discoveries. Attendees also include farmers who did not participate in the program itself, but are interested in learning the results from their peers.

“Farmers doing the research are sharing the results with other people, and they often cited the reason for doing so was a desire to help other farmers,” says Thompson. “So that’s really powerful.”

In addition to sharing their results with other farmers, farmer researchers also, for the most part, put their results into practice. Seventy-five percent of interviewees had put their research results into practice on their farm operation, either by making a change based on their results, or by not making a change as the research confirmed their current practice. And, they were noticing positive economic gain by doing so, says Thompson. The farmers interviewed expressed they had realized economic gains as a result of implementing their research findings. The farmers expressed this value as an amount saved (on average $15.43 per acre) or profit gained (on average $31.25 per acre).

When it comes to why farmers enjoyed participating in on-farm research, however, it’s rooted in the peer-learning aspect.

–American Soceity of Agronomy
via EurekAlert!