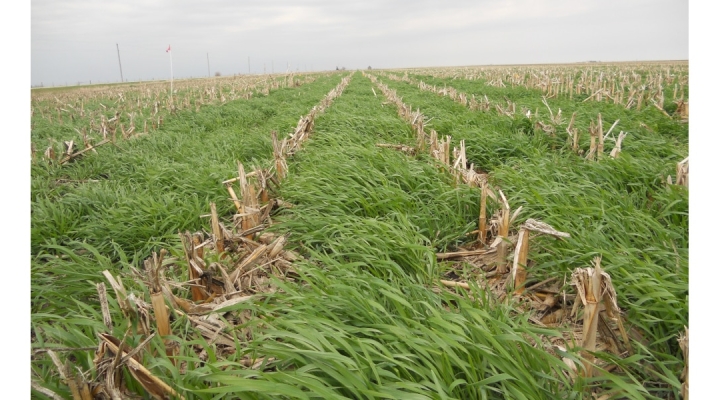 A recent report from the Iowa Farm and Rural Life Poll at Iowa State University indicates that a major nutrient management effort called the 4R Plus initiative is having a positive impact. The “Plus” component of the 4R Plus refers to highly effective conservation practices such as cover crops that complement best nutrient management practices and further reduce nutrient losses while retaining or improving soil. (Iowa State University Extension and Outreach)

AMES, Iowa — A recent report from the Iowa Farm and Rural Life Poll at Iowa State University indicates that a major nutrient management effort called the 4R Plus initiative is having a positive impact.

4R Plus, a science-based framework designed to guide improved nutrient management among farmers, is promoted by a coalition of more than 50 public and private agricultural stakeholders and non-governmental conservation organizations.

The approach is called 4R Plus because its core principles all start with the term “right”: the right source of fertilizers, applied at the right rate, at the right time and in the right place. In other words, the 4Rs promote recommended nutrient management best practices for any given farming context. The “Plus” component of the 4R Plus refers to highly effective conservation practices such as cover crops that complement best nutrient management practices and further reduce nutrient losses while retaining or improving soil. The 4R Plus framework is promoted as a win-win approach that can minimize farming’s impacts on water quality while maintaining or improving productivity.

“The Farm Poll survey is an important tool for helping agricultural stakeholders to better understand the farmers they work with, so they can meet them where they are,” said Iowa State University Extension and Outreach sociologist J. Arbuckle, director of the annual survey of Iowa farmers. “For the 2021 survey, I worked with The Nature Conservancy, a key partner in the Iowa 4R Plus initiative, to develop survey questions that would gauge farmer awareness of the 4R Plus program and their perspectives on how well it’s working.”

Most farmers know about 4R Plus

The survey showed that about two-thirds of respondents were aware of the 4R Plus program, and had learned about it through diverse information sources such as the farm press, ISU Extension and Outreach and agricultural retailers. More importantly, many farmers reported using one or more of the main practices that 4R Plus promotes.

“We used a new kind of question to examine adoption or potential adoption of practices, one that determines how many farmers are using the practices, but also how many non-users are open to future use,” explained Arbuckle. “The survey showed that while overall farmer use of 4R Plus practices is far below where we need to be to meet the state’s soil health and water quality goals, many of the farmers who aren’t using the practices now either intend to try them soon or are at least open to the idea of future use.” Arbuckle further noted this means there is lots of room for progress. For example, about one-fifth of farmers who were not using cover crops intended to try them in the next three years and another 25% were not planning to use them but might in the future.

“The farmers who are planning to try practices or open to future use represent the next waves of adopters,” said Paige Frautschy, Iowa agriculture program director for The Nature Conservancy, who partnered on the survey design. “This information helps us understand what kind of progress we’re making, and which practices are of greatest interest to that next wave of adopters. Knowing that so many farmers may be ready to give 4R Plus practices a try is energizing for the many groups that are working toward the goals of the Iowa Nutrient Reduction Strategy.”

More than half of practice users reported that the practices they had adopted had resulted in positive impacts on soil health indicators and key agronomic outcomes including soil organic matter, water holding capacity and crop yields. Similarly, 48% believed the practices had reduced nutrient loss, 33% indicated that fertilizer needs were reduced and 29% reported reduced weed pressure.

“These findings that farmers are experiencing positive impacts helps make the case that 4R Plus practices make sense both environmentally and economically,” noted Frautschy.

Farmers and other stakeholders who would like to learn more about the 4R Plus initiative and access resources available through the program can visit 4RPlus.org.

Known also as the “Farm Poll,” the Iowa Farm and Rural Life Poll has been conducted since 1982, and is the longest-running survey of its kind in the nation. Questionnaires were mailed in February and March 2021, and 1,095 farmers responded to the statewide survey.

Other topics covered in the 2021 Farm Poll summary include community vitality, the impacts of COVID-19, renewable energy, carbon markets and use of various media for information and entertainment.