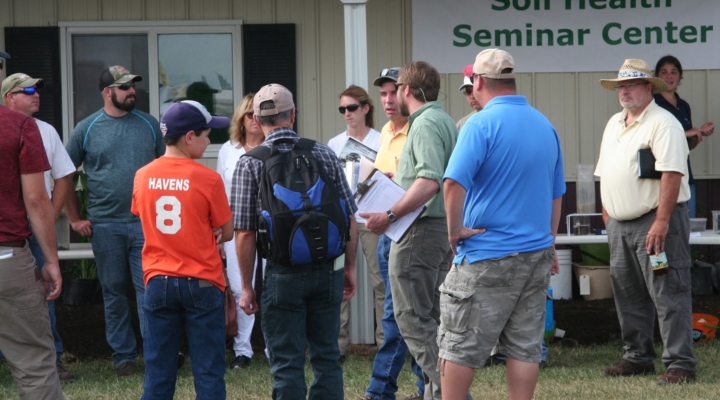 SENECA FALLS, N.Y. — Planting green, nutrient management in no-till systems, and soil health management in vegetable production are among the practices that will be shared by the eight farmers tapped for Soil Health Center panel presentations at the 2019 Empire Farm Days. The agricultural and rural living event will be held August 6-8 at Rodman Lott and Son Farms in Seneca Falls, N.Y. A farmer panel begins at 11 am daily following the day’s keynote speaker.

John Kemmeren was one of the first farmers in his region to experiment with no-till back in 1975 and he has been planting no-till ever since. John incorporates cover crops into his rotation whenever possible to combat erosion and feed the soil. His integrated farming practices have allowed him to reduce costs and improve soil health.

Dave Magos farms 2,200 acres of cropland at his Morning Star Farm. He grows corn silage and alfalfa for his 780-cow dairy herd and corn grain and soybeans as cash crops. He began planting cover crops in 2007 and about the same time decided to try no-till. He is now 100 percent no-till. He has experimented with diversified cover crop mixes and many no-till corn planter attachments.

Jay Swede farms 4,500 acres of cropland with his father and brother at the Gary Swede Family Farm, Pavilion, NY. The Swedes grow corn (sweet, silage and grain), soybeans, winter wheat, alfalfa, and vegetables. The family has won several national corn yield contests. The Swedes currently strip-till all of their acreage, but are actively interested in transitioning some acres to no-till. Jay is a leader in the precision agriculture world and co-founder of the Advanced Ag Alliance that works to advance precision agriculture, including precision nutrient management in New York and beyond.

Donn Branton farms 1,500 acres with his son Chad. They grow a variety of cash crops, including corn, soybean, alfalfa, peas, sweet corn, lima beans, dry beans, wheat, oats, and rye. Donn is a tireless advocate and innovator of reduced tillage and cover cropping practices to improve soil health, and the current president of the Western New York Soil Health Alliance, a farmer-led organization working to promote soil health practices and to serve as a collective voice for farmers in Western New York. He started experimenting with planting green before there was a name for it in 2005. Recently, Donn and Chad created the Big Daddy Cover Crops website to share information and insights from their various cover crop practices including cover crop mixtures, interseeding, planting green. etc.

Jim Hershey, with his wife Shirl, son Marc and daughter-in-law Crystal, owns and operates a 500-acre crop and livestock farm in Lancaster County, PA. The operation includes organic certified broiler chickens, a swine wean-to-finish facility, a crop management service, and the Harvest View Barn Wedding venue. Crops include corn, wheat, and soybeans, all managed in a no-till/cover crop environment, maintaining living cover year’round. Jim has been planting into green living cover for more than 7 years and has seen a significant improvement in the soil’s ability to handle drought and excessive wet conditions. He has been cover crop interseeding for 6 years and now markets interseeders commercially. Jim is President of the Pennsylvania No-Till Alliance and frequently speaks to farmers and agribusiness across PA and surrounding states promoting no-till, cover crops & soil health.

John Macauley manages 1,200 acres at Macauley Farms LLC in Livingston County, NY, with his father Jim and brother Jeff. The Macauleys primarily grow corn grain, soybeans, and winter wheat, but also raise 100 beef cows. In 2009, they began transition away from conventional tillage by first experimenting with both strip tillage and no-till planting. Today, they practice no-till on 100% of their acres and integrate diverse cover crop mixtures where possible to build soil health and reduce runoff. They have been experimenting with planting green for five years.

Andy Fellenz started Fellenz Family Farm in 2002, growing a diverse range of organic vegetables to sell through a CSA, farmers’ markets, and other channels. Andy has been an active champion and educator for organic and soil health practices. He recently transferred management of the 45-acre organic vegetable, herb, and fruit farm to his son Erik and Erik’s partner Jenny. The farm uses a mix of cover crops, compost, and fertilizer to maintain soil fertility. Compost, peat, and mulches are used to build and maintain good soil tilth.

Have you considered getting your maple syrup tested?

Free gardening class at the Newburgh Armory Unity Center
May 19, 2022