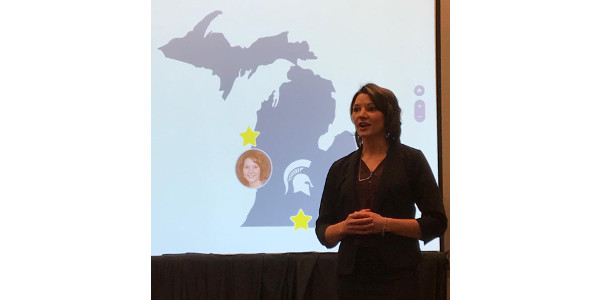 After months of refinement and winning the state-level competition, Mason County agricultural power couple Seth and Lyndsay Earl finally made their case on the national stage in the AFBF Young Farmer & Rancher Excellence in Agriculture contest, underway at the organization’s annual meeting in Phoenix, Ariz. (Michigan Farm Bureau via Facebook)

LANSING — A contingent of more than 100 agriculture industry leaders will represent Michigan’s farming community at the 98th annual meeting of the American Farm Bureau Federation (AFBF), Jan. 6-11 in Phoenix, Ariz. Attendees will include Michigan Farm Bureau (MFB) leaders, select county Farm Bureau presidents and staff members, half a dozen Young Farmer contestants and several rank-and-file farmers from across the state.

Together with similar groups from other states, an estimated 7,000 farm and ranch leaders from across the nation will convene in the desert southwest to define the national farm organization’s 2017 agenda. Michigan will be represented by 11 voting delegates and six alternates, who together comprise the MFB board of directors. (See list below.)

More than 360 farmer delegates representing the Farm Bureaus of 50 states and Puerto Rico will adopt farmer-written resolutions to set AFBF’s official policy positions for 2017 during the convention’s business session.

Three key issues are near the top of the Michigan delegation’s priorities:

Farm Bill — Federal-level farm policy is a top concern nationwide, even with the current farm bill only half-way through its lifespan. Signed into law by President Obama at Michigan State University, the 2014 Farm Bill made notable forward strides in expanding risk-management options for Michigan’s specialty crop producers.

MFB hopes the next farm bill will refine and strengthen the dairy industry’s safety net.

“One facet of particular interest to Michigan is dairy’s margin protection program. It’s meant to help dairy farmers weather challenging financial times—like they’re seeing right now, actually—but the way it’s currently designed, too few farmers across the country have been able to utilize it, largely because it doesn’t account well enough the variability of feed prices.”

Farm Machinery — Farmers in Michigan and nationwide are concerned about what they’re calling the “right to repair”—referring to the widening gaps between increasingly technical equipment and the humans operating it.

“As farm equipment has become more sophisticated, it’s become harder and harder for farmers to repair themselves—a tradition so deeply ingrained in farmers that the prospect of losing it really hits a nerve,” Kran said.

He added that Michigan farmers are concerned about fewer options for repairing their own equipment, as well as third-party access to the proprietary and farm-specific information that accumulates in onboard computers.

Cover Crops — Michigan’s delegation in Phoenix is expected to champion revisions to AFBF’s agricultural conservation policy as it regards incentivizing the implementation of cover crops—planted to help protect soil and water resources.

“We support making cover crop incentives available to all farmers,” Kran said. “That includes improving access to cost-share programs that help farmers in areas where cover crops prevent the most sediment or nutrient loss. We feel cover crop utilization is a critical component of conservation practices and should be incentivized wherever they’re effective in maximizing conservation efforts.”

Three outstanding young farmers from Michigan will face off against peers from across the country in contests held Jan. 9-11.

Ionia County dairy farmer Josh First will vie for AFBF’s Young Farmer Achievement Award, which recognizes successful young members for outstanding achievement in the business of farming and leadership in the agricultural community. Applicants are judged on their farm management ability and involvement in Farm Bureau and other organizations.

Seth and Lyndsay Earl of Mason County will compete for AFBF’s Excellence in Agriculture Award, which honors young farmers who do not derive the majority of their income from a personally owned agricultural operation but who actively contribute to and grow through their involvement in Farm Bureau and agriculture.