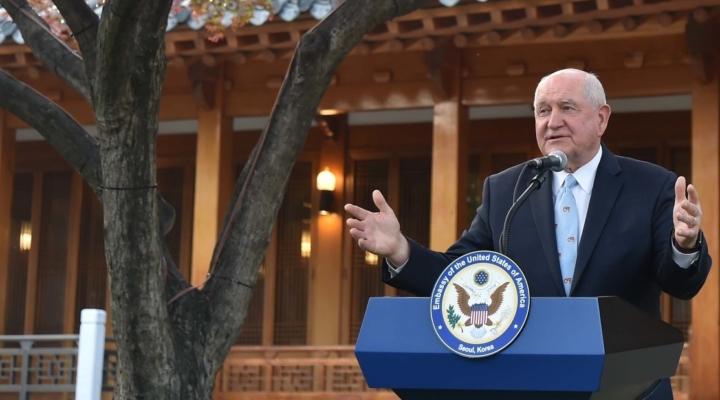 Agriculture Secretary Sonny Perdue expressed hope that a trade deal with China will still be worked out and predicted that farmers will not be harmed in the long term. (U.S. Department of Agriculture, Public Domain)

WASHINGTON (AP) — Agriculture Secretary Sonny Perdue said Wednesday his agency is still “in the throes of constructing” an aid package for farmers hurt by retaliatory tariffs, but he is not prepared to say when it will be ready.

Perdue said the Agriculture Department is reviewing feedback from producers about the strengths and weaknesses of last year’s relief package, valued at up to $12 billion. This year’s package could range between $15 billion and $20 billion, Perdue projected.

He also predicted that the relief amount will be enough to offset losses that farmers are facing as a result of lower prices due in part to retaliatory tariffs.

President Donald Trump tasked Perdue with putting together another aid package for farmers after talks with China deteriorated in recent weeks. The Trump administration responded by more than doubling tariffs on $200 billion in Chinese imports and spelled out plans to target the $300 billion worth that aren’t already facing 25% taxes.

China retaliated with tariffs on $60 billion in U.S. imports. China and other countries hit by U.S. tariffs have largely targeted American agriculture in response to Trump’s tariffs.

Perdue, speaking to reporters by telephone from South Korea, said Trump has asked that the relief package for farmers be expedited. He said it would likely include features from last year, including direct payments to farmers based on their production.

Some commodities fared better than others and are lobbying for changes. The National Corn Growers Association said last year’s program gave corn farmers 1 cent per bushel. “A penny didn’t cut it then and won’t cut it now,” the group said Wednesday.

Perdue expressed hope that a trade deal with China will still be worked out and predicted that farmers will not be harmed in the long term.

He said the department is still reviewing responses to a program he believed worked well last year.

“We’ll try to learn from it and improve from it,” Perdue said.