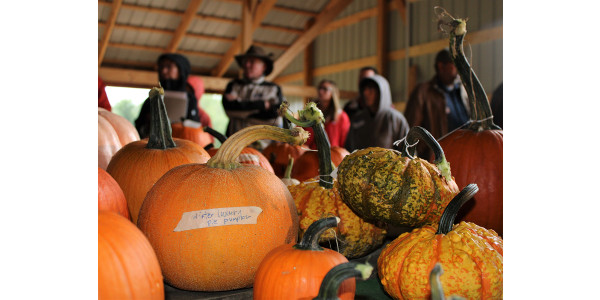 "The pumpkin research we had to work with before was from states like Indiana," says Annie Klodd, an Extension horticulture educator funded by AGREETT. Klodd is completing a 32-variety pumpkin variety trial with retired Extension educator and farmer Rod Elmstrand in North Branch, Minn. Results will be published in early 2020. (Courtesy of University of Minnesota)

MINNEAPOLIS — Growing fruits and vegetables is how many new and younger farmers get started farming. But gaining the knowledge can be tough for growers of a crop like pumpkins, for which there have never been research trials in Minnesota. Until now.

“The pumpkin research we had to work with before was from states like Indiana,” says Annie Klodd, an Extension horticulture educator funded by AGREETT. Klodd is completing a 32-variety pumpkin variety trial with retired Extension educator and farmer Rod Elmstrand in North Branch, Minn. Results will be published in early 2020.

One of Klodd’s early favorite pumpkins was called SPU-3269 when it was planted. It performed reliably and beautifully across four research plots. The breeder has since named it Spartacus.

Warty Gnome was another favorite, producing approximately five pumpkins per plant. “Not everyone likes the warty pumpkins,” says Klodd, “but they give a lot of pop to an autumn display alongside classics like Magic Lantern, another heavy producer with great color and shape.”

Read The scoop on pumpkins: 5 fun fall facts for more about the variety trials and to get pumpkin tips.

Fruitful futures for wine and cider

Raised on an Iowa farm and vineyard, Klodd brings lifelong expertise to grape growers. The grape-growing landscape is expanding in Minnesota, and it’s no longer a surprise to see trellises of fruiting vines.

“A lot of growers are just on their own, trying to learn the best way they can, through other growers,” says Lisa Smiley, executive director of the Southern Minnesota Grape Grower Alliance. “Annie’s been kind of the missing link that the industry needs.”

Orchardists and cider makers ask the University which varieties to grow in Minnesota for hard cider. To answer that question, Extension and the University’s fruit breeding program are collaborating with seven orchards throughout the state.

One of them is Keepsake Cidery in Dundas, Minn. Nate Watters planted his apples there in 2014 after a few years of growing vegetables. He remembers the moment when he found himself thinning carrots on his hands and knees that he realized apples would be a better fit with his personality. “It’s a fit with our culture here too,” he says. “We have such an affinity for our apples. But we don’t have to do it just like they do in Normandy or other places famous for cider. We want to develop our own flavor here.”

Much of the cider in Minnesota is made from the University’s Minnesota Hardy varieties, such as Haralson and Honeycrisp. Which cider characteristics these apples have is one question since they were developed for eating, not drinking. That leads to the question of how reliably Old World European varieties survive and produce here.

“We are working together with the orchards to evaluate yield, winter injury, and tree growth,” says Klodd. “We will then make cider from each variety and test it for juice and sensory qualities, like acidity and flavor.”

Podcasting to fruit and vegetable growers

Whether a grower’s problem is an apple disease or an insect sucking the life out of their broccoli, Klodd and Natalie Hoidal, another AGREETT-funded Extension horticulture educator, address it through their Extension podcast called “What’s Killing My Kale?”

Fruit and vegetable growers work in complex systems and feed a lot of people. It can be challenging, especially for organic growers.

“We anticipate that an insect called the Swede midge may move beyond gardens to vegetable farms in the near future, so it’s important for growers to be on the lookout, and to have some background in current research and management strategies,” says Hoidal. There isn’t always an easy answer, but a recent episode of the podcast featured guests who have experience with the Swede midge.

Are your dry cows getting the nutrition they need?
February 23, 2020