Subscribe
Home / Colorado / Farm teams will SLOW DOWN the action 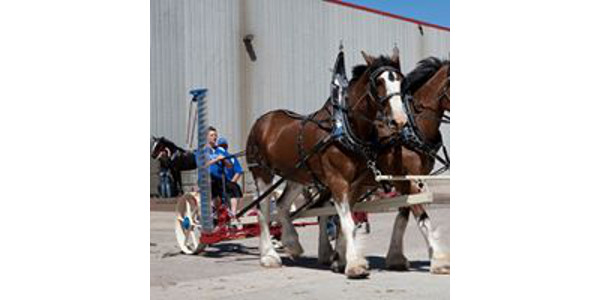 BROOKINGS, S.D. — After 10+ top Six Horse Hitches from across the US demonstrate their ‘full trot action’ in the indoor show ring at the 1pm Dakota Royal Charity Draft Horse Show June 23 & 24 in Brookings, SD, you just might need to SLOW DOWN a bit. And the show’s class schedule has exactly that planned for the audience.

By competing in two classes, local Farm Teams will provide a chance for all to recall ‘yester year’ and reflect on how these work horses helped to build the Midwest, one task, and one crop, at a time for many rural families.

Each day at the Dakota Royal Charity Draft Horse Show the farm teams will compete in the timed Feed Race to showcase the teamsters’ ability to preform under pressure, while demonstrating a ‘hands on’ farm chore task that years ago, and even today, is a necessary chore in many agriculture operations. Communication between the driver to the variety of breeds of teams entered, and a strong helper to complete the task will be the key to earning a top placing in this timed event.

Later in the show, in the Farm Team class, a variety of antique farm equipment and wagons will be driven around the ring, sparking audience memories such as: ‘remember back then’ when teams of horses & such machinery were common? Or ‘oh gosh grandpa had a planter and a mower just like that’! And if a manure spreader enters the ring…memories of cleaning stalls, pitching manure and other such smelly barn tasks will allow all to ‘chuckle’ at their memories of hard work!

The early entries from local teamsters with various equines at the June 23 & 24, 2018 Dakota Royal Charity Draft Horse Show include:

Mike Olson, White, SD, driving a team of Belgians; Mike Strohfus, Volga SD, with his Percheron Morgan cross team; Nicki Fuller, Clark, SD, with her Clydesdale team, and Clayton Moen, Sisseton SD, with his Percheron Morgan cross team. Rounding out the farm team early entries, and sure to provide much entertainment, is a team of mules driven by Bruce Prins, Sisseton, SD, and a new 2018 entry with a team of Fjords driven by Jeff Blankenfeld, Aurora, SD. Get ready to view a lot of historic action in the indoor Swiftel show ring at the Dakota Royal Charity Draft Horse Show as additional farm teams may be exhibiting at the Brookings, SD, show, once information is confirmed.

To ensure that the elders can share their Draft Horse memories with other generations attending the show, the Swiftel Center doors open @ 11am Saturday & Sunday so all ages can visit the gentle giant six horse hitches, farm teams, their crews & many vendors BEFORE the show! NOTE!!–This SD show is unique by starting with the six horse hitch competition at 1pm daily, as its first class, so don’t be late! And after such full trot action, yes, the farm teams will ‘slow it down’ in the ring…and memories will fill the Swiftel Center, one hoof beat at a time!

Tickets will be available at the Swiftel Center in Brookings, SD, or at the door the day of the show. Admission is $10 adults & $5 for 11 & under. With free parking, AC comfort, stadium seating and an elevator, a multi generation family afternoon is easy. Learn more about the show, horses and crews traveling in June to Brookings, SD from across the US via the facebook page “Dakota Royal Charity Draft Horse Show.”… https://www.facebook.com/dakotaroyaldraftshow/ Contact drcdhs@yahoo.com for more info. Make your June 23 & 24 family weekend plans NOW!