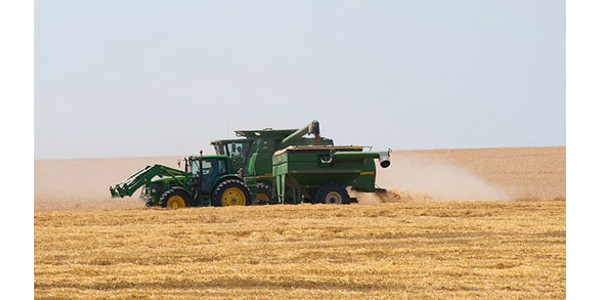 Kansas State University agricultural economists Greg Ibendahl and Terry Griffin have reviewed factors that contribute to a successful farm in Kansas, and determined that the size of the farm doesn't really matter. (Courtesy of K-State Research and Extension)

MANHATTAN, Kan. — A pair of Kansas State University agricultural economists have taken a look at the characteristics that make farms successful in Kansas, and have found that bigger doesn’t always mean better.

Greg Ibendahl and Terry Griffin reviewed 10 years of data from the Kansas Farm Management Association to develop a ranking of several hundred farms based on their economic performance.

KFMA is a program offered through K-State’s Department of Agricultural Economics that provides production and financial management information to farm families in the state.

“Based on the farm sizes that we have in our KFMA database, there really is no advantage to being a bigger farm,” Ibendahl said. “I expected the bigger farms to be more efficient because they have the ability to buy inputs at lower prices and because they may have better marketing opportunities.”

Ibendahl noted that the K-State analysis has not yet looked at all potential factors of profitability, “but the surprising thing I’ve seen so far is that once you get to a certain size, there may not be an advantage to getting any bigger than that.”

“The higher your debt level was, the lower you tended to rank,” Ibendahl said. “To me, when you relate that back to farm size, I don’t think farmers should be looking at the fact that they need to expand aggressively because if you’re already at a certain size, just getting bigger is not going to help you, but adding more debt is going to be more detrimental to your net farm income.

“I think it’s more important to keep your debt in check. We’re seeing this even with interest rates kind of low. If there was a situation where we had higher interest rates, I think that debt thing would stick out even more than what it does.”

Griffin said the analysis considered the influence of five factors to profitability: farm size; level of debt; investment in machinery; machinery operation and maintenance costs; and the allocation of acres to given crops.

“The takeaway here is that it’s a good, quick benchmarking for growers to see how they compare and hopefully they will realize that they are not different from average and above average farms.”

The full analysis as well as other fact sheets related to characteristics of successful farms is available from K-State online at www.agmanager.info. Griffin said some of the information they’ve been providing dates back several months.

“There is a lot of stress right now, and stress is caused by low commodity prices,” Griffin said. “The weather in 2019 is not what anyone anticipated, and so there are lots of different stresses out there.

“One of the things that I’m trying to get across to producers that I’m talking with is that this study allows you to compare yourself to the majority. A lot of farms were putting more pressure on themselves than they needed to; they thought they were being outliers or their ratios weren’t where they should be. This allows them to get a clearer sense of where they stand.”

“By looking at a 10-year horizon,” Ibendahl added, “and keeping the same farms in there the entire time… it made a fair comparison.

“If you were consistently a good farmer and ranking in the top five or ten percent of the rankings every year, that probably says you are doing something better than your competing farmers, and the same thing on the low end.”

In another surprise finding, the economists noted that farmers who had higher investments in machinery were ranked as more profitable farms in the long haul.

“Normally you would think extra machinery would be a drag on profitability, but it’s really not,” Ibendahl said. “I think farmers are using machinery as a cash flow tool, so that when they do have good years, they tend to take those extra profits and invest in more machinery as a way to hold down their taxes.”

Griffin added: “If we dig into it, we probably would find out that farms that had more invested in machinery might be more efficient, might be able to plant and harvest more timely. But we have not tested the hypothesis of whether more profitable farmers are investing more in machinery, or did the investment in machinery lead to more profitability.”

Learn more about KFMA and its services online.