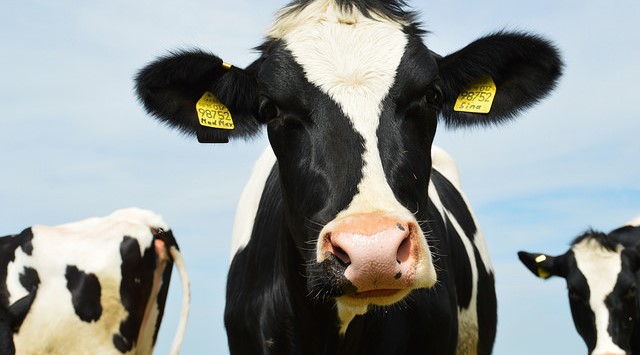 After a challenging year, Sue Tiffany said she is hoping for a better year. She said farming is a way of life and she wants people to know that while the dairy herd is gone, the family is working to keep the farm going. (Tobias Nordhausen, Flickr/Creative Commons)

But the farm, a long-running dairy operation and fixture of the Lyme landscape, has undergone a change within the past year. Amid financial pressures on dairy farms, Tiffany Farms has sold its dairy cows and now plans to focus on raising beef cattle and selling hay.

The Tiffany Family has owned the approximately 140-acre farm since the 1840s, according to The Day’s archives.

Leon Tiffany began milking 28 cows of a variety of breeds in 1941, including Guernsey cows, and the farm later exclusively milked Holsteins due to a demand for low-fat milk, author and photographer Judy Friday wrote in the 2003 book, “A Year at Tiffany Farms.”

In the 1940s, many more dairy farms were in existence, said Sue Tiffany, who was married for 51 years to John J. Tiffany II, “Jack,” longtime dairy farmer, state legislator, and advocate for farms, who died in January.

Financial pressures on dairy farms gradually increased over the years, and last September, Tiffany Farms sold 65 milking cows and 40 heifers to a buyer from Canada, she said.

“The most enormous trucks you’ve ever seen came in at night, and we had a lot of people on hand to help load them,” she said in a recent interview. “It was very sad.”

In the 1970s when Sue took over the farm’s bookkeeping from Jack’s mother and father, Gwendolyn and Leon Tiffany, she was able to put aside money from the milk check in a savings account.

“While I used to be able to save a substantial amount of the milk check every month, I have not been able to do that in probably 30 years,” she said.

The price of milk, a federally established figure, hasn’t kept pace over the years with the rising costs associated with producing milk, including costs for insurance, workmen’s compensation, payroll and supplemental grain, she said.

“The cost of making the milk quadrupled and the milk prices didn’t do anything,” she said. “There’s a glut of milk.”

Unlike many large farms in the west where there is a lot of contiguous land, Tiffany Farms, in the Northeast, didn’t have room to expand.

“We had a barn out back to house the cows,” she said. “We could only house a maximum of 80 milking cows, and it would have been impossible to expand at all, and I think that is true for a lot of farmers.”

The number of dairy farms in Connecticut dropped from about 500 in 1992 to about 150 in 2012, according to data from the U.S. Department of Agriculture’s National Agriculture Statistics Service cited in a presentation by Rigoberto A. Lopez, the director of the Zwick Center for Food & Resource Policy and the head of Agricultural & Resource Economics at the University of Connecticut.

“Some farms try to increase prices by tapping into consumers’ willingness to pay for local milk or milk products and others by expanding their scale and increasing efficiency,” Lopez wrote in an email. “But recent declines in prices are putting even greater pressure on many state and regional farmers as well. After some period of stability, the number of dairy farms have decreased to about 100 but the level of milk production has remained about the same as surviving farms have increased in size.”

Recently, Brookfield Farm in Durham sold its dairy cows and Blue Slope Farm in Franklin sold most of its dairy cows, the Hartford Courant reported in articles on the struggles facing the dairy farm industry.

“This is an extremely difficult time not only specifically for Connecticut dairy farms, but across the country, as well,” Don Tuller, president of the Connecticut Farm Bureau, said in a phone interview.

The price of milk is below input costs for farmers, he said, and, farms are trying to expand the type of products they sell to compensate. Production costs are also higher in Connecticut, including those for electricity and grain transportation.

A new chapter for Tiffany Farms

Tiffany Farms faced another challenge when on Nov. 8, 2017, the farm’s 80-foot-tall silo, three quarters full with corn, collapsed and squished the nearby milking facility and barn, Sue Tiffany said.

“Fortunately, no one was hurt,” she said.

No animals were in the milking facility as they had all been sold. With family members pitching in, they salvaged much of the silage and cleaned up the farm.

After a challenging year, Sue Tiffany said she is hoping for a better year. She said farming is a way of life and she wants people to know that while the dairy herd is gone, the family is working to keep the farm going.

After Jack Tiffany died this winter, the farm was turned over to his wife and his son, John, who is running it with plans to raise beef cattle and sell hay. They also have a part-time worker at the farm, which they had to scale back from full-time.

Sue Tiffany said John is doing a good job and is a “jack of all trades,” between baling hay, doing carpentry work and fixing broken machinery.

They have sold several wagons of hay to a local farm, and people come to the farm to pick up bales of hay, she said. The farm is also looking for more buyers for the hay.

“Every little bit helps,” she added.

She also said the farm’s supplemental income, from a cell tower arrangement with AT&T and Verizon and a house the farm rents out, helps.

With the dairy herd gone, Sue Tiffany, who used to feed the calves twice a day, said there is less work on the farm and she has more free time. While she misses looking out the window and seeing all the dairy cows, she said the Lyme landscape is so peaceful and the beef cows are still visible.

The Tiffanys had sold to the state the development rights to the farm in the 1990s, which she said is nice because the farmland serves as a local landmark.

“Jack always would say: ‘It’s the town green. It’s the landmark that people identify when they come into Lyme,'” she said.

Information from: The Day, http://www.theday.com

–By KIMBERLY DRELICH , The Day