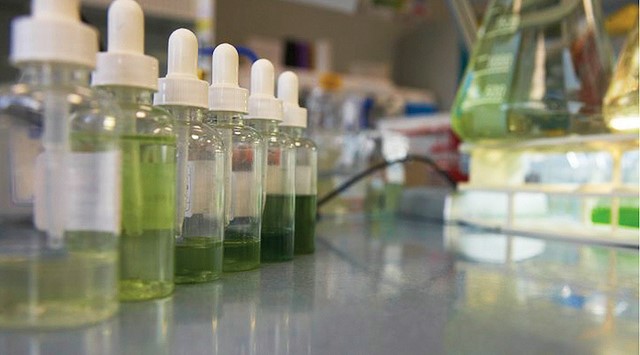 WASHINGTON — Harmful algae blooms have become a top water polluter, fueled by fertilizers washing into lakes, streams and oceans. Federal and state programs have spent billions of dollars on cost-sharing payments to farmers to help prevent nutrient runoff, yet the problem is worsening in many places. Here’s a look at the algae menace and what’s being done:

Among the oldest life forms, algae are simple aquatic plants that form key links in food chains. Some types of bacteria are also considered algae, including cyanobacteria, or “blue-green algae,” which is increasingly common across the U.S.

Scientists believe a combination of factors can trigger large blooms, including warm temperatures, slow water circulation and excessive nutrients, especially nitrogen and phosphorus. Among nutrient sources are runoff from farms and urban lawns as well as industrial wastes and sewage.

Some blooms generate toxins such as microcystin, which can cause nausea, fever and liver damage in humans and kill animals. A federal study detected microcystin in nearly 40 percent of lakes sampled around the nation, although mostly at below-harmful levels. Even when blooms aren’t toxic, they can turn waters ugly shades of green or other colors, stink like rotten vegetables, foul beaches and kill fish by sucking oxygen from the water as they decompose.

China’s largest blooms on record washed onto beaches in 2013 from the Yellow Sea, as bulldozers scraped up rotting mats by the ton. A bloom the size of Mexico spreads across the Arabian Sea twice a year.

University of Alberta researchers say microcystin has been detected in more than 240 Canadian water bodies. Lake Winnipeg algae blooms are so large that they’re visible from space.

IS CLIMATE CHANGE BEHIND THIS?

A study in the journal Science this year said nitrogen runoff into lakes, rivers and bays could increase 19 percent by the end of the century if greenhouse gas emissions keep rising.

Climate change research in the journal Environmental Science and Technology predicts the number of days U.S. reservoirs are infected with blue-green blooms could triple by 2050.

Congress first enacted legislation to deal with harmful algae in 1998 and has updated it several times, with another version pending. Critics say it’s too little and too slow.

A White House report last year said progress had been made in forecasting blooms and issuing warnings. The Governmental Accountability Office said 12 agencies had spent $101 million on studies and monitoring between 2013 and 2015.

But only in 2014 was the law updated to make inland waters a priority; the focus previously had been on coastal areas and the Great Lakes. Even then, no funding was included for inland water study.

And the law sidesteps the nutrient runoff problem, with no limits and no enforcement provisions.

WHAT ABOUT GOVERNMENT CONSERVATION MEASURES?

The Associated Press obtained data from the U.S. Department of Agriculture about the costliest of several programs that help farmers avoid pollution.

The agency awarded $1.8 billion between 2009 and 2016 for use of 45 practices intended to prevent fertilizer runoff.

The five most heavily funded included upgrading irrigation systems; managing brush growth; planting “cover crops” in fall and winter that hold soil in place and absorb fertilizers; stabilizing erosion-prone areas used by livestock; and developing plans for applying fertilizer in ways that will minimize runoff. Another popular measure is planting grass or other vegetation between croplands and streams.

Farmers in Texas, Kansas, Oklahoma, Indiana and Nebraska were pledged the most funding between 2009 and 2016.

Farmers in Sussex County, Delaware, a top poultry-producing area, received $17 million over the seven years, the most of any U.S. county.

For more AP coverage of algae:https://apnews.com/tag/AwashinAlgae