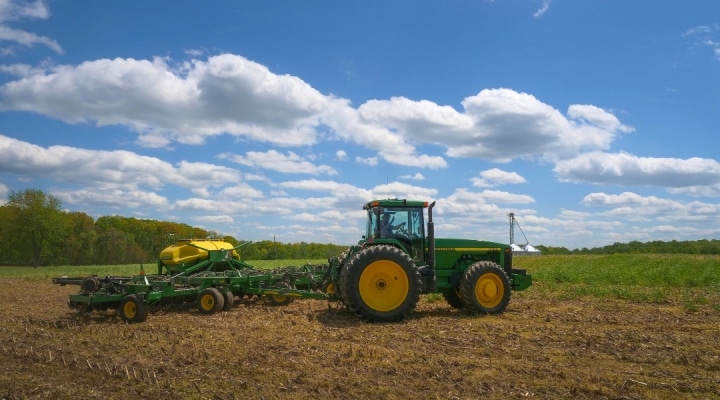 The group usually helps farmers beset by injuries, illness or natural disasters, but volunteers have this year been helping those taken out of commission by COVID-19. (Stock photo via U.S. Department of Agriculture, Public Domain)

WASHINGTON — The wet spring offered only a tiny window for planting, so when North Dakota farmer Paul Ivesdal fell ill with the coronavirus he knew the timing couldn’t be worse.

The 63-year-old man knew if he didn’t recover quickly and plant his crop of wheat, barley, canola and flax, it could mean an end to his decades of farming 2,300 acres (930 hectares) just south of the Canadian border. But his condition deteriorated and, due to the bad weather, even his neighbors had no time to help.

“We didn’t get some crop in,” Ivesdal said. “It just got too late and started raining again.”

That’s when Farm Rescue stepped in. When Ivesdal was rushed to a hospital where he spent eight days on a ventilator, volunteers from the nonprofit planted his crops and made sure his farm would endure.

Ivesdal spent the summer in rehabilitation, regaining the strength and ability to walk, and he said he tires more easily than before, but that he plans to continue working the land.

“If we wouldn’t have got what we did, I don’t know if I would have kept on farming,” he said. “I’d like to farm for a couple more years but if it wouldn’t have been for them we might have just decided to quit.”

The founder of Farm Rescue, Bill Gross, is a North Dakota native who grew up on a farm, but he did not follow in his parents footsteps. Gross went to college, became a pilot and has flown Boeing 747s for United Parcel Service for 27 years.

But in 2005, he launched Farm Rescue, inspired by the 1980s farm crisis that forced his parents to sell land and most of their cattle. He traveled to farm shows where he set up a card table and asked for donations. With help from a John Deere dealership, he bought a tractor and that first year provided assistance for 10 farming families.

Over the years, individual donors and big companies, such as Deere & Company and Chevrolet trucks, have stepped up, and Farm Rescue now has 1,000 volunteers nationwide.

The group has given assistance to about 700 farm families in the last 15 years in North Dakota, South Dakota, Montana, Minnesota, Iowa, Nebraska and Kansas. The group usually helps farmers beset by injuries, illness or natural disasters, but volunteers have this year been helping those taken out of commission by COVID-19.

“We’ve helped several farmers that have had COVID, including some who have been on a ventilator for three or four weeks and have survived and are back farming now,” Gross said.

The pandemic has rippled through the farm economy, leading to yet more bankruptcies.

“It’s affected farmers drastically. They were already at what I feel was the breaking point,” Gross said. “There’s been persistently low commodity prices, natural disasters and now COVID, and then when you add a major injury or illness to the challenges they already faced, it just can be overwhelming to them … financially and emotionally.”

Farmers and ranchers can apply for help from Farm Rescue by filing out an online application, and some are referred to the organization by concerned friends. Gross said many farmers initially resist the offer of assistance.

“They’re prideful, hard-working people and typically don’t want to ask for help,” Gross said. “Sometimes it takes convincing only because, God bless them, they always feel that there is someone else that needs the help more than them.”

The group is planning a country music benefit concert on Dec. 9, to be streamed live on YouTube from the Brooklyn Bowl in Nashville and featuring performers including Dustin Lynch, Maddie & Tae, Mickey Guyton, Travis Denning and Tyler Farr. Viewers can watch the event for free, but all donations will go to Farm Rescue.