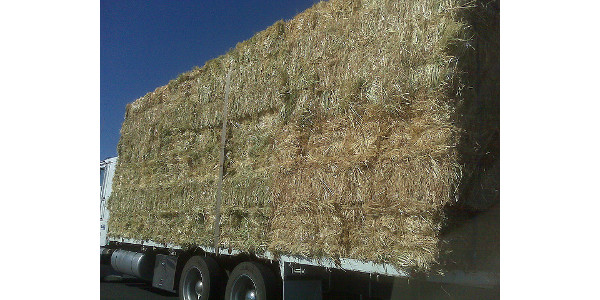 Farm Rescue's "Operation Hay Lift" has hauled 175 loads of hay amid the worst drought in North Dakota in decades, with another 100 loads planned, according to Operations Director Carol Wielenga. (Andrew Storms via Flickr)

Farm Rescue is adding livestock feeding assistance to its list of services that include crop planting and harvesting, haying, and hay and grain hauling. The new service will be offered throughout the organization’s territory, which has grown through the years to include North Dakota, South Dakota, Minnesota, Iowa, Montana and Nebraska.

“Livestock still needs to be fed when crisis strikes unexpectedly,” said Bill Gross, who founded Farm Rescue in 2006 and serves as its president.

The organization had been eyeing an expansion into livestock aid for months, with Gross saying last spring that he wanted to make the nonprofit a year-round operation, helping ranchers in the winter months when farmers don’t need help with crops.

Farm Rescue doesn’t dole out cash, but has about 1,100 volunteers who assist farmers in need. The organization relies on donated equipment and money donations, operating on an annual budget of just under $1 million.

The nonprofit reached a milestone last summer with its 500th case — a North Dakota rancher who had lost an arm in a hay-baling accident and needed help hauling in hay to get his livestock through the winter.

Farm Rescue’s “Operation Hay Lift” has hauled 175 loads of hay amid the worst drought in North Dakota in decades, with another 100 loads planned, according to Operations Director Carol Wielenga. Nearly three dozen truckers have donated their time, hauling hay from as far as Wisconsin.

Farmers should be aware of tax reform implications