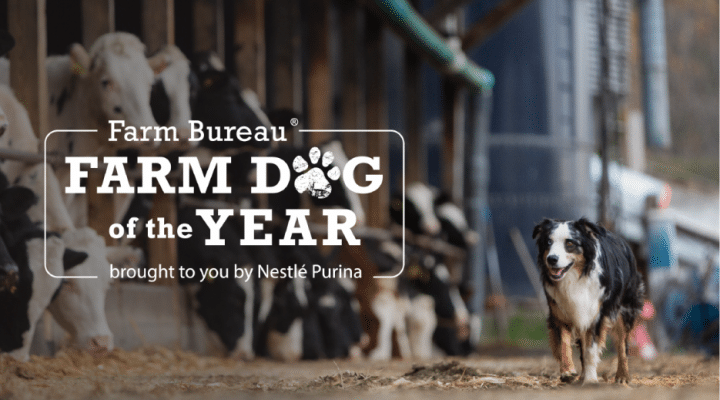 WASHINGTON — Recognizing that work on the family farm takes everyone pitching in and doing their part, including four-legged friends, Farm Bureau launched the Farm Dog of the Year contest three years ago.

“We’re proud to partner with Purina for the third annual Farm Dog of the Year contest, celebrating hardworking farm and ranch dogs and the role they play in helping farmers and ranchers produce our sustainable food supply,” said AFBF President Zippy Duvall. “From rounding up livestock to chasing off predators, a farm dog’s work is never done.”

The contest celebrates farm dogs that work alongside farmers and ranchers to produce nutritious food for families and their pets across America. The contest is popular with farmers and the general public alike, reaching nearly 400,000 users on social media through People’s Choice Pup.

Bindi, the grand prize winner of the 2021 Farm Bureau Farm Dog of the Year award, is five years old and has been part of the family dairy farm since she was a puppy.

“Bindi is especially good at working in tight spaces to help move animals around the farm. She stays calm even when the calves kick up their heels at her,” Sonja explained. Bindi’s also very protective, and once pushed back a heifer (young cow) that had pinned Sonja in the corner of a pen.

Much like their non-farming counterparts, farmers often benefit from a strong emotional connection with their dogs. “We do a lot of things together, and she’s a big source of joy in my life,” Sonja said about Bindi. 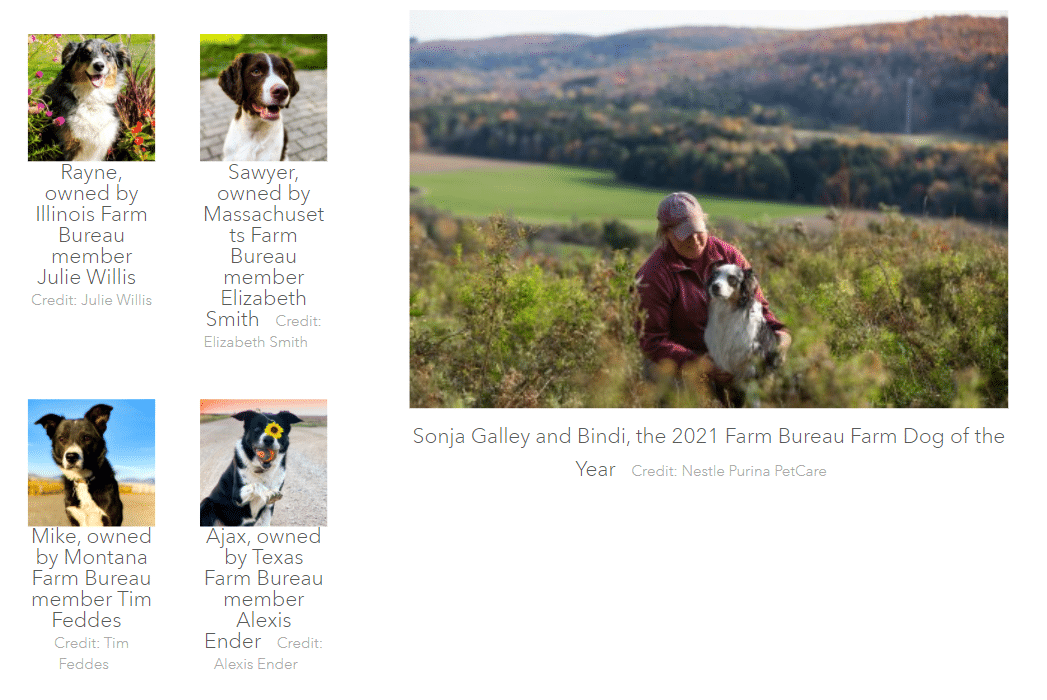 Purina donated prizes for the contest again this year. This included $5,000 in prize money, a trophy plate, a year’s supply of dog food and other Purina products for Bindi. The company has been helping dogs and cats live longer, healthier lives through scientifically based nutritional innovations for more than 90 years.

“The Farm Dog of the Year contest embodies Purina’s belief that people and pets are better together, and we are proud to help recognize the Galleys, Bindi and all of the great farm dogs across the U.S.,” said Jack Scott, vice president of sustainability at Purina. “Purina has a long history of sourcing nutritious ingredients from American farms to make our high-quality pet foods. We salute farmers and the important work they do to steward their land and help feed generations of people and pets, with the help of their amazing dogs who help enrich lives on and off the farm.”

Four regional runners-up in the contest will each also receive $1,000 in prize money, a trophy plate and Purina products. They are:

A panel of judges with expertise in the pet care industry, veterinary medicine and communications reviewed 90 nominations to select the 2021 Farm Dog of the Year.

Judging criteria included the dog’s helpfulness to the farmer and his/her family, playfulness and their role in making life better on and off the farm. Farm Bureau members submitted written responses to questions, photos and video clips to nominate their dogs for Farm Dog of the Year.

Learn more about the contest at https://www.fb.org/land/fdoty.

About Nestle Purina PetCare Company
Nestlé Purina PetCare creates richer lives for pets and the people who love them. Founded in 1894, Purina has helped dogs and cats live longer, healthier lives by offering scientifically based nutritional innovations. Purina manufactures some of the world’s most trusted and popular pet care products, including Purina ONE, Pro Plan, Fancy Feast and Tidy Cats. Its more than 8,000 U.S. associates take pride in the company’s trusted pet food, treat and litter brands that feed 49 million dogs and 66 million cats every year. More than 500 Purina scientists, veterinarians, and pet care experts ensure the brand’s commitment to unsurpassed quality and nutrition. Purina is part of Nestlé, a global leader in Nutrition, Health and Wellness.

Small towns are bigger than we think