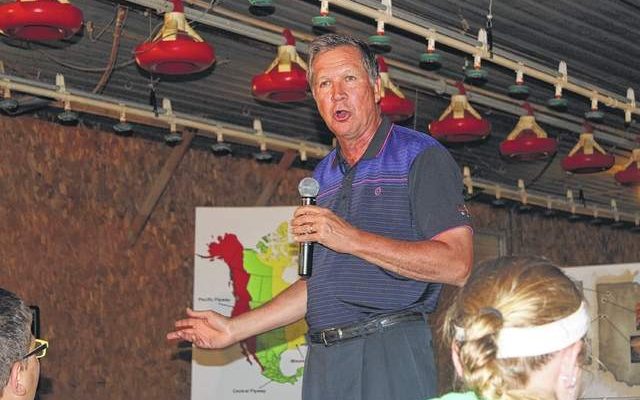 With no conversation with Ohio's agriculture community, the Kasich executive order would include regulation of over 2 million acres in northwest Ohio.

COLUMBUS, Ohio — Gov. John Kasich abandoned one of his most basic principles by announcing unilateral regulation of farming practices in an attempt to improve Lake Erie water quality. With no conversation with Ohio’s agriculture community, the Kasich executive order would include regulation of over 2 million acres in northwest Ohio.

Today’s executive order ignores the transparent and inclusive approach to the regulatory process Kasich promised with his “Common Sense Initiative.” Because the agricultural community was not included in the process, farmers are left with frustration, questions and uncertainty on both the process and implications of this order.

Kasich’s order has no realistic recognition of the time nor the financial or educational resources required for farmers to comply. Regulations created under the order may conflict with multiple layers of existing regulation. There are also significant concerns about the science applied, the processes through which the order will be enacted and the specific authorities of the multiple state agencies charged with carrying out the order.

Sharp said Farm Bureau will take the rare step of filing a formal public records request in order to gain clarity on some of these issues.

“We’re also curious why the order deals with only agriculture and not other pieces of the water puzzle, especially since the administration has prioritized other water quality initiatives instead of farm conservation programs,” Sharp said.

The Kasich administration said it has invested more than $3 billion to improve Lake Erie water quality. But an examination of the expenditures, reported by Cleveland Public Broadcasting station WCPN, found that only 1 percent of that money was used to address agriculture’s portion of the water quality challenge.

Farm Bureau supports the actions of the Ohio House and Senate in passage of Clean Lake 2020, which became law today. It provides funding of up to $20 million in a targeted phosphorus reduction fund, $3.5 million to support soil testing and the development of nutrient management plans, among other provisions, recognizing the complex needs of farmers in the process.

Working with the legislature — and the administration — is always the preferred approach to address agricultural concerns.