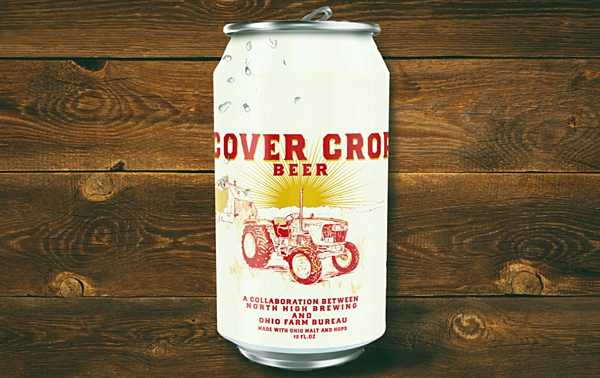 Cover Crop is a light-bodied, easy drinking golden ale that is crisp, refreshing and perfect for relaxing after a day of hard work in the office, factory or farm. The name Cover Crop honors the revival of a farming practice that sustains the land and its surrounding environment.

Cover Crop will be released in package and draft beginning in December and be available throughout 2019 wherever North High beer is sold.

Using local ingredients was important for both Ohio Farm Bureau and North High Brewing, which is a member of Farm Bureau. Cover Crop is to be brewed with local malt sourced from Rustic Brew Farm in Marysville, Ohio. Farm owner Matt Cunningham’s family has farmed nearly 100 years growing traditional row crops. They’ve been Farm Bureau members for most of that time. Within the past few years Cunningham added barley and a malting house to diversify the farm and create opportunities for future generations.

“Craft beer fans really appreciate local ingredients,” said Adam Sharp, Ohio Farm Bureau’s executive vice president. “Our partnership with North High Brewing connects us to Ohioans who enjoy knowing all about the products they buy. This is a fun way to celebrate our centennial and build some appreciation of Ohio’s agricultural community.”

Sharp said the name, Cover Crop, is appropriate. “It’s a practice used generations ago to improve the soil and is now coming back as a way to protect water quality,” he said.

“We’re excited and honored to craft Cover Crop with the help of Ohio farmers,” said North High Brewing brewmaster Jason McKibben. Creating a beer with Ohio ingredients is a fitting way to commemorate the Farm Bureau’s anniversary, he added. “It’s a way we can make a definite connection between our customers and Ohioans with the No. 1 industry in Ohio, which is agriculture,” he said. “It’s really just an honor — it adds gravity to what we do.”

The release of Cover Crop is part of a year-long centennial celebration for Ohio Farm Bureau. Other activities include a member only concert by country artist Chase Bryant, barn paintings and vintage collectables. The centennial celebration officially kicks off at the 2018 annual meeting Dec. 6–7 in Columbus.

Updates on Cover Crop and all aspects of the centennial celebration are at ofbf.org/centennial.