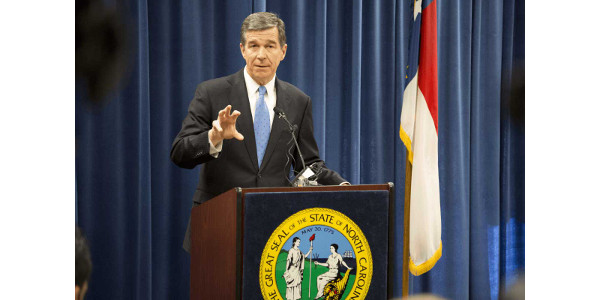 RALEIGH, N.C. (AP) — Unions in sparsely organized North Carolina are unhappy with Democratic Gov. Roy Cooper for signing a wide-ranging farm bill because it contained a last-minute provision that seeks to ensure growers don’t have to collect dues for organized workers.

Cooper announced Thursday the legislature’s annual agriculture measure was among six bills on his desk that he’s signed into law.

The legislation, approved on the second-to-last full day of this year’s General Assembly chief work session, includes a provision designed to prevent farms from being forced into future agreements to collect workers’ dues and transfer them to unions. Farmers also could not be required to enter into union contracts as part of settling worker lawsuits.

The Farm Labor Organizing Committee, the only agricultural worker union in the state, said the provision was aimed to block it from helping laborers improve their own working conditions through union agreements and litigation. A group leader blasted Cooper for “choosing to be on the wrong side of history” by expanding an anti-labor law first passed in the state in 1947 and vowed to challenge the new law in court.

“It is a shame that this Democrat and others refuse to stand on the side of the most marginalized working poor and the immigrant workers that keep this state’s economy afloat,” said FLOC President Baldemar Velasquez in a release. He said worker and immigrant rights groups had been hopeful for a veto after meetings with Cooper last month, before the union provision got debated.

Cooper offered no statement on the measure in Thursday’s announcement. Spokesman Ford Porter wrote later that “while the governor had concerns with this legislation, it supports North Carolina’s farming and agriculture industry and passed with broad bipartisan support.”

North Carolina’s workforce is consistently ranked near the bottom among states in the percentage of workers holding union membership. Pro-business Democrats and Republicans who have led state government over the past several decades have seen the state’s aversion to labor organizing as a plus to attract companies to expand in North Carolina.

The North Carolina Farm Bureau requested the union provision, a group spokesman said. Bureau President Larry Wooten said in a release the bill does not diminish farm worker pay or working conditions and “protects farmers from union pressure to join and collect dues on behalf of farm workers, a concern voiced by our farmers.” Wooten said federal immigration reform would resolve many of the issues involving immigrant farm workers.

The subject of at least one recent farm worker lawsuit was GOP Sen. Brent Jackson, a Sampson County farmer and a sponsor of the farm legislation. A settlement from the lawsuit, which involved allegations that workers at Jackson’s farm weren’t paid wages and other money due them, was finalized this week by a federal judge, according to court documents. Jackson and his farm denied wrongdoing.

The union amendment was proposed on the House floor by state Rep. Jimmy Dixon, a Duplin County farmer, about six hours before it received final legislative approval from both chambers June 28.